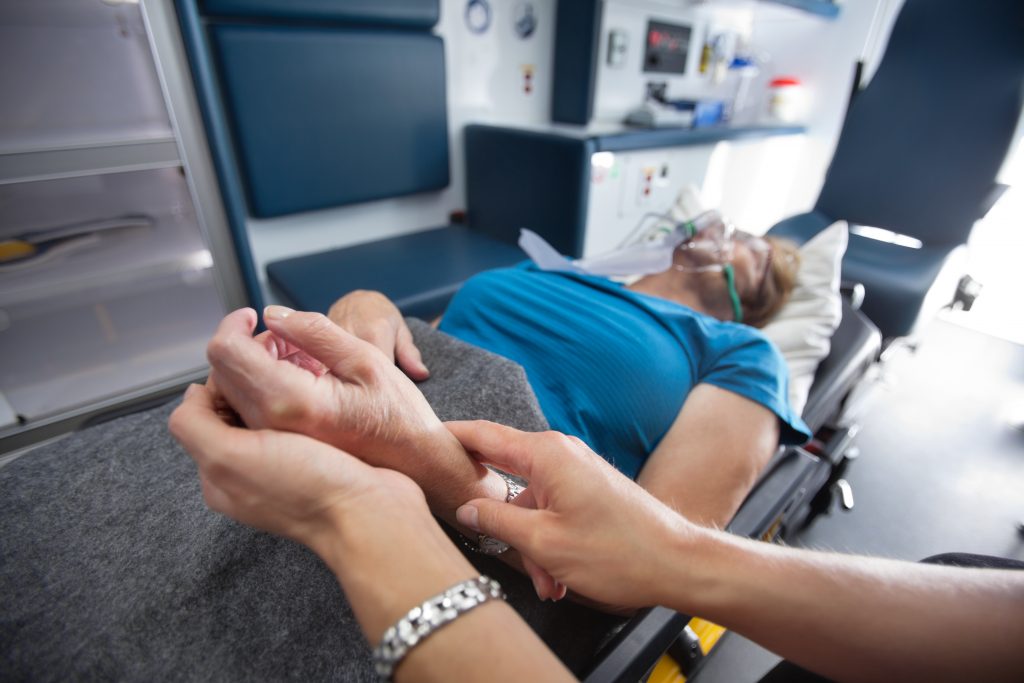 See and Treat is an organizational model introduced in the critical area by the NHS, as an assistance response to urgencies, to reduce the overcrowding. The purpose of the S&T is to evaluate and treat patients with minor codes in the shortest possible time rather than asking them to wait1. The basic principle is that a nurse, properly trained, is immediately able to assess, treat and discharge the patient safely after seeing him. It is also responsible for therapeutic treatments decision, even of a pharmacological nature, following well-defined protocols2. The nurse’s autonomy is understood not as competition between the different figures, but likes a collaboration in order to reduce the overcrowding, reduce the number of people who have left from the E.D., and ensure better assistance, freeing the doctor who can fully devote himself to the major codes3. In Emilia Romagna, Toscana and Lazio, the implementation of the S&T model, through the application of 44 protocols, has shown its effectiveness, especially in the management of waiting times and overcrowding, despite the criticisms and difficulties in implementation4.

The Emergency Department services are located on the border between territorial assistance services and hospital assistance services, ensuring their availability 7 days a week and 24 hours a day. The E.D. by its nature must respond quickly and appropriately to emergencies; therefore the assessment of the risk of inappropriateness of the services provided in the E.D. must be carried out starting from the analysis of the urgency level of the aforementioned services, identified by the triage code attributed to the reception5.
Inappropriateness access are to be found within white code (“non urgency”) and green code (“deferred urgency”).
The analysis of risk-free accesses allows: 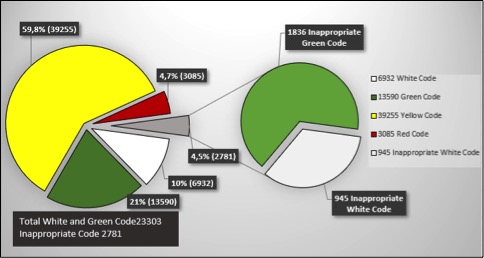 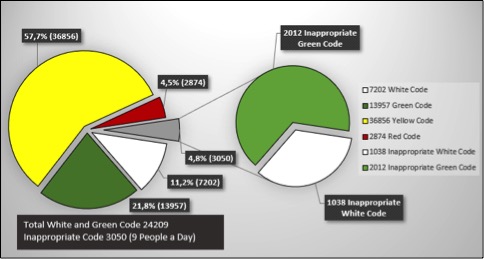 In 2017, the Green-White color code was assigned to about 24209 people. Despite the presence of the Fast Track, if we comparing the EMUR data of 2017 with the entries in E.D. of 2016, there has been a slight increase in the green codes and white codes and, most important of all, to an increase in the percentage of levels of inappropriateness of user entrances to 25.2%: 3050 patients, 9 people a day. We specify that not all people can be assigned to the S&T path, since it is necessary to evaluate the appropriateness / exclusion criteria with double control. The See and Treat is an English organizational model already present in the 1980s, spread like wildfire only 20 years later, thanks to the influence of the mass media. In 2003 it was introduced by the NHS in the emergency department of the Kettering hospital8.
The S&T provided that the patients, who presented themselves in the emergency room with health problems or minor traumas, were treated by the specially trained nursing staff. The professional figure of the Emercency Nurse Practitioner (ENP) was outlined for the first time.
The ENP is an appropriately trained nurse who, in possession of a university master’s degree, on the basis of pre-established protocols, is able to manage advanced practices autonomously: from anamnesis to an objective examination of the patient, from the prescription to the interpretation of diagnostic investigations. It is also responsible for the decision of some therapeutic treatments, including pharmacological ones9.
The innovation of the See and Treat spread in the different Emergency Departments of the United Kingdom, with a subsequent reduction in the time spent by the users and a reduction in the proportion of patients who spontaneously go away. All this has led to an improvement in the quality of perceived assistance10.
In order to respond to minor urgencies and to give space to health professionals who must deal with the most serious cases by shortening intervention times and reducing waiting times for those in need of care, in 200711  the Toscana Region proposes S&T model testing, whose practice will begin only 3 years later in 20104.
A few years later, also in Lazio region, with Res n. 384 march 20 2015, “the activation of nursing clinics on the See and Treat model” is provided.

Table 1: The 44 protocols treated with the S&T model in Toscana and Emilia Romagna

The study was carried out from 01/07/2018 to 30/07/2018 at the “SS Annunziata Clinical Hospital” E.D. A.S.L. n.2 Lanciano-Vasto-Chieti. Two questionnaires were delivered, one to users and one to medical and nursing staff, aimed to investigating the possible future formation of the new nursing figure with a S&T master’s degree.
The questionnaires valid for medical personnel with at least 5 years of service in E.D. there are 15 out of 17. Questionnaires administered to nursing staff with at least 1 year of service in P.S., certified BLSD, ACLS and qualified to do triage are 29 out of 37; The questionnaires instead administered to users with a green-white color code and between 18 and 65 are 161 out of 163.

Based on the results obtained, 92,55% of users are in favor of a hypothetical application of the S&T model and would entrust care to nursing staff. Among them, 64,60% say they have no particular concerns, 18,63% would feel safer to see a doctor, while 9,32% think that treatments might not be as good as those currently provided.
The questions were then addressed to medical and nursing staff. 95,55% stated that there would be a decrease in waiting times, a decrease in the time spent by users, and a decrease in workload, while 3,45% said they would not benefit;
The doctors totally agree that the S&T model would benefit with just one person. 89,66% of nurses and 93,33% of doctors are prepared for a trial period in the “SS Annunziata” Clinical Hospital, stating that the trial should be extended to all personnel. 60% of medical personnel do not have concerns about the application of the model, the rest thinks there may be an abuse of profession or that assistance may be affected because all differential diagnoses are not respected. The nursing staff, on the other hand, reported 62,06% that they had no worries; the remaining 37.94% do not feel like taking this responsibility because they believe they do not have the appropriate skills and experience or think it is not useful.
A further question was asked in the questionnaire; which practices, according to both medical and nursing staff, should not be managed by qualified nurses. Among the 44 protocols, the main concerns were: urinary tract infection, urticaria, recurrent acute low back pain and jaw dislocation, subconjunctival hemorrhage and isolated hiccups.

Doctors and nurses are in favor of a future introduction of the S&T model in the “SS. Annunziata “E.D.. The population is in favor of the treatment of minor green-white codes by the nursing staff even if about 30% think that the treatments are not adequate and prefer the doctor. There is still a lot of skepticism about the establishment of the protocols, even if, in other areas, the establishment of some of them such as the PHTC and the ACLS, has proved to be very effective. Most of the procedures listed by the doctors foresee the autonomous pharmacological administration by the nurse, according to well defined protocols and according to specific inclusion exclusion criteria. Regarding the abuse of the profession it should be noted that the nurse does not make a medical diagnosis, but observes and treats the patient and discharges him only if it is his responsibility. Otherwise, please refer the visit directly to the doctor of E.D. or at the specialist clinic on Fast Track. Despite the concerns that the introduction of S&T would entail, 96.55% of nurses and 93.33% of doctors agree that the model would certainly lead to a benefit in the E.D. of the clinic “SS. Annunziata” with a workload and waiting times fall, a decrease in residence times, but above all better user satisfaction.