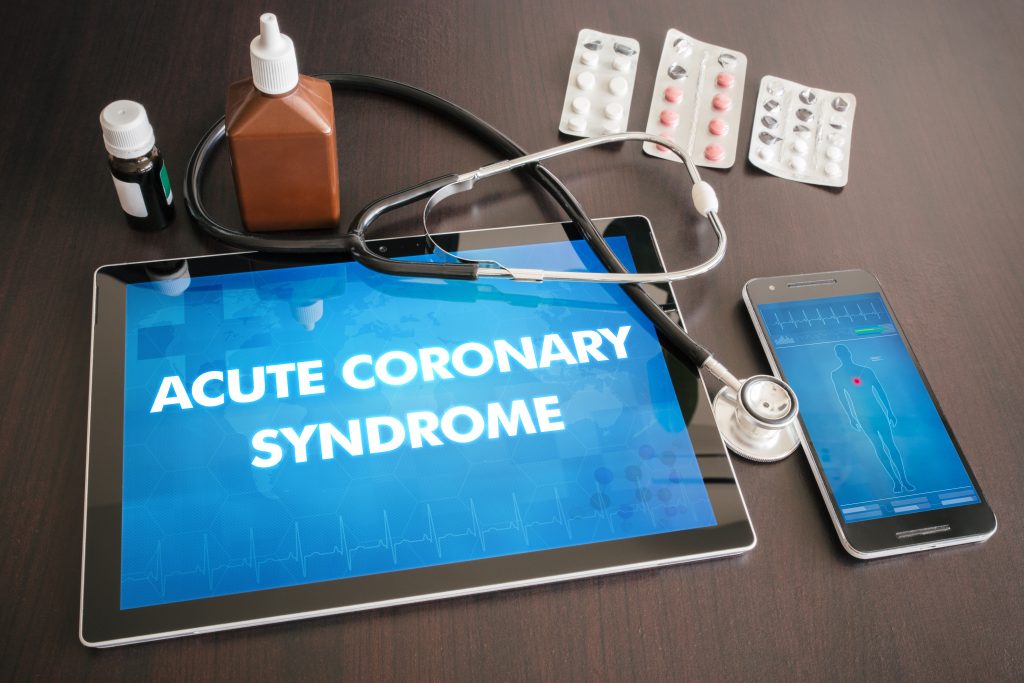 Introduction
High sensibility cardiac troponin T (hs-cTnT) is an important biomarker used in the diagnosis of Acute Coronary Syndrome (ACS). It is highly sensitive but has no high specificity; some conditions could in fact determine a chronic rise in its levels not often related to ACS: one of these is Chronic Renal Failure (CRF). In our study we wanted to compare the hs-cTnT values in NSTEMI patients detected in a CRF and non-CRF population, in order to improve the diagnostic process.

Materials and Methods
185 patients admitted to ED with chest pain and negative ECG for STEMI were recruited, to whom the troponins were measured according to the standard protocol (0-3h-6h) and the method “Test Elecsys Roche”. The patients were first divided on the basis of Glomerular Filtration Rate greater or less than 60 ml/min/1.73m2. A subdivision was then made, based on the gender and the results of the diagnosis (NSTEMI+ and NSTEMI- patients).

Discussion and Conclusion
The analysis of data allows us some considerations in patients with CRF: as regards the pattern of the curve in the female gender, the absence of a significant delta in all three measurements does not allow us to exclude certainly the diagnosis of NSTEMI. In the male gender, there is no significant delta in the first two measurements, but a third dosage often reveals an increased peak, which must be considerate to avoid missing diagnosis. The sample needs to be expanded to validate the correct basal troponin value, which represents a fast and useful tool in the emergency settings.

Timely recognition of chest pain is one of the main challenges in the emergency settings. The introduction of the hs-cTnT (high sensibility cardiac troponin T) dosage increased and considerably simplified the diagnosis of NSTEMI ACS but, on the other hand, led to an increase in improper misdiagnoses1,2,3,4. Several studies have in fact observed that there are some other different conditions that determine an increase in its levels: one of these is Chronic Renal Failure (CRF)5.
Patients with CRF frequently have a chronic elevation of troponin values ​​above the 99th percentile, which reduces their diagnostic utility in the suspicion of NSTEMI ACS. Referring to the study of the AHA “Cardiac Troponins for the Diagnosis of Acute Myocardial Infarction in Chronic Kidney Disease”6, there are two main hypotheses to explain the raising of troponin levels in patients with Chronic Kidney Disease: according to the renal hypothesis, troponin clearance is impaired by loss of glomerular function. The extrarenal hypothesis suggests that the pathophysiological elements that characterize chronic renal disease seem to be able to cause a stress on myocardiocytes, whose lysis liberates a greater quantity of troponins5,6,7,8,9.
Our study wanted to compare in a population of chest pain patients, the values ​​of hs-cTnT measured in non-CFR10,11,12,13 and CRF patients (identified by GFR lower than 60 ml/min/1.73m2, according with stage G3a of KDIGO classification14). We therefore wanted to study the growth curves of troponin levels detected according to the standard protocol (0h-3h-6h)15, the modalities of the increase in the CRF population, compared to non-CRF patients, for the purpose of detect any peculiarities in the patterns.

185 consecutive patients, admitted to the Emergency Department with chest pain and negative ECG for STEMI, were recruited as part of TROCAR study, promoted by the National Institute of Health, which involved several Italian EDs. The CDK-EPI (Chronic Kidney Disease Epidemiology Collaboration) formula16 was used to calculate the GFR of all patients, and they were divided in 2 groups: patients with GFR greater and less than 60 ml/min/1.73m2; which corresponds to the higher limit of the G3a band (GFR between 60 ml/min/1.73m2 and 45 ml/min/1.73m2) according to the international classification KDIGO14.
Troponin values ​​measured according to the standard diagnostic algorithm (Timing at 0h-3h-6h)15 and tritate with the method “Test Elecsys Roche” in our laboratory, and final outcomes (ACS+, requiring therapeutic coronary angiography and ACS-, other pathologies or discharges) were then taken into consideration. Ultimately a gender differentiation was also made.
The Student Test was used to compare the average troponin values ​​between the subgroups.
In addition, to verify the presence of a “hypothetical” different cut-off in CRF patients, the Fisher Exact Test was used.

Figure 1. Sample partition according to gender and GFR

The prevalence of NSTEMI appears to be greater in male gender and in the subgroup with GFR <60 ml/min/1.73m2 (Figure 2).

In the female group, we note that patients CRF+ and NSTEMI+ have increased troponin levels in all 3 measurements, with a stable trend and no rise in the value (Figure 3). 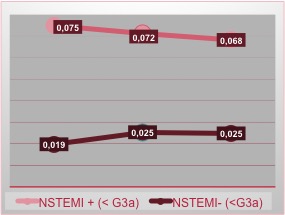 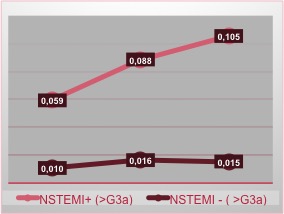 Unfortunately, the absence of this rise does not allow us to exclude the diagnosis of NSTEMI, forcing to use additional diagnostic tools.
On the other hand, the population CRF- (GFR > 60 ml/min/1.73m2) and NSTEMI+ has the curve with the already known trend described in literature.
As regards the male group we observe how the trend of the curve, in patients NSTEMI+ and CRF+, is steadily ascending with a sudden rise in the third measurement: it can be deduced that we should expect a rapid rise in this subgroup, so it is mandatory to keep continue the diagnostic pathway (Figure 4). 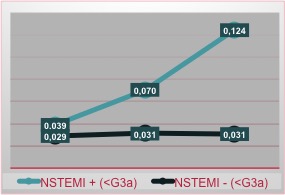 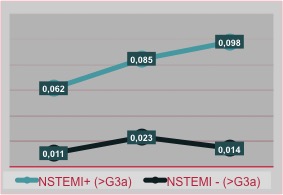 The curves in patients CRF-, both NSTEMI +/-, describes an ordinary known trend.
All data ​​measured in the NSTEMI+/CRF+ and NSTEMI-/CRF- groups, are statistically significant (p=0,0039; p=0,0319).
The average troponin value in all NSTEMI-/CRF+ (<G3a) patients was 0.024 μg/L, which is a higher value than reported in literature and in our labs (0.014 μg/L).
We have purposely not taken into consideration the gender, in order to obtain an easily evaluable data in the context of emergency room.

In light of the results obtained, we can assess a greater prevalence of NSTEMI in the male CRF+ sample compared to the female. In males, the canonical but steep pattern of the curve suggests us to carry out the third measurement to avoid missing diagnosis. In women, however, the flat trend suggests the need to use additional diagnostic pathways because the troponins alone may not be sufficient, even if the value is higher than the norm, but does not describe a peak.
The basal value (T0) of troponins in CRF+ and NSTEMI- patients differs considerably from the value of CRF- patients, which leads us to hypothesize that in CRF+ patients there is a chronic rise in the values ​​of troponin not related to ACS. That’s why we could “suggest” the troponin value 0,024 μg/L*, common to both genders, as an useful item to use in emergency setting, when we face patients with CRF (<G3a stage). However, it is very clear that it is necessary to enlarge the sample in order to improve the statistical power.

Limitations: the low numbers of the sample, also due to the subdivisions, requires to be increased, above all for the purpose of determining a special cut-off. The fragmentation operated to analyze gender differences and based on the renal function has inevitably decreased the statistical power.
Furthermore, what may have influenced the difference in the pattern of the curves, could be the time elapsed between the onset of chest pain and the T0 dosage of troponin: some patients, in fact, would have presented to ED very early and therefore the troponin levels could be still low. Other patients, on the other hand, would have presented late and therefore troponin levels could be already higher at T0.