A case of pheochromocytoma presenting with multiple organ system failure 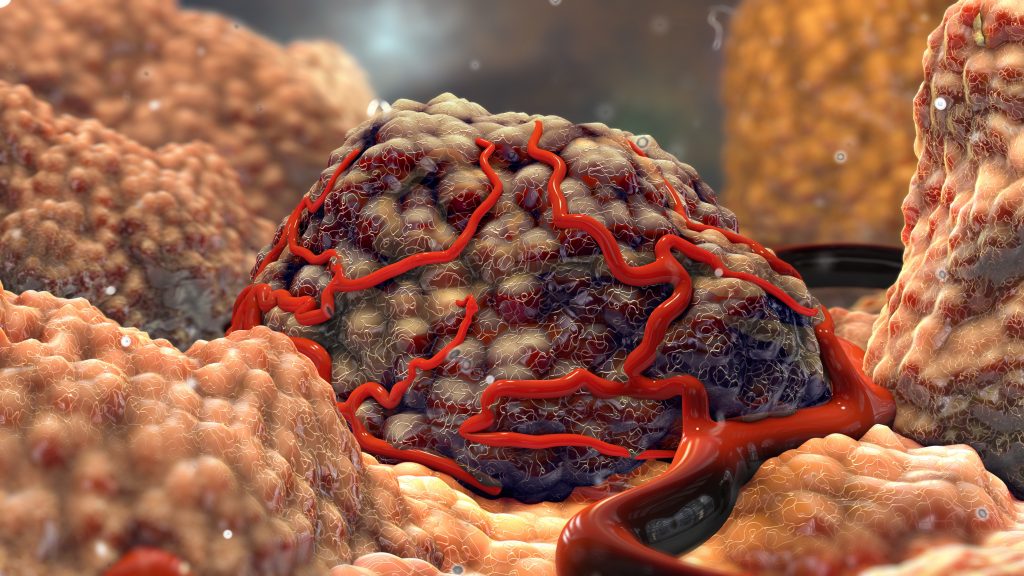 Catecholamine-secreting tumors (especially pheochromocytomas) are rare neoplasms which express symptoms in about 50 percent of patients, and the most frequent are hypertension, headache, sweating and palpitations1. Pheochromocytoma multisystem crisis is a rare potentially lethal condition characterized by hypertension or hypotension, hyperthermia (temperature > 40°C), mental status changes and other organ dysfunction which needs emergency surgery2. In our case a 58-years-old man came to the Emergency Department for abdominal pain, dyspnea, hyperthermia, and altered mental status. He presented a shock condition with multiple organ failure (respiratory, heart, renal and liver failure). We disproved the initial hypothesis (myocarditis and sepsis) through diagnostic investigations and because of the onset of other symptoms (paroxysmal hypertension and hypotension, headache sweating, agitation, and heartburn) we performed biochemical analysis which showed high levels of metanephrines and catecholamines.
Thanks to chest-abdominal CT, we identified a mass of the left adrenal gland; then, the patient was treated with alpha-adrenergic blockade and beta-adrenergic blockade and underwent surgery (left laparoscopic adrenalectomy) which confirmed the diagnosis of pheochromocytoma.

Catecholamine-secreting tumors are rare neoplasms which can be sporadic or part of familial disorders (in these cases they are more likely bilateral adrenal pheochromocytomas or multiple paragangliomas).
These tumors can be silent (accidentally found during investigations) or they can manifest with symptoms (most frequently hypertension, headache, generalized sweating, palpitations)1. Not always symptoms are obvious and it is possible to delay the diagnosis. In rare case, patients can arrive at the doctor’s attention because of a pheochromocytoma multisystem crisis, which is a rare potentially lethal condition characterized by hypertension or hypotension, hyperthermia, mental status changes and other organ dysfunctions which are treated with emergency surgery2.

We report the case of a 58-year-old man who came to the Emergency Department for abdominal pain, dyspnea, hyperthermia, and altered mental status. At the remote pathological anamnesis he reported systemic hypertension, type 2 diabetes mellitus, and paroxysmal atrial fibrillation. After an initial clinical evaluation and biochemical and imaging analysis, a diagnosis of shock with multiple organ failure was possible because of the presence of respiratory, heart, renal and liver failure.
In the suspicion of myocarditis, a myocardial biopsy was performed but resulted non specific. Sepsis was another hypothesis of the multiple organ failure so a broad-spectrum antibiotic treatment (vancomycin, levofloxacin and piperacillin/tazobactam) was started.
To look for the infectious focus, a chest-abdominal CT was performed which showed an expansion round mass of 4 centimeters of diameter by the left adrenal gland (Figure 1), also confirmed at MRI (Figure 2) 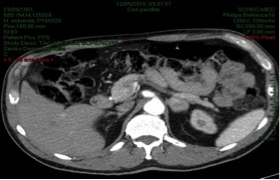 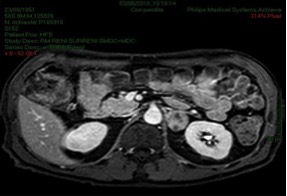 Catecholamine-secreting tumors are rare neoplasms which originate from chromaffin cells of the adrenal medulla (pheochromocytomas) or the sympathetic ganglia (in this case they are called catecholamine-secreting paragangliomas). They occur at any age but are most common in the fourth to fifth decade and are equally common in men and woman. Most of these tumors are sporadic; however, in a non-negligible percentage of cases (approximately 40 percent), they can be part of familial disorders which have an autosomal dominant inheritance (von Hippel-Lindau syndrome, multiple endocrine neoplasia type 2 and, less commonly, neurofibromatosis type 1).
Only 50 percent of patients with pheochromocytoma shows symptoms, and when present, they are typically paroxysmal. The most common symptoms are hypertension (both sustained and paroxysmal), headache, generalized sweating, palpitations, tremor, pallor, dyspnea, generalized weakness, and panic attack-type symptoms. The presence of all classic triad’s symptoms (episodic headache, sweating, and tachycardia) is described in a low percentage of patients1,3-5. Many other less common symptoms may occur and they include abnormalities in carbohydrate metabolism (insulin resistance, impaired fasting glucose, apparent type 2 diabetes mellitus), papilledema, weight loss, orthostatic hypotension, psychiatric disorders, increased erythrocyte sedimentation rate, visual blurring.
Pheochromocytoma multisystem crisis is a rare potentially lethal condition characterized by hypertension or hypotension, hyperthermia (temperature > 40°C), mental status changes and other organ dysfunctions which are treated with emergency surgery.
All symptoms are caused by tumoral hypersecretion of one or combinations of the following catecholamines: norepinephrine, epinephrine, and dopamine. For this reason, the diagnosis is based on biochemical confirmation of high values of these hormones (typically by measurements of urinary and plasma fractionated metanephrines and catecholamines)6 followed by identifying the tumor with imaging studies (CT, MRI, iodine-123 iobenguane scintigraphy and FDG-PET)1.
The treatment of adrenal pheochromocytoma is surgical and is preferable laparoscopic adrenalectomy by an experienced endocrine surgeon compared with open laparotomy7.
The preoperative preparation includes a pharmacological treatment with alpha-adrenergic blockade first and beta-adrenergic blockade at a later time8.

This case allowed us to discuss a rare but potentially lethal condition related to a late diagnosis of pheochromocytoma. Patient came at our attention with strikings but rare symptoms while, for years, he had complained of milder but more frequent symptoms. In fact, we carefully investigated the patient’s medical history and we discovered he has been suffering for years of presyncope episodes, nausea, and palpitations, especially during the squatting positions or abdominal compression.
Formerly he underwent investigations as Holter-ECG (which showed atrial fibrillation episodes), coronary angiography, thyroid function evaluation, etc. but no one decided to investigate pheochromocytoma as a possible cause of all the symptoms.
In conclusion, when a patient shows the symptoms described, even mild, it is important to think about pheochromocytoma as a possible cause, in particular, if no other plausible cause is found.