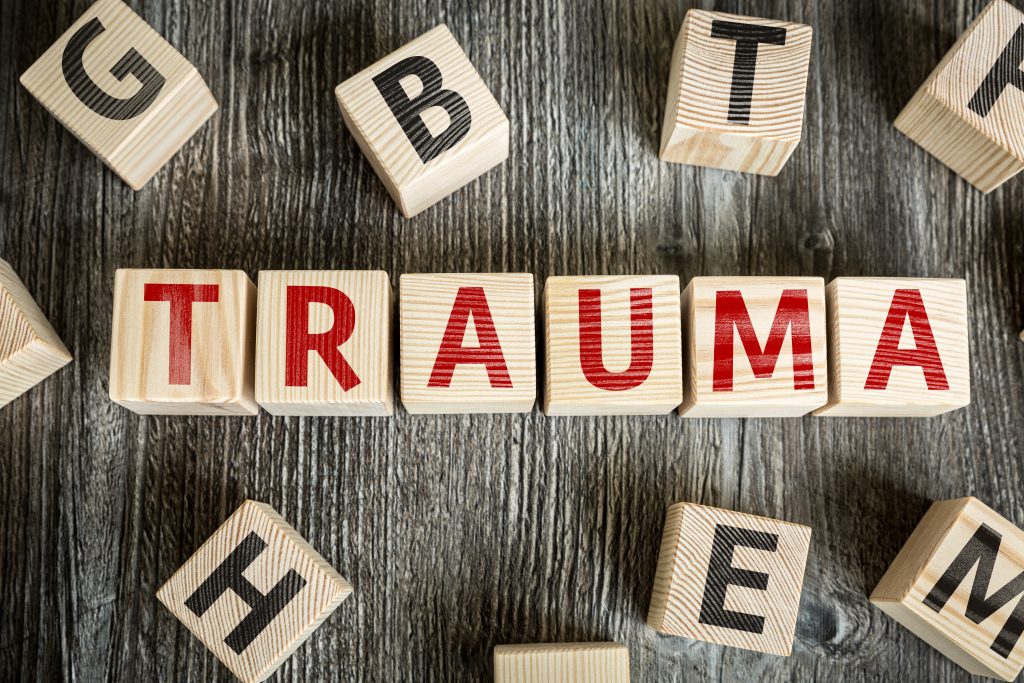 Introduction
Trauma still has a great impact in term of morbidity and mortality all over the world. In Emilia Romagna, a region of the north of Italy, the Integrated System of Assistance to Trauma (SIAT) was created to ensure the best management of prehospital and early in-hospital trauma patient.

Materials and Methods
We reporte and discuss the results of an experimental study done in Emergency Department of Ferrara; datas refer to management of prehospital and early in-hospital trauma patient in the biennium 2015-2016.

Results
Datas show an increase in cases handled in the hub center instead of in the spoke ones; anyway there was an increasing in centralizing patients in the regional Hub Trauma center.
Trauma Team was correctly activated, with an increasing trend. In addition, raising percentage of admission in ICU was associated with the raising percentage of patients treated in emergency medicine ward.

ConclusionsThis article allows us to reflect and discuss about prehospital and in hospital polytraumatized patient path. Thanks to this newborn protocol of centralisation, traumatic patients were uniformly managed in the Western Emilia Romagna SIAT; trauma had a multidisciplinary approach and more appropriate admission. This resulted in optimizing the whole process from the income to the outcome of the patient. Moreover, the hospital of the study showed to be ready to cover the amount of trauma, except for those patients who needed to an hyperspecialistic approach.

Traumatic pathology is the third cause of death in Western world, the first one among the population between 18 and 40 YO. 5 millions of deaths per year all over the world and twice as many cases of injury-related disability. In Italy deaths per year for trauma are 25.500, first of all due to car accident, than domestic and workplace ones.
The role of scientific research is central to improve such statistics and optimise pre-hospital and in hospital medical care of traumatic patient.

Letterature reports the temporal evolution of mortality for trauma as a curve with a trimodal distribution10: 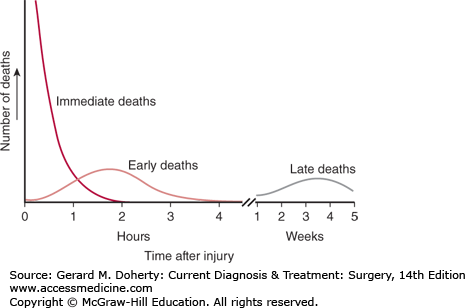 According to that distribution, the first mortality peak is due to injuries so serious to cause rapidly the exitus: the EMS can’t do anything to avoid the mortality.The second peak refers to the so-called “golden hour” of trauma, during which it is possible to take effective action: thanks to a rapid evaluation and treatment of EMS it is possible to influence significantly the mortality due to trauma1.The third peak depends to the events that occur weeks after trauma and it’s related on what happened in the initial management of trauma, including the golden hour.

In July 2004 the Senior Health Council, based on indication of the Health Department, produce a document to present the new management system of polytrauma7,21.
This news system is based on the immediate recognition of the most critical patients and their transport in hospital with resources and multidisciplinary team specialized in trauma. The document defined the conditions of traumatic patients to let them receive an appropriate prehospital and in-hospital assistance. According to that conditions in Emilia Romagna was defined the Trauma Integrated System of Assistance to Trauma model (SIAT)21.
SIAT is a network where all the acute care hospitals existing in the local territory with specificated elementary requirements (Spoke centers) rotate around a reference centre, able to provide an adequate assistance for all types of major trauma patients from the territory (Hub Center).
The characteristics of the model are the functional integration between territorial emergency service and hospital network and the “centralisation principle”, that allows to concentrate severe conditions in few hospitals with adequate resources.
SIAT model has the “Primary Centralization” as a mean approach: to transport immediately the patient to the final place of care. In case of impossibility to control and treat in the pre-hospital setting the respiratory and/or cardiocirculatory instability, patient should be transported to the nearest network hospital, regardless of the type of injury; in a second time, if necessary, patient can be transferred to superior level structure (trauma center) once vital function are stable (secondary centralization)21.

Emilia Romagna is an italian region and it’s divided in three independent SIAT, each one with an HUB center: 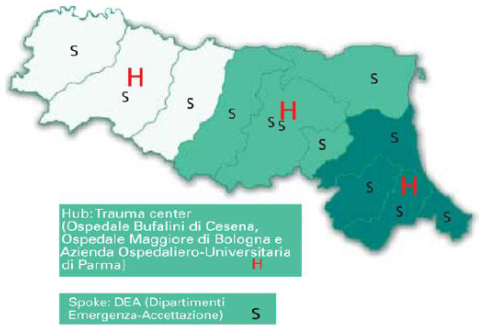 In every SIAT it is possible to distinguish three types of hospitals:

HUB center is the reference and coordination point of the territorial emergency network, thanks to relations with Spoke centers and shared protocols for treatment and centralization of complex cases.

SPOKE center is used to diagnostic and globally assist patients during different phases of disease and their eventually centralization according to shared protocols to HUB center.

The purposes of this service network are:

The expected effects for the application of SIAT model are:

In the EMD of Ferrara (CTZ of West Emilia SIAT) were analyzed data of severe trauma (according to corporate protocol) both in prehospital and in hospital management in 2015-2016.

In 2016 the total number of patient with code 2 was 468: 81% (380 patients) was treated in Ferrara, 16% in Spoke centers, 3% was centralized to Bologna. 55% of patients rescued by helicopter were carried to Ferrara hospital, the remaining part to Bologna.

In 2015 there were 34 patients with code 3; 94% was managed of provincial Hub center, with a centralization of 50% of patients; only 6% were centralized to Bologna. For those patients who required helicopter 72% arrived in Ferrara Hospital.

In 2016 out of a total of 37 patient with code 3, 81% was managed in Ferrara hospital, 16% of them was centralized in Bologna and 3% managed in Spoke hospitals.

In 2015 in the ER there where 256 patients with “traumatic red code”. Some demographic datas: mean age 54 yo, 61% male (157 patients). Activation of trauma team according to hospital protocol. In half of cases (51%) the trauma leader of prehospital rescue or the ER doctor did not activated the protocol.
In 2016 flows of information registered 232 patients with “traumatic red code”; mean age 55 yo, 66% male. in 50% of cases was activated trauma team protocol.

In 2015 out of total of 256 traumatic red code patients, 62% was discharged, admitted in ER with red code, 35% with yellow code, 3% with green code. 42% was admitted in Emergency medicine Department, 22% in ICU, 11% in orthopedic ward, 6% in surgical emergency unit, 5% in neurosurgery, 4% in pediatric surgery, 1% in internal medicine ward. 8 patients died in ER, 2 of them during the transport. 4 patients were discharged with green code. Only 2 patients were transferred to other specialized structures (Burn center of Cesena, cardiac surgery of Bologna).

Same data were analyzed in 2016: 232 patients in Ferrara ER were admitted with red traumatic code. 54% discharged with red code, 42% with yellow code and 4% with green code.

36% of them were admitted in emergency medicine ward, 17% in ICU, 13% in orthopedic ward, 12% in surgical emergency unit. 1 patient transferred to Burn Center, 8 died and 13 discharged with green code.

In 2015 there were 108 patients admitted in Emergency Medicine ward, 88 patients discharged and 19 transferred; only one patient died.

In 2016 out of total of 85 patients, 77% was directly discharged from emergency medicine, 21% transferred to other ward; 2 patients died during the recovery.

Trauma is a reality in continuous evolution. During years we assisted to a significant and progressive improvement of trauma approach and management from pre-hospital phases, passing by ER stabilization phase, until the management in hospital departments.

However still today we can improve preventable deaths, by deploying resources.

In Ferrara reality as provincial Hub hospital – high speciality Spoke hospital in SIAT Est Emilia, analysis of data about severe trauma in biennium 2015/2016 shows that thanks to centralization protocol patients were uniformly treated and managed; an increasing number of patients were treated in the provincial hub hospital of Ferrara, reducing the number of patients that arrived in spoke hospitals. However in the same period there was and increasing number of patient primarily centralized to regional Hub of Bologna especially by helicopter, not only for those complexity.

The correct activation of Trauma Team, according to protocol, with an incrementing trend in last years allows best multidisciplinary management of trauma and admission in appropriate units for the best care of polytraumatized patient. The increasing percentage of ICU admission is now consistent with regional datas. The hospital under study can sustain quantitatively and qualitatively the numbers of provincial trauma, except for those patients who required a super specialized approach21.

This study allowed us to elaborate a subsequent article in which we take in exam the management of trauma in the regional Hub hospital of Bologna24.