Late-onset deficit of ornithine transcarbamylase: a case report and review of the literature 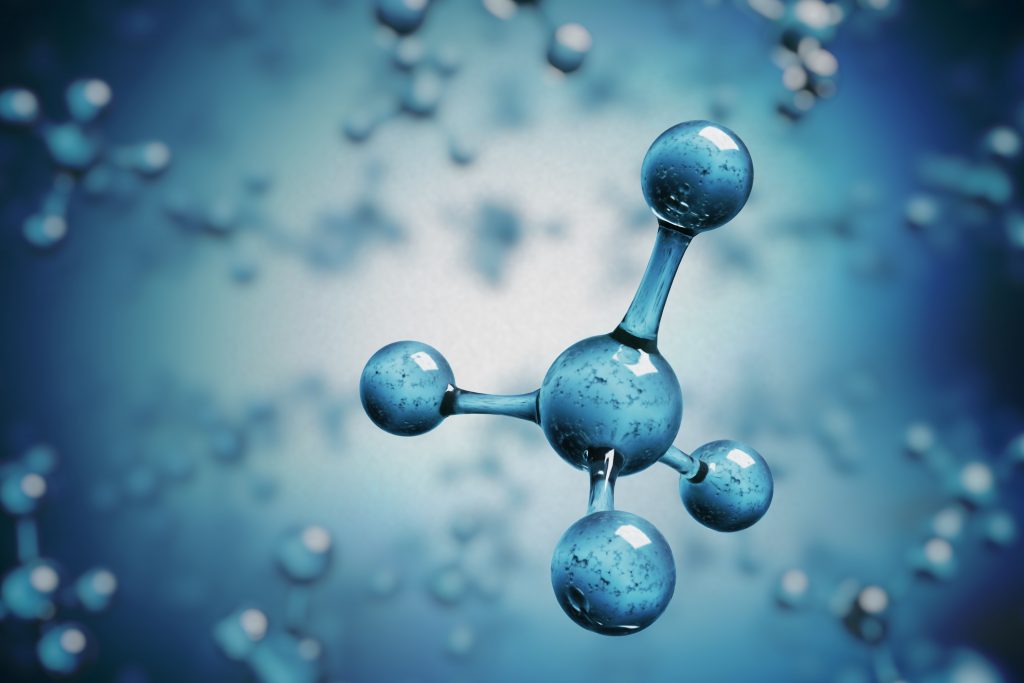 Hyperammonaemia can occur if there is an increased production of ammonia or when ammonia detoxification is affected. Ammonia crosses the blood-brain barrier and it is toxic because it may result in irreversible brain damage if not early and thoroughly treated. Causes of non-hepatic hyperammonaemic coma are not common while the urea cycle disorders are frequent. Ornithine transcarbamylase (OTC) deficiency is the most common of the urea cycle disorders, which can occur both in children, and less commonly, in adults. It is acquired as X-linked trait or a new mutation. In case of late-onset its recognition is difficult.

We report the case of a previously healthy 21 year-old white man admitted to our Emergency Room for a new-onset of slurred speech and nausea during the last few hours. He had inhaled spray paint  two days before. During the examination, he later showed aggressiveness and finally a rapid decline of his mental status leading to coma after a few hours. A specific intravenous therapy, based on arginine and sodium benzoate was administered to our patient.
Due to his persistently elevated serum ammonia levels, also hemodialysis (CVVHDF) was initiated. After more prolonged sessions, his level of consciousness did not get better also during transient progressive reduction of ammonia levels. Four days after, the patient was declared dead. A sequence analysis of OTC gene showed hemizygosis for the pathological variant known as c. 392T>Cp. (Leu131Ser) of OCT gene.

It is necessary to always consider ammonia levels in adult patients affected by unexplained coma. The correlation between plasma ammonium concentration and hepatic encephalopathy is not consistent, thus suggesting that other factors are important in producing brain edema. Case reports like this are important because they show that the late phenotypic expression of OCT deficiency carriers is the result of the interactions between environmental conditions and genetic anomalies.

Plasma concentrations of ammonia in the systemic circulation are normally very low (<40 µmol/L in adults, <100µmol/L in newborns)1.
Most of the systemic ammonia pool is originally generated in the gastrointestinal tract with the cleavage of urea in ammonia and carbonate by urease producing bacteria in the colon2.
The mucosa of the small intestine produces a large amount of phosphate-activated glutaminase (PAG) and little glutamine synthetase (GS). Both enzymes incorporate ammonia into glutamine which is released into the circulation. Glutamine is metabolized by PAG to ammonia and glutamate, which is oxidized to citrulline. Ammonia is carried to the liver and is converted to urea in the periportal hepatocytes, while citrulline passes into the blood and is incorporated into arginine in the kidneys3. Hepatocellular dysfunction results impaired clearance of ammonium by the liver7.
When the urea cycle does not control the ammonia load, hyperammonaemia appears. Ammonia crosses the blood-brain barrier and it is toxic only for the brain. The astrocytes contain 80% of brain GS and can incorporate ammonia into glutamine. Hyperammonaemia may result in irreversible brain damage if not early and thoroughly treated6, infact patients died from acute hyperammonaemia have gross cerebral edema and the astrocytes are swollen4-5.
Without effective treatment, hyperammonaemia causes clinical symptoms such as vomiting and after, somnolence, disorientation until coma and death. Occasionally the onset is not specific and it is attributed to neurological and psychiatric disorders or seizures.
The correlation between plasma ammonium concentration and hepatic encephalopathy is not consistent, thus suggesting that other factors are important in producing brain edema8. The main prognostic factors are peak ammonia concentrations and duration of coma10.
Severe symptomatic hyperammonaemia which is not due to liver diseases is not common.
Hyperammonaemia can occur if there is an increased production of ammonia  (e.g. infections, drugs ecc.) or when ammonia detoxification is affected (e.g. inherited defects of the urea cycle, portosystemic shunts ecc.)9.
2 – Acquired: nutritional arginine deficiency
Table 1. Causes of non-hepatic hyperammonaemia in adults
Hyperammonaemia is classified as primary hyperammonaemia when it is directly affected by a defect of any of the involved enzymes or transporters of the urea cycle11.
For all enzyme, as well as for the two antiporters, there are known disorders when any of the encoding genes carries a defect12.
When the urea cycle is inhibited by accumulating metabolites or substrate deficiencies, the resulting hyperammonaemia is called secondary13.
Among all these disorders the most relevant group is the one of organic acidemia sas methylmalonic acidemias or isovaleric acidemias, in which there is an inhibitory action of specific metabolites on the function of N-acetyl glutamatesynthetase (NGAS) or Carbamoylphosphate synthetase(CPS1)14.
The metabolites of valproic acid having an inhibitory reversible effect on NAGS activity15.
Moreover, many substrate deficiencies may impair the urea cycle function through the inhibition of NAGS (lysinuric protein intolerance, fatty acid oxidation defects or defects of the carnitine cycle16).
Finally, there are forms of acquired hyperammonaemia.
The most frequent are  the ones due to an increased production of ammonia (urinary tract infections with urease-production organism, e. g. Proteus Mirabilis and some Klebiella species)17, in subjects taking drugs, as L-Asparaginase16 or in a few patients receiving parental nutrition (no further reports in literature after 2001)17.
Hyperammonaemia may be due to a inherited defect of glutamine synthetase (GS)18 or acquired GS deficiency after orthotopic lung- or bone-marrow transplantations19.
It was described in portosystemic shunting between portal vein and inferior vena cava where intestinal blood  is deviated  into the systemic circulation20.
In transient hyperammonaemia of the newborn (THAN) an open ductus venosus probably leads to a shifting of blood into the inferior vena cava21.
Taking  into account all these reasons we have to think of hyperammonaemia in all patients with encephalopathy  even if they have no liver diseases.
To this end, we hereby describe a report of fatal coma in a young adult with a congenital late-onset OCT deficiency.

A 21-years-old white man, previously healthy, was admmittedto the Emergency Room following a new-onset in a few hours of slurred speech and nausea.

The patient denied abuse of illegal substances during the days before. He was accompanied by his parents. They assumed that the manifestations were due to inhalation of spray paint (alkyd-urethane enamel) happened two days before.
In the morning he had  been already examined for sore throat, headache and emesis he had been experiencing for two days, without any associated symptoms. He was discharged with a diagnosis of suspected intoxication by inhalant chemicals.
Moreover, his parents reported that he had been showing a solitary  behavior for two years, and followed a disordered diet, rich in proteins and lipids and that he had been using  drugs (cannabis) up to two years before. No family history of epilepsy and neuropsychiatric disorders was reported.
On admission he was afebrile, his vital signs were normal, except for a sinus tachycardia (heart rate was 120 bpm). The neurological examination only revealed an ideo-motor slowdown. His Glasgow Coma Scale was 15.
Initial laboratory data showed normal leukocyte count with neutrophilia (85%), mixed hyperbilirubinemia (total bilirubin 4 mg/dL, non-conjugated 3.67 mg/dL), abnormal coagulation panel (PT INR 1.44, aPTT Ratio 1.24) and low fibrinogen levels (98 mg/dl, v.n. >200 mg/dl). The toxicological panel was normal (ethanol, amphetamines, barbiturates, benzodiazepine, cannabinoid, cocaine, methadone, opioid). Blood gas revealed both respiratory and metabolic alkalosis. The computed tomography (CT) scan of the brain without contrast enhancement was also normal. An ultrasound scan with Doppler of abdomen revealed normal hepatic parenchyma.
Over the first hour of admission, he began to cry, showing restlessness and aggressiveness; during the psychiatric examination 1 vial of intramuscular carbamazepine was administered to the patient showing a progressive lethargy.
For this reason, the patient  underwent a prolonged electroencephalography (EEG) that showed a slow background activity, interrupted by short pauses without electrical activity. 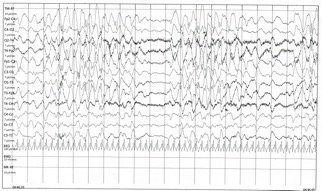 Figure 1. This electroencephaloghraphy portion of long-term tracing demonstrates background slowing in the range of 3HZ with brief intervals characterized by reduction of electric activity

Further diagnostic examinations such as magnetic resonance angiography (MRA) of the brain and total body CT were all normal. Considering his hypertonic response to nociception and the  bilateral signs of decerebrate rigidity, he was intubated for airway protection and admitted into intensive care unit. In order to prevent seizures, 1 vial of valproic acid was administered, after replaced with levetiracetam.
Later blood tests showed high level of ammonia (714 µmol/L). Consequently, a specific intravenous therapy, based on arginine and sodium benzoate, with an addition of protein-free nutritional support, was administered to our patient. Another brain CT was performed after 24h showing diffuse cerebral edema. 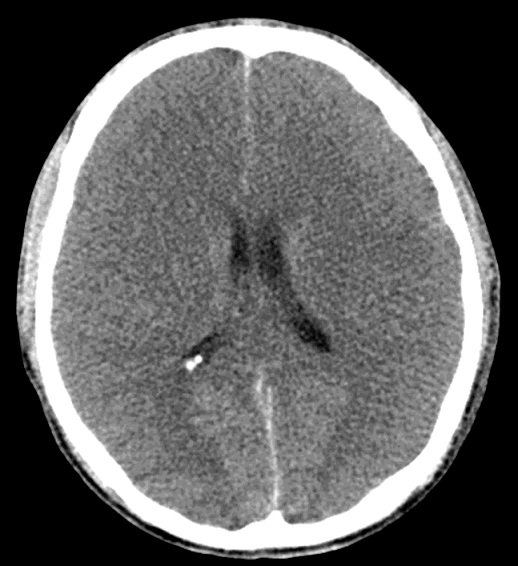 Urea cycle disorder was strongly suspected and so hemodialysis (CVVHDF) was initiated as well as plasma and urine amino acid analysis and urine organic acid quantitation were performed. After the second hemodialysis session we witnessed a transient progressive reduction of ammonia level without any observable improvement in his level of consciousness.
The blood test showed high level of glutamine, ornithine, arginine, lysine and normal level of citrulline, while the urine test revealed elevated levels of orotic acid (4,4 uM/M creatinine; v.n.<0,29). A liver biopsy was performed for genetic testing. The transcranic color doppler ultrasound, performed two days after the admission in ICU, certified absence of cerebral flow and four days later the patient was declared dead. The genetic testing was performed post-mortem by the CoNVaDING tool and confirmed by multiplex ligation-dependent probeamplification (MLPA).
The sequence analysis of OTC gene showed hemizygosis for pathological variant known as c.392T>Cp.(Leu131Ser) of OCT gene. 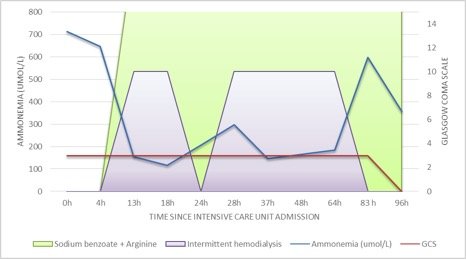 Figure 3. Diagram showing a timeline of the measured ammonia level in the serum, the level of consciousness (as GCS) in relation to ammonia scavenger therapy (arginine+sodium benzoate) and intermittent hemodialysis

The urea cycle is the main way through which the ammonium and nitrogen in excess bound to the amino groups are converted into urea and then excreted in the urine. It is the result of 6 consecutive reactions, three mitochondrial and three in the cytosol, and at the end of each cycle two nitrogen atoms are converted into urea, one that comes from ammonium and another from the amino acid pool, with the alanine as the main component, both channelled through aspartate.

Two transport proteins (vitrine and ornithine transporter-1) and an enzyme cofactor (N-acetyl glutamatesynthetase or NGAS) are also involved in the cycle22,23.
The 5 that catalyze the enzymatic reactions are:
Carbamoylphosphate synthetase (CPS-1), Ornithinetranscarboxylase (OTC), argininosuccinatesynthetase (ASS), argininosuccinatelyase (ASL) and Arginase (ARG).
These enzymes are present in the liver, intestines and kidneys but only in the liver reach levels capable of supporting physiological ureogenesis.
In order to work, the CPS-1 has absolute necessity of N-acetylglutamate (NAG), an allosteric activator produced by the reaction between acetyl-CoA and glutamate catalyzed by the enzyme NAG synthetase (NGAS).
The short-term regulation of the cycle is achieved through the action of the NAG on the CPS-1 and reflects the availability of acetyl-CoA, glutamate and arginine, the latter activator of the NAGS25.
The long-term control, on the other hand, is obtained through an altered enzymatic production, probably through the action of transcription factors and hormonal regulation.
A defect or absence of one of the enzymes or one of the 2 substrate transporters or co-factors determines hyperammonaemia26,27. 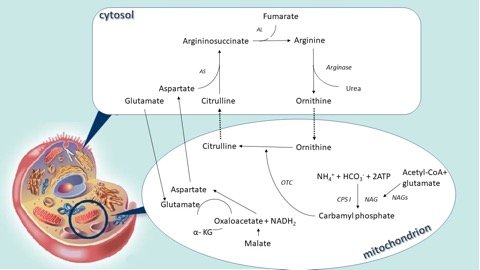 Urea cycle disorders are a very complex medical emergency, difficult to diagnose and treat especially in late-onset forms. Unfortunately, the rarity of these diseases with literature based on case reports, or expert opinions involves scientific evidence of Grade C and D with recommendations that are not infallible. Therefore, even case reports like ours, become important because they can improve the efforts aimed at a greater knowledge of the interactions between environmental conditions and genetic anomalies and that will then determine the late phenotypic expression of OCT deficiency carriers.