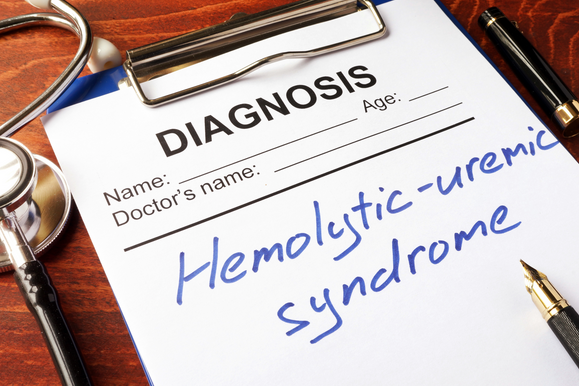 Hemolytic Uremic Syndrome (HUS) is defined by the simultaneous presence of non immune microangiopathic hemolytic anemia, thrombocytopenia and acute renal failure (ARF)1. It is one of the main causes of acute kidney injury in children under the age of three years2. It is typically divided into two large groups,according to the presence or absence of an association with diarrhea and Shiga toxin-producing Escherichia Coli (STEC)2:  HUS associated with Shiga toxin (typical form, STEC-HUS) and  HUS not associated with toxin Shiga (Atypical form, non-STEC HUS, aHUS)3.
The typical microvascular lesions of HUS, defined as “Thrombotic microangiopathy” consist of a thickening of the wall of small vessels (specially capillaries and arterioles) with swelling and detachment of endothelial cells from basal membrane. This phenomenon causes the reduction of the capillary lumen and accumulation of a morphous material in the subendothelial. The presence of platelets degranulate and material of endothelial origin in the vessel at the level of the microcirculation cause a partial or total occlusion1,3.

The STEC-HUS represents more than 90% of cases of HSU in children, mainly less than five years of age. The incidence of the disease is about 2-3 for 100,000 people with peak incidence in children under the five years of age (6.1 every 100000/year)1. Cattle are the main vectors of Shiga toxin, with the bacteria being present in the cattle intestine and feces. Infection in humans occurs following ingestion of contaminated undercooked meat, unpasteurized milk or milk products, water, fruits or vegetables3. The Non-STEC-HUS is a rare form and accounts for about 5-10% of all cases of SEU4. It occurs at any age, from the neonatal period to the adult age. Seventy percent of children have the first episode of the disease before the age of 2 years and approximately 25% before the age of 6 months3.

Typical-HUS usually occurs after an infection with enterohaemorrhagic toxin producing Shiga (EHEC) or Shigella5. Most cases are caused by E. coli 0157: H7; however, it has been observed that several other strains of E. coli are involved in the pathogenesis of the disease. In Italy, the principal strain was E. coli 0265. The Shigella dysenteries type 1 is associated with HUS in India, Bangladesh and South Africa. Although the pathogenesis of the disease is similar to that of secondary forms to infection of E. coli O157, the disease is generally more severe with a mortality rate in the 15th percentile and over 40% of patients develop end-stage renal disease (ESRD)3.

The pathogenesis of aHUS may result from several mechanisms, ranging from infectious processes (Streptococcus pneumonia, HIV), systemic diseases, drug administration (e.g. some chemotherapeutics, antibiotics and oral contraceptives), organ transaplantation (in liver, kidney, heart and bone marrow transplantation, the cause of HUS is the use of calcineurin inhibitors), autoimmune syndromes (Lupus Erythematosus, Rheumatoid arthritis, rheumatoid spondylitis) and in particular abnormalities of the complement pathway3,6. Complement-mediated hemolytic uremic syndrome are due to gene mutation of  complement factors (factor H, I, B, THBD, C3, CD46) or secondary to antibodies to complement protein(3-7). Recently some groups identified mutations in DGKE gene (encoding diacyilglyicerol kinasi  ε) in children with aHUS3.

Children with Stx-HSU present 5-10 days before a prodromal disease with abdominal pain, vomiting and non-bloody diarrhea which becomes hemorrhagic in 70% of cases usually within 1 or 2 days. HUS is defined by the sudden appearance of the following symptoms:
➢Microangiopathic hemolytic anemiais characterized by: hemoglobin levels usually below 8 g/dL; negative Coombs’test and peripheral blood smear with a large number of schistocytes, typical cells with “the helmet”.
➢The thrombocytopeniais characterized by a platelet count of less than 140.000/mm3 and usually it is at about 40.000/mm3, although it is rarely clinically purple or active bleeding.
➢Acute renal failure: the severity of renal involvement ranges from hematuria and proteinuria to severe renal failure and oligoanuria1.
HUS commonly affects other organ systems3,8:

Due to the rapid and severe progression of thrombotic microangiopathy, the diagnostic process must involve an immediate identification of the responsible syndrome in order to instate initial support measures4. Although laboratory diagnosis of EHEC infection can be made by stool culture, the bacteria are only present in the stools for a few days and, even if present, may not be detected by culture from stool samples2. In cases of suspected pneumococcal-HUS, infection by S. pneumoniae is diagnosed by identification of positive bacteriological cultures of body fluids (sputum/cerebral spinal fluid/blood/pus). In suspect of aHUS it is important to evaluate complement system. Complement analysis should include serum levels of complement factors and anti-CFH-antibodies. Low C3 levels may be observed in patients with mutations in CFH, CFI, CD46,C3 and CFB; however, normal C3 levels do not exclude the presence of a complement gene mutation or anti-CFH autoantibodies3,6. Renal biopsy, which is rarely performed, may be useful in selected patients where the diagnosis is uncertain.

The therapy of HUS must be primarily addressed to treat the characteristic symptoms of the pathology1,2
Anemia – Patients with HSU can become profoundly and quickly anemic and about 8% requires transfusion, when hemoglobin levels is <6 g/dL or hematocrit  is < 18%.
Thrombocytopenia – Platelet transfusion is reserved for patients with HUS that have significant clinical bleeding (platelet count rarely falls below 10,000/mm3).
Electrolytes – The electrolytic disturbances are common, secondary to acute renal failure. They include hyperkalemia, hyperphosphatemia and metabolic acidosis.
Dialysis – There is no evidence that early dialysis changes the prognosis of the disease. The indication for dialysis in children with HUS are similar to those in children with other forms of ARF.
Specific therapy
Represents the therapeutic approaches directed towards the pathogenetic mechanisms of HUS
Infusion of plasma and plasma exchange – Plasma therapy in the form of plasma exchange (PE) or plasma Infusion (PI) has been the gold standard of aHUS9. The efficacy of plasma therapy is presumed to be related to its ability to deliver normal levels of complement proteins and, when plasma is exchanged by apheresis, to remove mutant regulators, anti-CFH antibodies, and hyperfunctional complement components1.
Eculizumab – Eculizumab should be started in patients with no response to PE/PI within a few days or in those cases in which the presumptive diagnosis of aHUS is more certain6. This combinant humanized monoclonal antibody blocks cleavage of complement factor C5 and the formation of the complement membrane attack complex C5b-3,10. All relevant prospective controlled studies have documented the efficacy of eculizumab in the treatment of aHUS3,10.
Renal transplantation – While renal transplantation can be safely performed in patients with HUS D+, overall, renal transplantation is associated with approximately 50% of aHUS relapses.