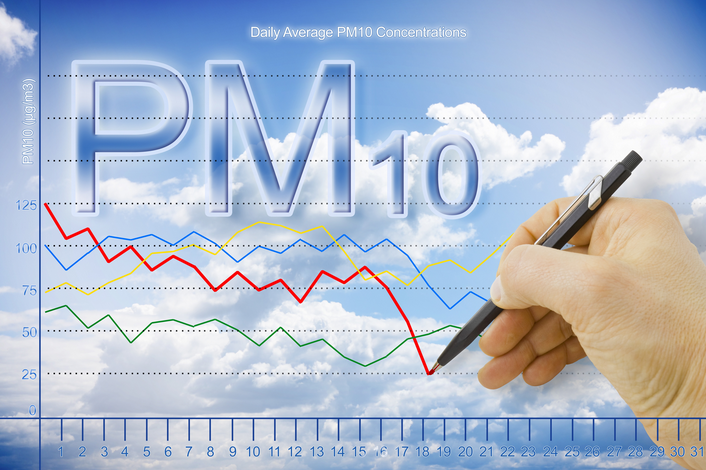 Background
In this retrospective observational study, we evaluated the correlation between the levels of atmospheric particulate matter (PM10 – PM2.5) in the urban environment and EMS calls. The aim of this study is to verify the hypothesis that the quantitative number of these calls could represent an index of short-term pollutant effects on human health and also be used for the collection of epidemiological data.
Methods
From 1st January to 31st December we anonymously collected data on all incoming emergency calls in Verona EMS Dispatch Centre, including degrees of severity assigned. We grouped these data on the basis of the relative pathologies. Data of PM10 and PM2.5 levels were collected from the database of the Regional Environmental Protection Agency. Data were analysed using GraphPad Prism® Software. We calculated the correlation between urban levels of PMs and the total number of emergency calls using the Pearson’s Correlation Test. Baseline characteristics were summarised using descriptive statistics. We considered statistically significant a p-value <0.05.
Results
We collected data on 42,489 emergency calls. Of these, 7,895 (18.6%) were for cardiovascular pathologies, 4,602 (10.8%) for respiratory, 3,965 (9.3%) for neurologic, 1,467 (3.5%) for psychiatric, 11,532 (27.1%) for traumas and 13,028 (30.7%) for other pathologies. The mean level of PM was 32.2 (±20.8) mcg/m3for PM10 and 23.6(±17.0) mcg/m3 for PM2.5.
A correlation with PM levels is shown by total emergency calls (r=0.0167 and p=0.0005 for PM10, r=0.0201 and p=0.0002 for PM2.5), respiratory (r=0.0421 and p<0.0001 for PM10, r=0.0623 and p<0.0001 for PM2.5) and cardiovascular pathologies (r=0.0116 and p=0.0036 for PM10, r=0.0167 and p=0.0006 for PM2.5).
Conclusion
Our study show a  association between environmental air pollution and respiratory and cardiovascular pathologies. The number of emergency calls to the Dispatch Centre has proved to be a plausible and sensitive index of short-term pollutant effects on human health and could be used as a data source for epidemiological studies.

Air pollution is a growing problem in all industrially developed countries and its impact on human health has become an important research topic in recent years. Pollutants with demonstrated impacts on human health include gases and particulate suspensions. These particles (either in suspension, fluid or in solid state), are of varying composition and size and are sometimes referred to as aerosols. They are often catalogued as ‘floating dust’, but are best known as particulate matter (PM). This floating dust is most often categorised according to its aerodynamic diameter. The aerodynamic diameter is the diameter of a sphere-shaped particle that shows the same behaviour in the atmosphere as a dust particle. In the framework of air quality problems, particulate matter (PM) is the most important. Particulate matters such as PM10 and PM2.5 are defined as the fraction of particles with an aerodynamic diameter smaller than respectively 10 and 2.5 micrometres (μm)2,3. These pollutants are most consistently associated with a variety of health risks, ranging from acute symptoms, morbidity and premature mortality to a range of long-term effects. These effects extend to children and adults and to a large number of particularly susceptible groups within the general population such as those already suffering from respiratory, cardiovascular and cardiac problems4.

Many epidemiological studies of emergency services have corroborated the association between environmental air pollution levels and acute morbidity/mortality, including increased risks of emergency room visits/hospital admissions, both for respiratory and cardiovascular diseases3,11.
The pathogenicity of PMs is determined by their size, composition, origin, solubility and their ability to produce oxidative stress6,9.
On the basis of available literature, it was hypothesised that the number of emergency room visits relating to respiratory and cardiovascular conditions could represent a sensitive index of short-term pollutant effects on human health1. The present study evaluates the correlation between PM levels in the urban environment and calls to the Emergency Dispatch Centre for each type of pathology (cardiovascular, respiratory, neurologic, psychiatric, traumatic and other).
The target was to verify the possibility of using Emergency Dispatch Centre data to perform epidemiological evaluations.

We conducted a retrospective observational study to evaluate the correlation between the levels of atmospheric Particulate Matter (PM) of different sizes (PM10 and PM2.5) in the urban environment and emergency calls to the Dispatch Centre of Verona city.
During the period 1stJanuary 2014 to 31st December 2015 we anonymously collected digitally aggregated data on all incoming emergency calls and all relative response codes. We then subdivided the data collected into groups according to the pathologies’ macro-areas and in compliance with International Classification of Disease (ICD) standards. The classification of pathologies was performed by trained nurses of the Dispatch Centre upon dispatching the Emergency Team. The classification was confirmed by the same Emergency Team on their return. The following pathology macro-areas were considered: cardiovascular, respiratory, neurologic, psychiatric, traumatic, other. We used only aggregated non-identifiable data digitally exported from EMS database so we exempted research from ethical review.
Data regarding levels of PM10 and PM2.5 were obtained from the Regional Environmental Protection Agency (ARPAV) through its two main monitoring centres in Verona city. Data represent the daily mean value of the two centres and are expressed as mcg/m3.
Data were organised into tables and then analysed using GraphPad Prism® Software (©2017 GraphPad Software).
We calculated the correlation between urban atmospheric levels of PM10 and PM2.5 and the total number of emergency calls using the Pearson’s Correlation Test and then we proceeded to subdivide the analysis for each type of pathology (cardiovascular, respiratory, neurologic, psychiatric, traumatic and other). Baseline characteristics were summarised using descriptive statistics. We considered statistically significant a p-value < 0.05.

Figure 1. Correlation between levels of PM10-PM2.5 and total emergency calls

Figure 2. Correlation between levels of PM10-PM2.5 and calls for cardiovascular pathologies

Figure 3. Correlation between levels of PM10-PM2.5 and calls for respiratory pathologies

The aim of the study is to demonstrate how the data collected through Emergency Dispatch Centres could correlate with air pollution levels in cities. This method could be used as an alternative to collecting data on emergency room admissions from different city hospitals6,7.
Our results show a statistically significant correlation between PM levels and total emergency calls for different pathologies and highlight the association between environmental air pollution and respiratory and cardiovascular pathologies. Regarding the physiopathology of the correlation between high PM levels and respiratory diseases, plenty of data and explanations are available in literature both for primitive pathologies and for exacerbations of COPD11.
On the other hand, the correlation between cardiovascular diseases and high levels of PM10 and PM2,5 is not completely understood and further research is necessary to clarify the pathophysiological correlation.
The results from this study are generally consistent with previously reported associations between environmental air pollution (measured as mean values of PMs) and respiratory and cardiovascular morbidity1,2. This is an original study as it demonstrates the possibility of obtaining epidemiological data from a single regional source rather than from different emergency rooms across individual hospitals, both simplifying the collection of data and facilitating the gathering of more complete data concerning the territory of interest. Considering this a first exploratory correlation analysis, further studies will be needed to verify the effective potentiality in more specific areas.