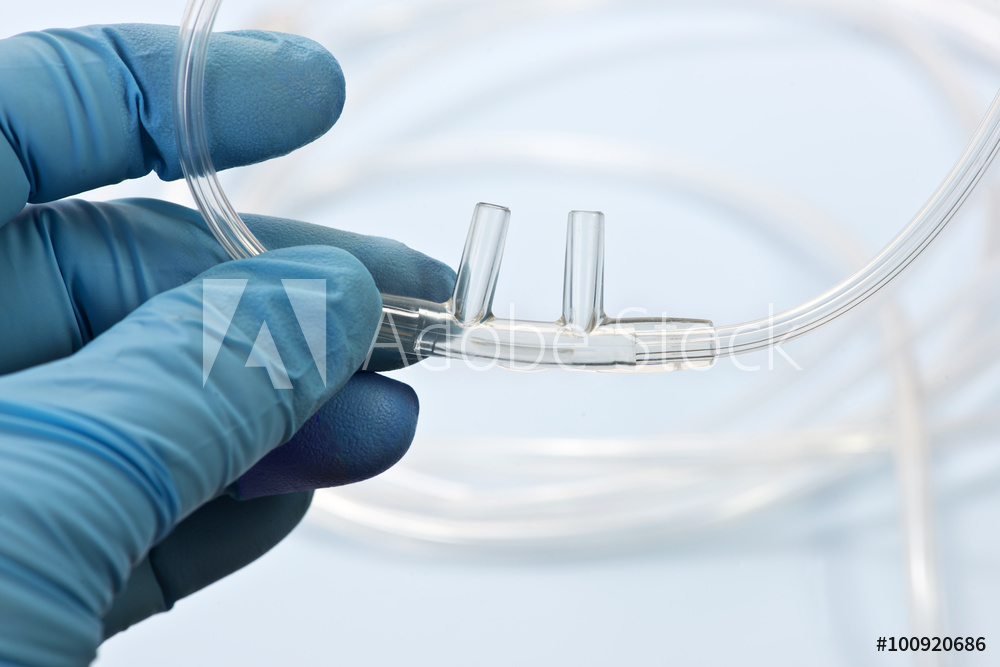 Acute respiratory failure (ARF) is one of the major causes of access to Emergency Department in Italy.
Oxygen therapy is the main treatment and is traditionally delivered through different devices (i.e. oronasal masks and nasal cannulas) that can provide a low or high oxygen flow depending on the patient’s needs.
Over the last few years a growing interest has been spreading towards a new technique which grants a high flow of heated and humidified oxygen. Traditionally this treatment is delivered through nasal silicone tubes, not occluding the nostrils, known as High Flow Nasal Cannula (HFNC) (see Figure 1). 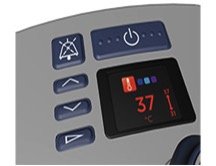 Figure 1. System for High Flow Nasal Cannula
Oxygen therapy with HFNC allows to deliver a flow of heated and humidified air with a constant FiO2 that can vary from 21% to 60% depending on the degree of hypoxemia of the patient. The flow of deliverable air ranges from 10 to 60 liters/minute, even if in the adult patient it is preferable to set a minimum flow of 40 liters/minute. The temperature can be set at 31, 34 or 37 degrees centigrade. A peculiar feature is to provide a totally humidified oxygen mixture: at 37 °C there is a content of 44 mg of H2O per liter, which warrants a 100% relative humidity.
In Pediatrics there is a well-established experience regarding the use of HFNC, which have significantly reduced the rate of orotracheal intubation in infants recovered in NICU affected by acute respiratory failure caused from bronchiolitis or other respiratory distresses. For this reason and the growing potential, they also diffuse in Pediatric Emergency Departments.
Even if clinical experiences concerning the treatment of acute respiratory failure in adults using HFNC, are relatively minor compared to Pediatrics’, nevertheless in the last years the Scientific Community has been very interested to this topic and many works about were produced.

The work is a prospective observational study that aims to investigate the efficacy of high-oxygen therapy flow through HFNC in the setting of Emergency Medicine. This took place in a period from July 2017 to June 2018 in the Emergency Department and in the Emergency Medicine Ward of the University Hospital Umberto I of Rome.
The inclusion criteria were: age > 18 years; presence at the arterial gas analysis of acute respiratory failure (PaO2< 60 mmHg and/or PaO2/FiO2ratio <300). The exclusion criteria were: hemodynamic instability; immediate need for orotracheal intubation.
The patients thus recruited underwent high flow oxygen therapy through the AIRVO2 device of Fisher & Paykel with a flow ranging from 40 to 60 liters per minute and a FiO2variable between 24% and 70%. Operators adjusted FiO2and flow to achieve SpO2≥ 94% for type I ARF and SpO2from 88% to 92% for type II one.
During our observation, frequent arterial gas analysis were performed: before starting the HFNC, at 12, 24, 48 and 72 hours from the start of the treatment and at the suspension.
Other blood and radiological tests performed in the ED together with the remote pathological anamnesis, were also collected.
The primary objective of the study was to verify whether oxygen-therapy with HFNC was able to determine a significant improvement of respiratory failure and respiratory distress using blood gas analysis (reaching an improvement of respiratory values) and clinical criteria (RR reduction). The secondary objective was to identify possible groups of diseases in which HFNC could have a particular effectiveness. The degree of comfort and compliance felt by patients and the occurrence of any complications were also assessed.

19 patients with acute respiratory failure were recruited: 12 patients were male, 7 were female. The average age was 66 years. Regarding the remote anamnestic report it was documented that 5 were affected by diabetes mellitus, 5 by dyslipidemia, 10 by arterial hypertension, 1 by heart failure, 2 by previous ischemic cardiopathy, 2 by atrial fibrillation, 2 by rheumatological diseases, 1 by chronic renal failure, 3 from psychiatric disorders, 2 from active neoplasia and 4 from thyroid disease. Regarding the proper respiratory history: 9 patients were affected by chronic obstructive bronchopneumopathy, 3 had a previous diagnosis of asthmatic disease, 2 were affected by fibrothorax, 1 had undergone total pneumectomy for previous tuberculosis, and at the end, bronchiectasis were found in 7 patients, 2 of whom were affected by cystic fibrosis.
By analyzing the cause underlying the respiratory failure: 16 patients had pneumonia, 2 patients had pulmonary contusion trauma-related and 1 patient had heart failure. These diagnoses were also supported by labs and imaging findings. All patients in fact performed a chest x-ray in 2 projections and 12 patients also performed a high resolution TC scan.
HFNC were used as first line oxygen-therapy only in 3 cases, in the rest of the patients they have always been used as second line therapy. In particular, at the time of initiating therapy with HFNC, 9 patients underwent oxygen therapy with Ventimask and 7 with Non Invasive Ventilation, including 4 patients treated with CPAP devices and 3 with NPPV ventilators. The mean FiO2 used, before starting the HFNC therapy, was 41.26% (min.21%, max.60%). In the oxygen therapy carried out with HFNC, an initial average FiO2 of 49% (min 26%, max 83%), an average flow of 50 liters/minute (min 40, max 60) was used, with an average temperature of 33°C (min 31°C, max 34°C). The average duration of treatment was 8 days (min 3, max 21).
Once initiating oxygen therapy with HFNC, frequent arterial blood gas analysis were performed after 12, 24, 48 and 72 hours, and one last at treatment withdrawal.
Regarding arterial gas analysis, it was decided to examine only some values ​​considered significant in order to evaluate the severity and the progression of respiratory failure in response to therapy: pH, partial arterial pressure of oxygen (PaO2), PaO2/FiO2 ratio, oxygen saturation of hemoglobin (Sat%), alveolar-arterial oxygen difference (Δ(Aa)O2) and arterial partial pressure of carbon dioxide (PaCO2). For each of these values ​​the minimum value, the maximum value, the mean and the standard deviation of each gas-analysis were examined. At T0 values ​​were: average PaO2 72 mmHg, mean PaO2/FiO2 ratio 189, average Sat% 93%, (Δ(Aa)O2) 179, average pH 7.38 and average PaCO2 49 mmHg. At the same time, the corresponding respiratory rate of the patients was also examined, the mean value was 30 acts per minute.
Statistical analysis of blood gas data showed an overall improvement in hypoxemia after initiation of HFNC treatment. The values that ​​changed with statistically significance were PaO2, Sat%, PaO2/FiO2 ratio, Δ(A-a)O2. When the HFNC treatment was discontinued, the mean PaO2 was 100 mmHg, the mean PaO2/FiO2 ratio was 304, the mean Sat% was 98%, (Δ(A-a)O2) was 93.
No significant variations were observed for what concerns the PaCO2 and the pH that, at the suspension of HFNC therapy, were 42 mmHg and 7.45 respectively.
In particular, the statistical analysis with Wilcoxon test revealed how the values ​​of PaO2 and Sat% were the only ones to differ with statistically significance already after 12 hours from the beginning of HFNC therapy and how this difference persisted at the suspension (see Table 1).
Table 1. Changes in arterial gas parameters over time: PaO2, Sat%
Regarding the values ​​of PaO2/FiO2rati and Δ(A-a)O2, the statistical analysis instead showed a significant difference compared to initial values, even ​​if in a later phase (see Table 2).
Table 2. Changes in arterial gas parameters over time: paO2/FiO2ratio, Δ(A-a)O2
For what concerns the trend of the parameters of PaCO2 and the pH the statistical analysis showed, respectively, no significant differences for the first and instead a significant difference, but only in a late phase, for the second (see Table 3).
Table 3. Changes in arterial gas parameters over time: PaCO2, pH
Regarding the analysis of PaCO2, a very interesting data was obtained from the application of the Wilcoxon test to the subgroup of patients suffering from hypercapnic respiratory failure. In patients with type II ARF and with initial PaCO2 ≥ 50 mmHg, both the PaCO2 and pH have indeed shown a significant difference already after 12 hours from the start of oxygen therapy with HFNC (see Table 4).
Table 4. Variations in the subgroup “hypercapnic respiratory failure” of the arterial gas parameters over time: paCO2, pH
A further subgroup analysis was performed for patients with bronchiectasis. The statistical analysis showed on the one hand a statistically significant difference in the PaCO2 values ​​after at least 24 hours, on the other hand a statistically significant difference in pH values ​​already after 12 hours from the start of HFNC (see Table 5).
Table 5. Variations in the “Bronchiectasis” subgroup of the arterial gas parameters in time: PaCO2, pH
The statistical analysis by Wilcoxon test performed on the respiratory rate parameter showed an important statistical difference already after 12 hours from the beginning of therapy with HFNC over the entire population recruited (see Table 6).
Table 6. Changes in respiratory rate over time

Our study showed that oxygen therapy with HFNC can be a valid therapeutic option in all hypoxemic acute respiratory failure patients. In particular, our sample was represented for the majority (84%) by patients suffering from pneumonia. At the current state of our knowledge the treatment of hypoxemia during pneumonia does not have a unique indication. If for severe pneumonia a patient should be managed in an intensive setting with a prompt invasive management of the airways, for cases of persistent hypoxemia, despite the conventional oxygen therapy, it is allowed the possibility of a cautious and very short NIV trial (1-2 hours).
The most significant risk of treatment with NIV in the management of the hypoxemic patient is the delaying of orotracheal intubation. Today it is a notorious element associated with a higher mortality rate especially in patients not affected by other comorbidities.
In recent years HFNC began to attract with increasing interest the Scientific Community and numerous studies have investigated their effectiveness in the treatment of type I ARF, including that due to pneumonia. Moreover, the FLORALI, the study that has caused the most uproar and that, to date, has marked the most prestigious point in favor of HFNC, has recruited a sample of patients of which 80% affected by pneumonia. The data in our possession would seem to be aligned with these works, confirming the efficacy of oxygen-therapy with HFNC but, in order to not delay orotracheal intubation, the execution of close analysis of blood gasses, especially in the initial phase of therapy, remains a crucial point.
In addition, our HFNC analysis was particularly effective in the treatment of patients with type II ARF (PaCO2>50 mmHg), which rapidly achieved a significant reduction in PaCO2 and a normalization of pH.
A surprising result was obtained in the subgroup of patients with bronchiectasis and intercurrent pneumonia. The action of the high flow of heated and humidified oxygen would seem to have an important action in the fluidification and therefore in the mobilization of the secretions, which led to an important reducing of work of breathing and producing a great advantage in those patients affected by primitive muco-ciliary clearance deficit.
Although, the number of patients recruited with hypoxaemia due to thoracic trauma (11%) is extremely limited, but even in this case our experience would seem encouraging.
Another fundamental element is that HFNC therapy is extremely tolerated by patients and therefore represents a valid alternative to NIV in case of poor compliance, even in the weaning from NIV.
In conclusion, we can therefore state that, based on our data, oxygen therapy with HFNC could be on the one hand a valid and effective treatment in patients with hypoxemic acute respiratory failure, and on the other hand a valid alternative to NPPV in the treatment of patients with hypoxemic and hypercapnic respiratory failure, especially if suffering from bronchiectasis. The management of these patients, even if with a not severely low pH, naturally requires a higher level of clinical and instrumental monitoring to avoid the risk of delayed invasive management of airways, where indicated.

For the purpose of its pubblication, the Author declare  of not being in condition of conflicting interest, even potential.