A case of tetanus in the emergency department 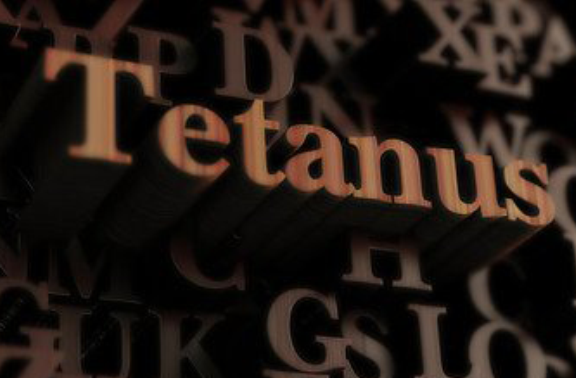 A 68-year-old woman presented to the emergency department affected by tetanus. The patient was promptly treated with antibiotic terapy. Subsequently, the patient was admitted to Intensive Care, despite her general condition were not serious. She was sedated and maxed out on curare; an intubation procedure was made by orotracheal route. Trasferred to the Intensive Care Unit,she was sedated by Fentanest and Diazepam in continuous infusion, began antibiotic intravenoustherapy with Ampicillin/Sulbactam 6 g x 3 times a day for 10 days and she continued the therapy with Metronidazole 500mg 4 times a day. After 18 days of hospitalization in the Intensive Care Unit, the patient was subsequently moved to a rehabilitation unit for further treatment. Studies have shown that inadequate vaccination and no-treatment of wounds remain the most important factors associated with tetanus. According to data from the international literature, older people are more likely to suffer from tetanus and mortality increases considerably over 65 years.

A 68-year-old woman presented to the emergency department with Yellow Triage Code, for strength loss and pain in the left upper limb by the previous day, associated with the appearance of dysphagia for about three days.
In the anamnesis, the patient presented chronic ischemic heart disease, dyslipidemia, and arterial hypertension.
The woman reported she was following a specific therapy at home: Phantoprazole20 mg – Ramipril5 mg – Atorvastatin20 mg- Acetiylsalicylicacid – Bisoprololo1.25 twice a day.
She referred that she did not suffer from allergies to drugs.
She also reported having injured by a rusty nail while she was in her farm in the previous week. The deep puncture wound was located at the level of the left foot plant, for which she had not made any antitetanic prophylaxis.
When the patient arrived at the emergency department, the initial examination revealed:
At the objective examination, the patient was already beginning to present difficulties in opening the jaw (Figure 1). 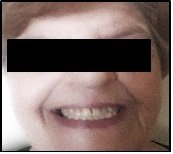 During her stay in the emergency room, the patient manifested seizures, caused by light stimuli, lasting several minutes. Diazepamwas initiated in the emergency department to control muscle spasms. Brain CT showed that all was substantially in the norm.
After the examination of the specialist in Infectious Diseases, diagnosis of tetanus infection was made, the following therapy began:
An excarectomy of the wound on the foot was also made and an accurate disinfection of the same was carried out. Clinical and instrumental examinations and EGA resulted in the norm.
Chest X-ray: “Accentuation of the chronical bronchitic pattern without evident acute inflammatory processes in progress. Free cost-phrenic breasts”.
EKG: “sinus rhythm at freq. 87b/min. Left axial deviation. Non-specific changes of ventricular repolarization”.
In agreement with the colleagues of the intensive care unit, the patient was admitted to Intensive Care Unit despite her general condition was discreet. She was sedated by Fentanil(0.5-15 mg/kg iv) and Diazepam (0.1-2 mg/h) in continuous infusion. and maxed; an intubation procedure was made by orotracheal route. Into the Intensive Care Unit,she began antibiotic intravenoustherapy with Ampicillin/Sulbactam6 g 3 times a day for 10 days and she continued the therapy with Metronidazole500 mg 1 fl (4 times a day)
After 18 days of hospitalization inthe intensive care unit, the patient was subsequently moved to a rehabilitation unit for further treatment.

Tetanus disease is an acute infectious disease caused by Clostridium tetani(Gram-positive, anaerobic, sporogenous bacillus) (photo 2) characterized by localized or generalized muscular hypertonia with paroxysmal exacerbations (spasms or tetanic accesses). The pathogenic action of Clostridium tetaniis carried out through the production of a powerful neurotoxin exotoxin (tetanospasmin) which is fixed to gangliosides, determining, in this way, the suppression of synaptic inhibition. Clostridium tetaniand its spores penetrate the body through continuous solution of the skin or mucous membranes contaminated with debris or ground.

The spores of the bacillus are ubiquitous and can survive for years even in unfavorable conditions as they are particularly resistant to physical and chemical agents(1).
Incubation period: from a few days to a few months (on average 4-14 days); the duration is conditioned by the type, extension and location of the wound.
The cause of these deaths is recognized in the inadequate vaccination practice and in the low prophylaxis of the wounds (2).
In the United States, 233 cases were reported during the period 2001-2008, with an unsuccessful result of about 26 cases (13.2%) (3).
Table 1 shows the annual rate of tetanus cases and tetanus deaths in the United States during the period 1947-2008, according to the compulsory registry of diseases of the surveillance system. 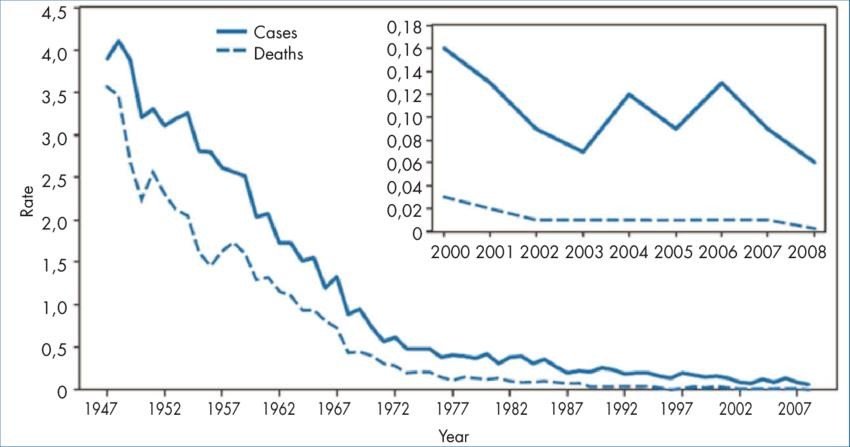 The incidence was about 1.2 cases per million inhabitants (table 2). 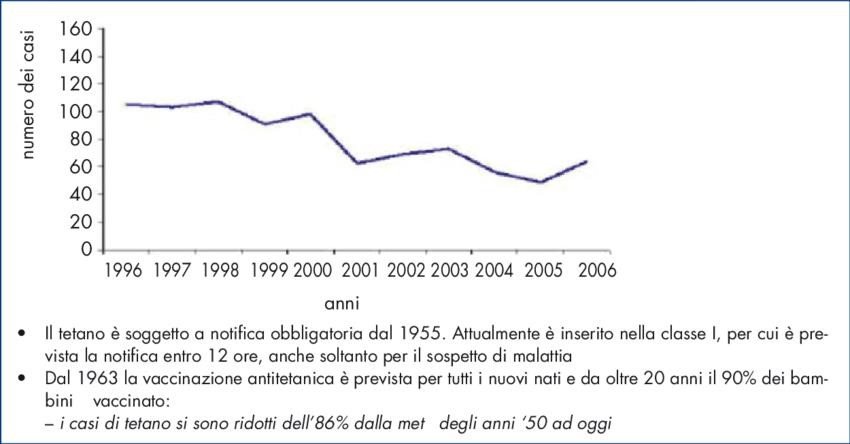 The incubation period may be characterized by some non-specific symptoms (headache, anxiety, local hyperesthesia). The clinical picture of the disease in progress is characterized by: high hyperthermia (39 °- 40 ° C), trismus, hyperreflexia, contraction of diuresis, stiffness of the neck and of the nape, tachyarrhythmia (that may be responsible for cardiac arrest), spasm of all the muscles of the face (Risus Sardonicus) and, subsequently, of all the other muscles of the body with a descending course (paroxysmal tetanus accesses may occur spontaneously or after small stimuli such as noises, bright, and mechanical stimuli), arterial hypertension, (secondary to hypertonia of the sympathetic).
The spasm of the respiratory muscles could be the cause of the patient’s death by asphyxia. The severity of the clinical picture is, in general, inversely proportional to the duration of the incubation period.
Laboratory diagnostics
The main laboratory exams that can be made are:
Diagnosis
The diagnosis of tetanus is above all clinical. The research of tetanospasmin, in fact, does not provide reliable results because the toxin is active even in small quantities (the lethal dose for humans is evaluated in less than 2.5 ng/kg), often not dosable.
Therapeutic protocol
In presence of very severe asphyxiated crises, the patient is curarized by d-tubocurarine(40-60 mg/day in continuous infusion) to allow assisted breathing using a Positive Pressure Expelled Ventilation (PEEP).
Prophylaxis
Clean the wound with hydrogen peroxide and surgical wound toilet.
The unvaccinated person who has reported a “high risk” wound must practice human tetanus immunoglobulins. In combination with tetanus immunoprophylaxis, they must begin the vaccination cycle with purified tetanus anatoxin (the dose should be repeated 6-8 weeks after the first administration and 6-12 months after the second; it is advisable to practice a booster dose after 4-5 years and the following after 5-10 years).
In association with tetanus anatoxin it is administered penicillin and as an alternative erythromycin.The prophylactic scheme is well illustrated in (table 3). 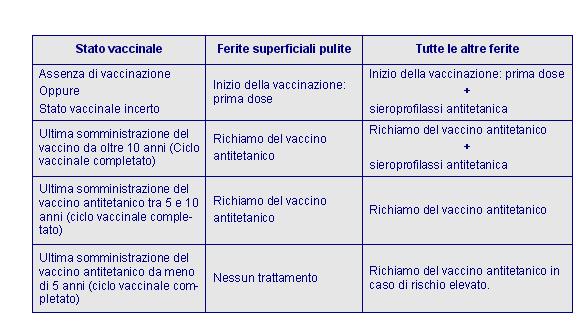 From this case and from the cases reported in the international literature, it is clear how often tetanus is a pathology that is underestimated not only by patients, but unfortunately often also by doctors. In fact, if a correct prophylaxis was done, the mortality rate would be greatly reduced.
In our emergency department, inadequate vaccination and no-treatment of wounds remain the most important factors associated with tetanus.
According to data from the international literature, older people are more likely to suffer from tetanus and mortality increases considerably over 65 years.(5)
This is probably associated with bad information, poor living conditions with hygienic scarcity, economic hardship.