The efficacy of hfnc in the treatment of bronchiectasis exacerbations: two operative cases 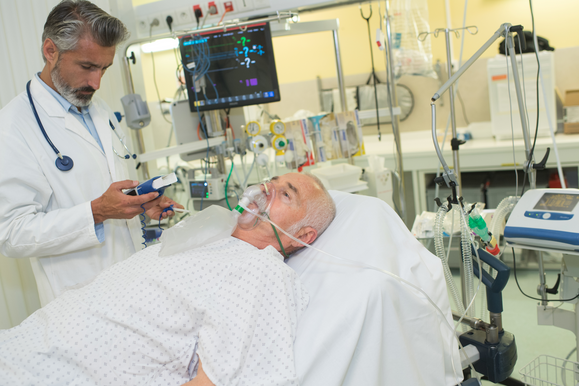 In the last few years high flow nasal cannula (HFNC) emerged as a very useful therapy in adult patients with respiratory failure (RF)1. HFNC provides, through non-occluding nasal prongs, a high flow heated and humidified medical gas with a FiO2 ranging from 0.21 to 1.0. Delivering a gas flow brought to body temperature and saturated with water, HFNC seems having numerous favorable physiological effect: a PEEP effect, a continuous wash out of anatomical dead space, a meaning improvement of mucociliary clearanceand a reduction of upper airway dryness2. Furthermore HFNC is better tolerated than conventional oxygen therapy (COT)3 and Non Invasive Ventilation (NIV)4. There is emerging evidence that HFNC may be effective in various clinical settings including: acute hypoxemic respiratory failure (AhRF)5,6,7, hypercapnic nonacidotic respiratory failure 8, OSAS9, pre-oxygenation before oro-tracheal intubation (IOT)10,11and peri-procedural oxygenation 12. Among them, the most promising seems to be the treatment of de novo AhRF including pneumonia. Recently some studies investigated the efficacy of HFNC in patients with bronchiectasis 13,14 and chronic obstructive pulmonary disease (COPD) 15,16,17, both airway disorders characterized by airway inflammation, mucus hypersecretion and impaired mucociliary transport. Although there is little evidence in the literature about the use of HNFC for the treatment of bronchiectasis and bronchiectasis-COPD exacerbations, we report two cases of acute respiratory failure (ARF) due to these pathological conditions successfully treated with HFNC.

An 82 years old woman was admitted to the Emergency Department (ED) for dyspnea, productive cough and fever. Her medical history was significant for arterial hypertension, COPD and diabetes mellitus. Her vital signs were: blood pressure 80/40 mmHg, heart rate 90 beats/min., respiratory rate 34 breaths/min., temperature 36°C and SpO2 74% on room air.
On physical examination she had an abolition of breath sounds on auscultation at the left base with widespread catarrhal rales. Laboratory tests demonstrated neutrophilic leukocytosis and increased inflammation markers. An Arterial Blood Gas (ABG) analysis showed ARF and respiratory acidosis (Tab.1 a), after aerosol therapy and corticosteroid intravenous, COT was started (Tab.1 b).
Chest radiography displayed an opacification of the middle-basal fields of the left lung. As a consequence of the persistent respiratory acidosis, Non-invasive Positive Pressure Ventilation (NPPV) was started. Empirical Antibiotic Therapy (ABT) with Ceftriaxone and Clarithromycin was administered and microbiological tests were done (Legionella urinary antigen and H1N1 test) resulting negative. In the following days NPPV was continued, despite poor patient compliance, and serial ABG showed a progressive improvement of hypoxemia with only a partial correction of  respiratory acidosis (Tab.1 c,d).  Furthermore a chest High Resolution Computed Tomography (HRCT) was performed and showed a partial obstruction of the main left bronchus with atelectasis of parenchyma, widespread bronchiectasis filled with mucoid material and parenchymal consolidations (Fig.1 a,b).
On day 5 the patient was admitted at the Emergency Medicine Ward where, after taking vision of the HRCT, oxygen therapy with HFNC was started (gas flow rate of 60 liters/min., mean FiO2 of 26%, CT 34°). Serial ABG were performed showing a progressive improvement of gas exchange, the achievement of an almost normal pH (Tab.1 e,f) and a normal respiratory rate (RR = 16).
After one week of HFNC a chest HRCT was repeated and displayed a significant reduction of bronchial obstruction, of atelectasis and of parenchymal consolidations, several bronchiectasis persisted without mucoid material inside (Fig.2 a,b). After a gradual reduction of flow, on day 10, HFNC was stopped and COT was started. On day 13 the patient was discharged without oxygen therapy (Tab.1 g).
Table 1. AGB of I Case
COT= conventional oxygen therapy,  NPPV = Non invasive Positive Pressure Ventilation, HFNC = High flow nasal cannula

a. Partial obstruction of the main left bronchus with atelectasis of parenchyma

Figure 2. The second chest HRCT of the 1stcase

a. Reduction of bronchial obstruction, atelectasis and consolidations

b. Reduction of consolidations; several bronchiectasis persisted without mucoid material

A 63 years old man was admitted to the ED for confusion, fever, dyspnea and diarrhea; family members also reported several vomiting episodes within few days. In his past medical history was reported gastric carcinoma treated with chemotherapy, arterial hypertension and ischemic heart disease. On physical examination he was pale, sweaty, and dehydrated; his blood pressure was 70/40 mmHg, heart rate 110 beats/min., respiratory rate 30 breaths/min., temperature 38°C and showed an overall reduction of breath sounds on auscultation with catarrhal rales. Laboratory tests displayed marked leukopenia (white blood cell count 0.8 x 103), thrombocytopenia and a rise of inflammation and sepsis markers (PCR 17 mg/dL, PCT 40 mg/mL). ABG analysis showed AhRF with metabolic acidosis (Tab.2 a). Chest radiography showed an extended lung consolidation in the middle pulmonary field on the right. Emergency physicians assumed sepsis related to aspiration pneumonia in immunosuppressed patient as diagnosis. They began COT with ventimask (FiO2 50%) and started a fluid load with normal saline and vasopressor infusion.
After collecting blood and urine cultures, they started empirical ABT with Vancomycin, Meropenem and Fluconazole. Further microbiological examinations have been performed (test for detection of toxigenic Clostridium difficile and of Influenza Virus) and resulted negative.
On day 4 the respiratory symptoms worsened and ABG analysis showed respiratory acidosis (Tab.2 b) consequently NPPV was started with rapid improvement of gas exchange (Tab.2 c).
In the following days patient stayed  in the emergency room where he continued NPPV, serial ABG analysis (Tab.2 c,d) and continuous monitoring of vitals.

On day 6 a chest HRCT was taken, and showed hypodense material in trachea and in the right main bronchus with consensus atelectasis of the pulmonary parenchyma of the middle and the inferior lobe of the right lung; extended lung consolidations of the middle and superior lobe of the right lung were also highlighted (Fig.3 a b).
In the same day the patient was admitted to the Emergency Medicine Ward where an attempt to wean from NNPV with COT was undertaken, but gas exchange worsened with COT (Tab.2 e), and oxygen therapy with HFNC was started (gas flow rate 55 liters/min., mean FiO2 52%, CT 31°). Thanks to HFNC there was a progressive improvement of gas exchange (Tab.2 f,g) and on day 17 a new HRCT showed a clear resolution of the bronchial obstruction and of the parenchymal atelectasis, several bronchiectasis were also highlighted (Fig. 2b).
After a progressive flow reduction of HFNC, on day 21, the patient was discharged without oxygen-therapy. 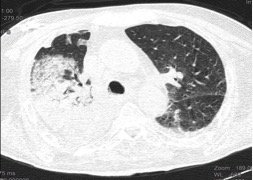 a. Hypodensity in trachea with atelectasis, plus lung consolidations of the superior right lobe 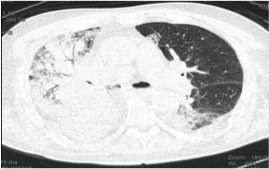 b. Hypodensity in the right main bronchus with consensus atelectasis and consolidations of the middle lobe 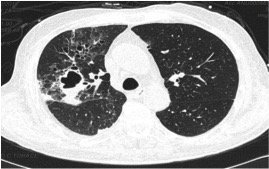 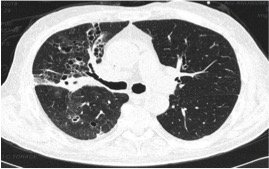 b. Resolution of the trachea and bronchial obstruction and of atelectasis and consolidations

In this work we reported two cases of acute bronchial obstruction with atelectasis in patients with chronic bronchiectasis successfully resolved by HFNC. Bronchiectasis is a chronic obstructive lung disease characterized by pathological dilatation of the bronchi. Neutrophilic airway inflammation, mucus hypersecretion-retention and dysfunction of the muco-ciliary system 15play a crucial role. Congenital airway defects, gastric aspiration, previous severe lower respiratory tract infections and immune deficiencyare well-known risk factors 18.
More over bronchiectasis are often associated with COPD, so this is important to investigate the patients affected18.
Although at the best of our knowledge there is a little evidence supporting use of HFNC in Bronchiectasis-COPD patients. Some studies have demonstrated that the chronic use of HFNC could reduce the frequency of pulmonary exacerbations and could improve the quality life scores and lung function in patients suffering from bronchiectasis 13,14.Furthermore several works have highlighted the efficacy of HFNC in treatment of hypercapnic ARF in COPD patients.  15,16,17.
In the first case we have talked about a COPD patient with bronchiectasis treated with NPPV in ED, but with poor tolerance to the method. In the second case we have described an immunosuppressed patient with bronchiectasis, suffered from several lower respiratory infections in the past years and frequent gastric aspiration episodes.
In both cases we have reported that the thoracic surgeons gave no indication to perform a bronchoscopy, and counseling to continue medical therapy.
The described patients both suffered from bronchiectasis so they had an important impairment of muco-ciliary system. Therefore we can assume that the main effect of high humidified and warm flow was the improvement of the muco-ciliary transport 2and consequently the increase of the mobilization and elimination of airway secretions. Furthermore, we can assume that HFNC could have produced a carbon dioxide (CO2) reduction and a normalization of the pH value, not achieved by NPPV, thanks to the increase of anatomical dead space clearance and to the reduction of the CO2 rebreathing with a result improvement of alveolar ventilation.
We can also speculate that HFNC “PEEP effect” could have reduced parenchymal atelectasis and determined an oxygen improvement due to increased alveolar recruitment2.
More over in both cases, patients showed a good tolerance of HFNC allowing to obtain a continuous oxygen therapy.
In conclusion we can assert that HFNC, together to ABT and inhaled corticosteroid and Beta-2-agonists, could be an effective treatment to improve gas exchange in bronchiectasis exacerbations and an alternative therapy to treat hypercapnic ARF in selected bronchiectasis-COPD patients who exhibit poor tolerance to NPPV.