Background
Leiomyoma is a benign tumor of the smooth muscle cells. Typically, primitive lesion originates from the uterus; extrauterine location is a rare occurrence and the most common extension sites are pelvic/broad ligament vessels, less often the inferior vena cava, the right heart and the right pulmonary artery. Intravenous Leiomyomatosis (IVL) is a rare and unusual clinical condition with intracaval and intracardiac extension. The initial presentation is related to the severity of cardiac involvement. The patient may remain asymptomatic until the onset of heart failure, pulmonary embolism and sudden death.

A case of a 47-year-old woman in premenopausal age, who presented with a history of dyspnea, asthenia and lower extremity edema. The patient had already undergone two surgery for uterine leiomyoma recurrence (the latest in April 2016). The diagnostic examinations (echocardiography, computed tomography and magnetic resonance) have allowed the correct diagnosis. Before surgical management, the patient was subjected to embolization of the uterine arteries of the remaining uterus after the last resection of the relapse (april 2016). The subsequent surgery in two “step” has allowed complete removal of tumor. Complete removal is associated with an excellent prognosis.

Surgery remains the gold standard treatment and a complete removal is really curative.

Leiomyoma is a histologically benign tumor of the smooth muscle cells. The intravenous leiomyomatosis is an unusual clinical condition, characterized by intravascular proliferation through the lumen of the iliac veins to the inferior vena cava (VCI) with extension to the right hearth. This clinical condition is called IVL (1,2,3). In 1959, for the first time, IVL was described in English literature from Marshall e Morris and, since than until 2012, they have been reported 194 cases (4). In 1984, the first surgery has been described by Darks (5,6,7,8,9). The higher incidence is in women between 40 and 50 years, in pre-menopausal age; most patients (approximately 83,5%) had undergone a previous hysterectomy/myomectomy (3). Only a few patients have normal uterus and this supports possible origin of the smooth muscle cells of the tunica media of the vessel wall.
The non-specific symptomatology is correlated with the severity of cardiac involvement. The IVL can be related to the obstructive effect on the tricuspid orifice and disturbance of venous return into the right atrium, which could include pulmonary dyspnea, syncopal episodes, pulmonary embolism and sudden death. Differential diagnosis include atrial mixoma, inferior vena cava thrombosis, abdominal tumors such as hepatocellular carcinoma, renal cell carcinoma, Wilms tumor (typical of children), adrenal tumor, leiomyosarcoma of the uterus and metastatic tumors (10,11).
Atrial mixoma originates from the interatrial septum and extended to the left ventricular cavities; in preoperative step, kidney cancer can distinguished with imaging that can highlights kidney lesion, but in postoperative step, kidney cancer can diagnosed with histological examination. “Imaging” has allowed a correct preoperative diagnosis. Trans-thoracic echocardiography (TTE) can give a “real-time” information on the intra-cardiac lesion, its size and mobility. Trans- esophageal echocardiography (TEE) revealed in a more detailed way a hyperechoic and mobile mass that filled until 2/3 of the right atrium and protruded across the tricuspid valve (12,13). The contrast- enhanced CT and MRI are used to define sites, localization, origin and extent and to give accurate anatomical information (14,15).
Surgery can be performed in one or two stages: resection of intrathoracic and abdominal/pelvic tumor in two separate operations or involving total resection of the tumor (16,17,18,19). It is decided on the basis of the clinical condition of the patient and of the surgical agreements that may change during surgery for the appearance of complications. Surgery with complete excision of the tumor is strongly recommended for a favorable outcome; no recurrent disease has been reported in 15 years follow-up.
Histologic evaluation of IVL is characterized by uniformity with fasciculations or plexiform appearance or occasionally storiform without atypia or increased mitotic index (5). Immunohistochemical analysis using monoclonal antibodies revealed positivity for smooth muscle markers desmin and smooth muscle actin (SMA) and optionally receptors for estrogen and/or progesterone. The proliferative index Ki-67 is minimal (<1%). Treatment with antiestrogens or aromatase inhibitors is very controversial, and it was considered only for patients with partial resection of disease.

In september 2014, a 47 years-old woman, nulliparous, in premenopausal, was submitted to myomectomy. In april 2016, for local recurrence, in the Department of Gynaecology, she has been subjected to subtotal hysterectomy with preservation of annexes. Histological examination confirmed leiomyomatosis with endovascular thrombi and ischemic necrosis. In December 2016, the patient was hospitalized for shortness of breath, bilateral legs edema and simultaneously increase volume of abdomen.
Abdominal CT documented “polilobata”, inhomogeneous and vascularized pelvic tumor mass, that compressed the surrounding structures, like the bladder, without any cleavage plane, and that determined bilateral hydroureteronephrosis, predominantly to the left; furthermore, CT showed a long, serpentine and elongated mass extending from internal left iliac vein continuing to the inferior vena cava and extending into the right atrium (Fig. 1). This long mass obliterate, almost completely, the lumen of the intrahepatic cava and right atrium and partially the lumen of left renal vein and right iliac veins.
Initially, origin of this mass was unknown; likely referring to thrombus extending from iliac veins to right atrium. The surgical remove of the pelvic mass was subordinated to the resolution of the “thrombotic” issue. Meantime, in the light of bilateral “idroureteronefrosi”, a double bilateral JJ urethral stent was placed; at the same time, sodium heparin therapy was started and changed to low molecular weight heparin for approximately 45 days, without any clinical benefit.
The integration of other diagnostic tests allowed a correct diagnosis. TTE (Fig. 2) showed voluminous oval mass approximately of 28×42 mm, that filled the right atrium and that was a part of a elongated, hypoecogenic and inhomogeneous mass (20-25 mm in diameter). This elongated mass filled the lumen of the VCI, and its thrombotic nature are not likely, in the light of the poor response to anticoagulant therapy, but was compatible with intravascular leiomyomatosis. Chest CT confirmed the presence of solid tissue, with the same densitometric characteristics of the pelvic mass, that filled and dilated completely the left internal iliac vein and the VCI and extended to the right atrium (diameter of 5×3,5 cm).
First of all, the patient was undergo embolization of uterine arteries. At a later time surgery has been planned in two steps. In the first part (Fig. 3), after sternotomy in extracorporal circulation and hypothermia (26°C), the cardiac surgeon has removed, opening the right atrium, the coarse neoformation with smooth marigins that projected into the right atrium. It was necessary a longitudinal venotomy of the inferior vena cava in its thoracic part (Fig. 4). During the same operation, through midline laparotomy, the general surgeon performed an initial cavotomy to extract the segment of thoraco-abdominal neoformation and, after the clamping of the left common iliac vein, he removed the infrarenal segment of the neoformation strongly adherent to the IVC wall. It was possible to visualize the pelvic mass that attracted the bladder and the sigmoid, twisted on itself, and to observe new local venous hypertension vessels.
Following the prolonged hypothermia, time for extracorporeal circulation, and considering the numerous pelvic collateral circles, it has been decided to postpone the second part of the surgery by removing the pelvic mass and the IVL in the left internal iliac vein. After seven days, the patient has been subjected to laparotomy to remove “en Bloc” the tumor and both ovaries and appendages. The uterus neck, that appeared dislocated to right and the residual IVL in the left internal iliac vein has been removed.
This neoformation incorporated the intrapelvic tract of the left ureter; this tract has been removed and the upstream and downstream moncons was sutured, leaving the “double JJ” urethral stents previously positioned. In this way, strongly related to the bladder, the pelvic mass has been completely removed.
The hypogastric artery and the vein have been linked and sectioned to perform a complete and radical removal of the IVL. The extemporaneous histologic examination showed bundles of isolated spindle cells and necrosis areas. The final hystologic examination is compatible with leiomyomatosis intravascular that originate from uterus and confirmed fusiform cells with elongated nuclei to smooth cells origin. On the immunohistochemical study, the tumor cells were positive for actin, desmin, CD34, with mild nuclear atypia and absence of mitosis; there was no positivity with the antibodies for S-100 protein, CD 117 and CD10. This panel showed many vessels, some of this containing thrombi, and associated with ischemic necrosis; the proliferative index (percentage of positive tumor cells to Ki-67) was 7%. 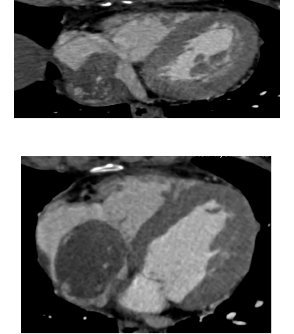 Figure 1. Thoracic CT scan. It should be noted the characteristic fusiform appearance of the tumor that grows in the vena cava until complete protrusion into the right atrium. 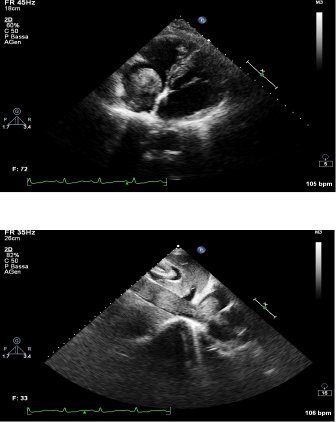 Figure 2. Transthoracic echocardiography. The pictures show an elongated mass extending from vena cava (second picture) through the right atrium and crossing the tricuspid valve into the right ventricle (first picture). 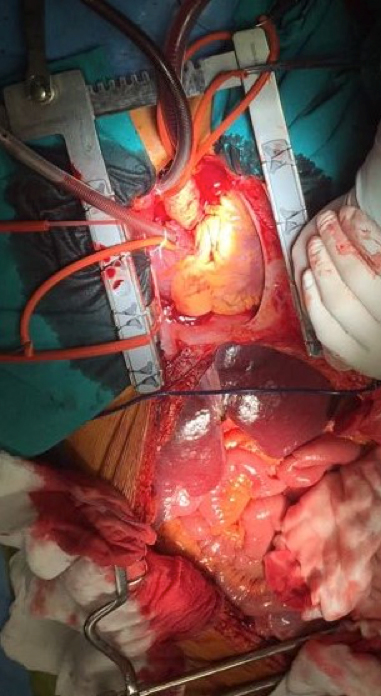 Figure 4. Operative part of intrathoracic IVL. It is possible to see the appearance smooth characteristic of the endovascular mass with the apical segment arrived in the right atrium, prepared for anatomical study (as indicated by arrow).

The IVL is a rarely encountered smooth muscle cell tumor that originated from the uterus and grows within venous channels but does not invade the tissues. Occasionally, the tumor occurs in other intravascular locations, distant from the uterus. Intracardiac leiomyomatosis is insidious; the patient can develop heart failure, pulmonary embolism and sudden death. The diagnostic tests, trans-thoracic and/or trans-esophageal echocardiography, computerized tomography and/or MRI allows an accurate diagnosis on origin, on intravascular extension and localization.
The gold standard treatment is a surgical complete removal, with hysterectomy and resection of all extra-uterine masses, mandatory for a favorable outcome and to avoid recurrence. Surgery can be performed in one or two stages, with resection of the intrathoracic tumor–intravascular and intacardiac tumor in hypothermia, cardiac arrest and extracorporeal circulation, to reduce the risk of death from obstacle to cardiac inflow, from obstruction of the tricuspid valve or from pulmonary embolism- and of the abdominal/pelvic tumor in two separate operations. Hence, surgery is really curative.
The tumor recurrences are uncommon and occur particularly when complete removal has not been possible for several reasons. Bilateral oophorectomy and removal uterus broad ligament (possible additional site of leiomyomatosis) are also considered essential, because this tumor is estrogen-dependent. The affinity for the intravascular growth could be associated with the histological positivity for estrogen and progesterone receptors. In cases of unresectable residual tumor, anti-estrogens therapy, such as tamoxifen, has been considered but efficacy is still controversial.
Long-term prognosis and survival of IVL is usually very good if the disease can be completely removed. Recurrence are unusual but can be found up to 15 years after surgery. Long-term follow-up is recommended, including thorax and abdomen CT scan and serial echocardiography.