Severe Hyponatremia in the elderly: the seasonalvariability in the emergency department

In this cross-sectional analysis, we included all patients presenting to the Department of Emergency Medicine of Marcianise University Hospital, in Caserta, Italy, between January 1st, 2016 and December 31st, 2016. Measurements of serum sodium were carried out according to the prescription of the emergency physician in charge. Exclusion criteria were age <18 years and in order to avoid specific hyponatremia states due to surgical procedures, patients with surgical and gynaecological diseases were excluded from the study. The study population consisted of 7025 patients. It was subdivided into two groups: the adult group (A), consisting of 4520 patients aged between 18 and 64 years and the elderly group (E), consisting of 2505 patients ≥ 65 year-old. Demographic data were obtained from all patients, and final diagnosis was derived from the International Classification of Diseases, 10th revision (ICD-10). We used the meteorological parameters recorded from Naples Meteorological Station of Capodichino, Naples, Italy (6), which is located 23 km away from our Hospital. In accordance with the Italian National Center of Meteorology and Climatology, we defined the seasons as follows: spring: March 1st until May 31st; summer: June 1st-August 31st; fall: September 1st-November 30th; winter: December 1st-February 28th. Daily minimum, maximum and average temperatures, barometric pressure, relative humidity, daylight hours, monthly and annual average temperatures were recorded during the study period. Of all admitted patients the following data were included in the database: age, gender, laboratory data, and length of hospital stay and in-hospital mortality. The blood sample drawn from each patient was divided into several BD Vacutainer Blood Collection tubes (Becton, Dickinson and Company, Franklin Lakes, NJ) for immediate analysis. Biochemical data were determined using a Vitros Fusion 5,1 FS Automated Chemistry Analyzer (Ortho Clinical Diagnostics, Johnson & Johnson Co, New Brunswick, NJ). Serum laboratory parameters tested in the Emergency room were as follows: creatinine, glucose, aspartate aminotransferase, alanine aminotransferase, creatine kinase (CK), CK-MB, troponin T, potassium, sodium, calcium, magnesium, chloride, lactate, and ammonia. Blood cell counts were determined using a COULTER LH 750 Hematology Analyzer (Beckman Coulter Co, Brea, CA). The blood gas samples in Luer Slip syringes containing heparin were analyzed to obtain pH values. The blood gas analyses were determined using a Gem Premier 4000 Analyzer (Instrumentation Laboratory Company Inc. Bedford MA, USA). Using these data, we calculated the prevalence rates of hyponatremia defined according to the reference range of our laboratory. Severe hyponatremia was defined as serum sodium level below 120 mmol/l. In addition, we gathered laboratory data on serum electrolytes, creatinine and venous blood gas analyses of all patients presenting with electrolyte imbalance. The experimental protocol was reviewed and approved by the Ethics Committee of the Second University of Naples. All participants obtained voluntary written consent. The study was carried out according to the Declaration of Helsinki.

Data analyses were performed using SPSS, Version 19.0 (IBM Corp, Armonk, NY). Statistical significance was set at p<0.05 for all procedures. Analyses of variance or t-tests, as well as statistical differences for trend were used to compare means for continuously measured variables. Chi-square tests for independence were used to test statistical differences for categorical variables. Data are presented as percentage and mean ± standard error (SE). 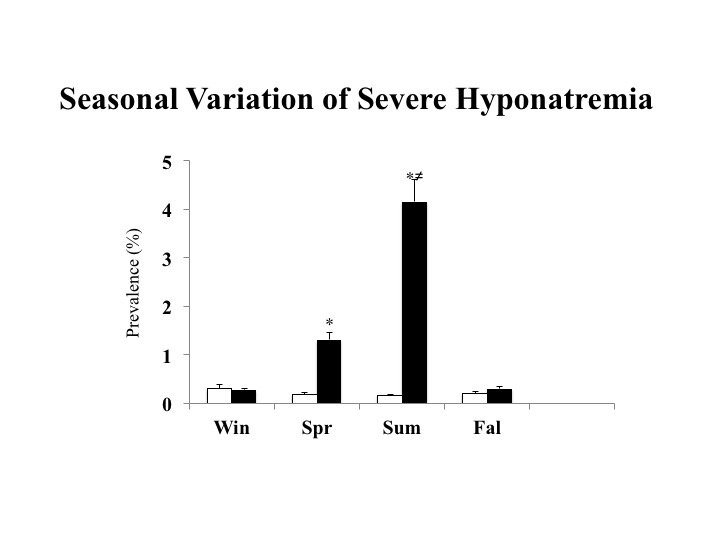 In the present study, we reported an increased prevalence of severe hyponatremia in elderly patients admitted to the Department of Emergency Medicine.
Previously, it has been reported the effect of heat periods on the prevalence of hyponatremia in outpatients presenting to the ED (7). We do not know the exact reasons for such findings. Several mechanisms that can explain these changes, for example, the decline of renal function with aging (8) could be an important contributing factor. In fact, has been reported that renal failure was the only variable independently associated with hyponatremia (9). Of interest, it has been observed that both, water intake and losses were approximately 40% higher in the summer than in the winter (10) and a decreased dietary salt intake occurred during the summer (11-13). In addition, we observed a significantly reduction of renal function in the elderly group (Table I). This data, together with a reduced intake of sodium and together with an increased sweating and water intake, could seriously expose elderly subjects to a greater net sodium loss that may have caused the severe hyponatremic state. In fact we observed a significant correlation between weather temperature and prevalence of hyponatremia in the elderly group.
In conclusion, we observed a major influence of weather temperature on the prevalence of severe hyponatremia in elderly patients. These results could be useful for emergency physicians trying to understand and prevent hot weather-induced severe hyponatremia in the elderly.