Hypoglycaemia in patients with Alcohol-Related Disorders (ADR): unexplored features from the experience of an Emergency Department 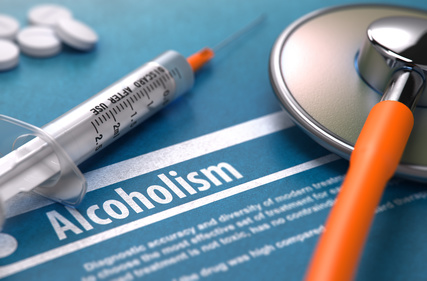 A retrospective study on the accesses in the Emergency Department of a large teaching hospital in Rome was conducted to ascertain patients presenting with hypoglycaemia. The observation period was from January 2012 to December 2013 (24 months). A total of 441 patients had hypoglycaemia (plasma glucose <70 mg/dl) in their first laboratory measurement. 51 of them were had a diagnosis of Alcohol Related Disorders and formed the study group.

Anthropometric data, blood chemistry, treatment in A&E and the outcome of the ARD patients were compared with the data of the other 390 patients with hypoglycaemia not related to alcoholism. The ARD group was composed of almost all men (42/51), with a mean age lower than the other group (45.24±13 vs. 57.08 ±22.8, p<0.001). All ARD subjects had normal renal function, lower prevalence of diabetes mellitus, but had signs of liver damage from alcohol. We also conducted a systematic review of the literature, which showed specific clinical characteristics of the patients with ADR, such as younger age, male sex, and milder hypoglycaemia.

Our study adds new knowledge on unexplored and unknown aspects of alcohol-related hypoglycaemia, defining a patient phenotype in which alcohol-related disorders should be sought with a targeted medical history, in order to activate a specific diagnostic and therapeutic pathwa

Hypoglycaemia is a very common condition responsible for a high number of accesses to the Accident & Emergency (A&E) Department, particularly in patients with diabetes mellitus (DM). So far, the attention of researchers has been mainly focused on hypoglycaemia in diabetic patients, and only marginally on hypoglycaemia in non-diabetic patient. A recent study 1 has shown that out of 3753 admissions for hypoglycaemia in 46 Italian Emergency Departments in 18 months, 3516 (93.6%) of these admissions were performed in patients with diabetes in treatment with insulin (49.8%), oral anti-hyperglycaemic agents (31.4%), or combination treatment (15.1%). Another Italian study 2 reported, in a single hospital, more than 500 cases of hypoglycaemia in a 5 years follow-up.

Studies in other series of patients from A&E Departments have all shown comparable results on hypoglycaemias in diabetic patients 3 4 5. A very recent study showed that within 1835 episodes of severe hypoglycaemia, 45% occurred in type 1 diabetes patients and 44% in type 2 diabetes patients, with only a few in “unclassified” subjects 6. A study on the German population 3 showed that there was also a considerably higher incidence of severe hypoglycaemia within a 10-year period, probably due to intensification of diabetes treatment.

Amongst the causes of hypoglycaemia not related to diabetes there is alcoholism. It is common knowledge that alcohol intoxication, either acute or chronic, can lead to hypoglycaemia, determining a very severe medical condition, particularly when it is complicated by metabolic acidosis due to increased lactic acid. Hyperlactatemia can be determined by excessive alcohol intake, which induces an unbalance in the NAD+/NADH ratio, with an excess of hydrogen ions into the cells. The resulting acidosis blocks the conversion of pyruvate in glucose and determines the formation of lactate. If malnutrition is present (as it is often the case in alcoholics), the reduced gluconeogenesis favours the occurrence of severe hypoglycaemia 7 8 9. At present, the real prevalence of alcohol-related hypoglycaemia and the true extent of the problem are not known. Thus, we aimed to study alcohol-related hypoglycaemia in a cohort of patients that were admitted to the Emergency Department with both hypoglycaemia and alcohol-related disorders (ARD), comparing their demographic, clinical and biochemical feature with those of a second group of patients admitted with hypoglycaemia without evidence of ARD.

A retrospective study evaluating all the admissions for hypoglycaemia in the Emergency Department of the Policlinico Umberto I Hospital of the Sapienza University of Rome was conducted from the 1st of January 2012 to the 31st of December 2013 (24 months). All patients that at the time of admission had plasma glucose levels lower than 70 mg/dl (3.9 mmol/L) as defined by the American Diabetes Association 10 were recorded. Out of a total of 200.000 accesses to the A&E department, 441 adult patients presented with hypoglycaemia and were selected for the study.

From the cohort of 441 subjects with hypoglycaemia at entry, we selected 51 cases (11.56%) with a history of chronic alcoholism and/or acute intoxication from alcohol, which were compared to the other 390 subjects with non-alcohol related hypoglycaemia as controls. All the data were extracted from the computerized register of the Emergency Department. In this system, each admission is registered by the GIPSE Computer System (a software tool supporting the activities of the Accident and Emergency Departments that collects data that make up the information flows required by the Lazio Region), in which the patient’s info, the cause for their admission, the relative priority code are imputed. Moreover, the system follows the route of the admitted patient until any of the possible outcomes: discharge from the A&E, admission as inpatient, transfer to another hospital or death. At the end it delivers of valid documentation for the purposes of law.

The two cohorts (patients with ARD and hypoglycaemia, and patients with non-alcohol related hypoglycaemia) were compared by ANOVA or chi-square tests, as appropriate. All analyses were performed using the SPSS version 21 statistical package (IBM SPSS Statistics, Chicago, IL).

Out of 441 cases of hypoglycaemia (plasma glucose <70 mg/dl) that were recorded in the period form January 2012 to December 2013, 51 presented a history of Alcohol-Related Disorders (i.e. a cluster of cognitive behavioural and physiological symptoms indicating that the individual uses and continues using the substance despite significant substance-related problems 11. The other 390 (88.4%) subjects had hypoglycaemia at entry that was not related to alcohol and were selected as controls.

The clinical and biochemical characteristics of the two cohorts are presented in table 1. 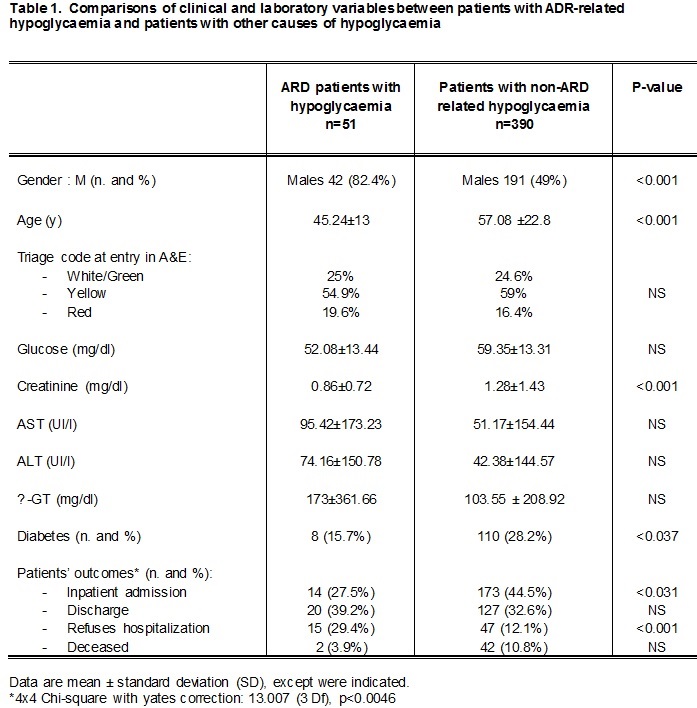 With regards to the patients with ARD, they were referred to the Emergency for changes in the level of consciousness, or abdominal pain, or signs and symptoms of liver disease, or seizures, and/or abuse of psychotropic substances. A small subgroup (6%) arrived at the A&E because of trauma. 16 out of the 51 ARD patients had  changes in their level of consciousness,  with a Glasgow Coma Scale (GCS) <15.

Comparing the patients’ outcomes between ARD patients and controls, we observed a significant overall differences (p<0.002) between the two groups (2×4 analysis). Then, to better understand the nature of the evidence, a 2×2 chi square was performed. Statistically significant differences was found between inpatient admission and in patients decline hospitalization. In particular, 27.5% of the AED patients were admitted to hospital compared to 44.5% in the control group (p0.031) and 29,4% of the ARD patients rejected hospitalization vs 12.1% in controls (p<0.001). With respect to the death 2 (3.9%) of the ARD patients deceased in the Emergency Room during hospitalization vs 42 (10.8%) of the controls. The 2 deceased patients in the ARD group were both affected by liver cirrhosis. No statistically differences were found in deceased patients and in discharge between the two group.

In 31 of the ARD patents in which clinical signs of acute intoxication were present the blood alcohol levels were 1.65 g/L , although only 4 (7.6%) of the ARD patients presented major disturbances of consciousness, with a Glasgow Coma Scale <8.

Systematic review of the literature

We compared the data obtained in our population of patients with alcohol–related disorders and hypoglycaemia to the results reported in other populations recruited on the basis of hypoglycaemia in A&E. As shown in table 2, most studies were performed in cohorts of subjects with diabetes, with only a few focusing on or comprising non-diabetic populations. Only two studies reported data on ARD patients 12 13, and these subgroups showed similar characteristics to our ARD patients: they had a higher percentage of men, lower mean age and similar blood glucose at entry.

Overall, in all studies, patients with hypoglycaemia without ARD (table 3) had older age, lower plasma glucose, higher creatinine levels or higher prevalence of CKD, and higher mortality, suggesting that these populations (with and without ARD) should be managed differently 1 3 6 12 13 14 15. 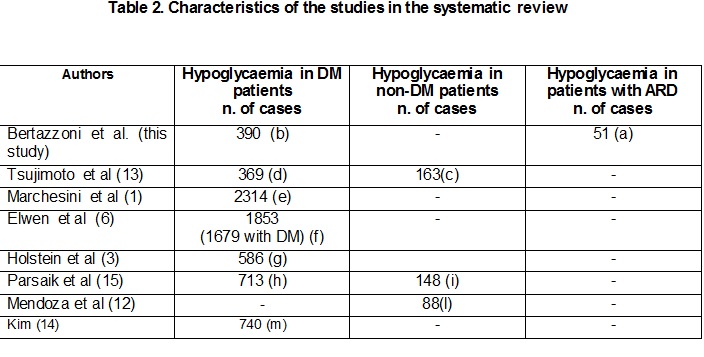 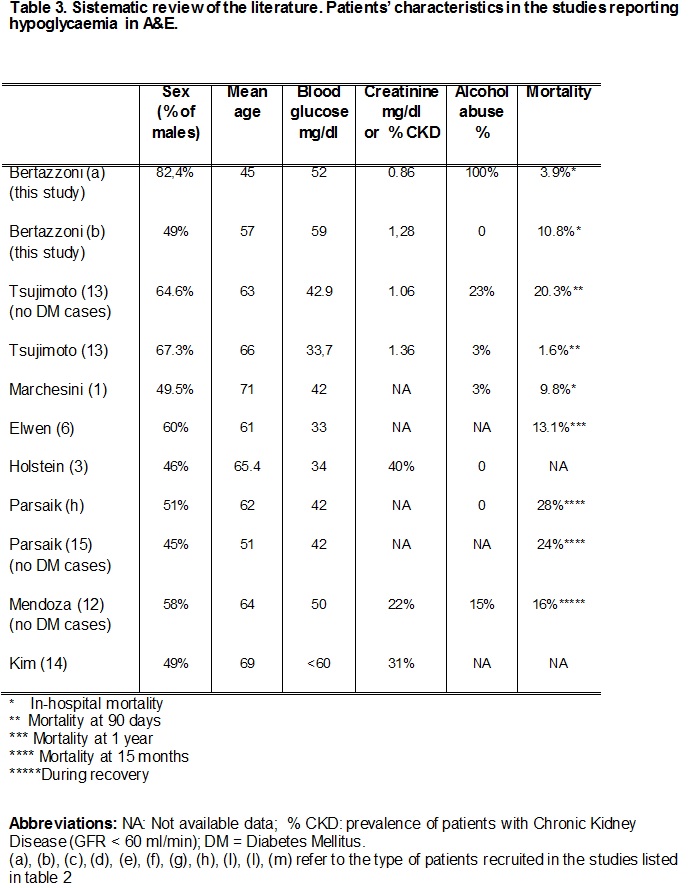 In our study we have investigated the clinical and biochemical characteristics of a cohort of patients with hypoglycaemia in A&E, all affected by alcohol-related disorders. Overall, in a follow-up period of 24 months, out of a population of 441 subjects presenting with hypoglycaemia (≤ 70 mg/dl) at the Emergency Department, we found that 11.7% of them were affected by ARD, either chronic abuse or acute intoxication of alcohol. They were prevalently males (82.4%) with a relatively young age (45.24 years). This difference in gender and age probably reflects the higher use and/or abuse of alcohol in younger males than the rest of the population.

Ours is one of the largest studies on ARD patients with hypoglycaemia, and we observed that these subjects are younger, mostly males, with milder hypoglycaemia and lower mortality. These results were also confirmed in our systematic review of the literature.

Furthermore, we found that an altered liver function has more prevalent in the ADR group, as a clear proof of the mitochondrial damage due to liver toxicity of alcohol 7. We also observed differences, although not statistically significant, in the number of subjects with ischaemic cardiovascular disease, hypertension and BPCO, all more frequent in patients without ARD (data not shown).

The higher mortality in diabetic or non- ARD cohorts may reflect the higher prevalence of comorbidities in these populations, composed also by older subjects, that may determine worst outcomes.

The identification of patients with ARD who come to the A&E is of great importance for their management, particularly when in these patients there is indication to administer glucose for rehydration and for nutritional problems, or, as in our case, for hypoglycaemia. The administration of glucose, in fact, may cause a thiamine consumption that determines a further deficiency of thiamine, and that can be responsible for both the onset of delirium tremens and for the exacerbation of an iatrogenic Wernicke’s encephalopathy 18 19 20.