Use of fluids to treat patients with acute alcohol intoxication: are they really effective? 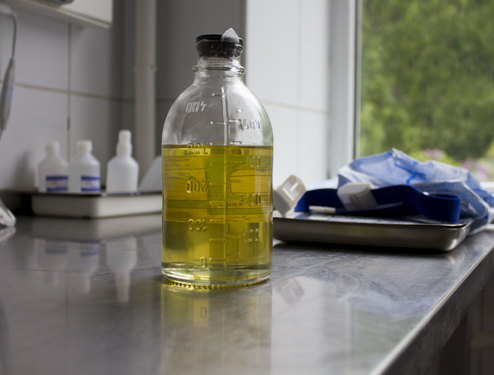 It is common practice to use saline solution (0.9% sodium chloride) to treat patients with acute alcohol poisoning1 despite the lack of scientific evidence for its efficacy2,3.
Fructose infusion can also be used to enhance alcohol metabolism, however its administration can further increase plasma osmolality (already elevated because of ethanol ingestion) and possibly cause lactic acidosis4. This is the reason why this treatment is not recommended and saline infusion is more frequently used1,2.
In this regard it is worth mentioning a study conducted in one of the Emergency Departments in Queensland (Australia). It compares uncomplicated alcohol-intoxicated patients treated with saline solution (0.9% sodium chloride) plus observation, with a control group presenting the same characteristics but only treated with observation5. The main outcome of this research is the evaluation of the effectiveness of fluid therapy in reducing patients’ intoxication levels and length of stay in the ED (therefore costs).
It is indeed common medical practice to use fluids with the aim of lowering alcohol levels and its metabolites, reducing its neuro-depressive effects, and making patents spending less time in the ED. However, it is desirable to explore their use to ensure that the health benefits outweigh potential harms, such as infection and fluid overload.
In the aforementioned study there were first identified 626 patients presenting with acute alcohol poisoning as their primary diagnosis. Of these 626 were only included those patients aged 18 to 50 not presenting any psychiatric or neurological preconditions or requiring airway support. 144 patients resulted eligible for the study; of these 144, 73 were treated with a single bolus of 20mL/kg normal saline infusion, and the other 71 constituted the observational group.
Results showed no significant difference between the two groups in terms of length of stay in the ED, and general state of intoxication. These findings are in discordance with the common medical perception that fluids administration makes patients sober faster enabling swifter discharge1,2. At 2 h, the only relevant change between the two groups was the faster decrease in breath alcohol level (BAL) in the treatment group, however this did not determine a faster discharge.
Finally, intra-hospital costs were higher for patients in the treatment group; these are to be attributed to the administered saline solutions and to the higher intensity of care required (Tab 1).

This very interesting and thought-provoking study has its own limitations:

Despite these limitations, the study suggests there is no evidence that fluids administration delivers a better outcome to the treated patients neither in terms of improvement in intoxication scores, nor in changes in alcohol clearance, nor in enabling earlier discharge3.

The question remains as to whether in some carefully selected patients the administration of saline solution (0.9%) would obviate the volume depletion caused by ethanol-induced diuresis, poor fluid intake and vomit6,7. Hydration also helps preventing metabolic disorders such as acidosis or alkalosis, hpo or hypernatremia, hypokalaemia from occurring8,9,10.

In managing these clinical situations, the real issue – very well known in the literature – becomes the ability to identify and differentiate patients who have needs for medical care from those that only require observation9,10. Similarly we could select those who need a blood alcohol test or a head CT.

There are no easy answers; we know that a discrepancy between level of consciousness and blood alcohol concentration or delayed awakening are commonly used criteria, but it is not so simple to establish general rules of behaviour. Surely the most feared metabolic disorder is metabolic acidosis, which, if downplayed, could be fatal11,12,13.

To sum up, there seems to be no scientific evidence that fluid therapy should be used in all cases of acute alcohol intoxication, but it is advisable to reserve it to those patients with hydro-electrolytic alterations or only where deemed necessary.