Therapeutic dilemma in disseminated intravascular coagulation: primary myelofibrosis is not a single disease 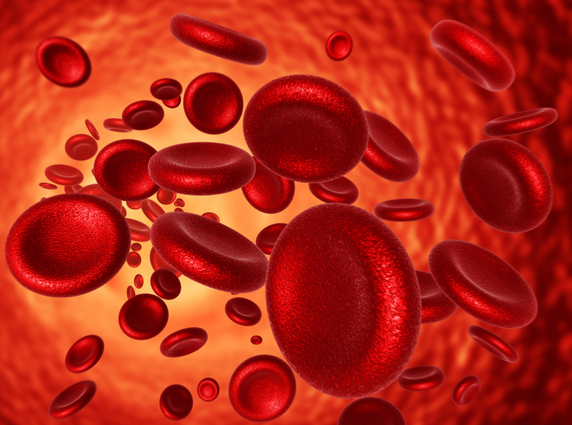 Disseminated intravascular coagulation (DlC) is often a hard to recognize haematological disorder, which is always difficult to treat, as it is the final manifestation of a number of different serious syndromes. lts prognosis depends on the severity of the coagulopathy and on the underlying condition.

ln this paper, we present and discuss the therapeutic strategies adopted in a 64-year-old patient who arrived at our emergency department for a DlC triggered by a primary myelofibrosis (PM) relapse. This fact, together with dehydration, aggravated the prognosis.

Why does an emergency physician need to know this?

Looking at what evidence-based medicine recommends the sole winning strategy is for the emergency physician to recognize the relapsing chronic myeloid disorder and ensure adequate tissue perfusion with fluid and achieve electrolyte equilibrium at the same time.
There is still today a lack of curative strategies to choose from both in cases of PM and DlC. Therefore, if on the one hand, emergency physicians should implement best clinical practice, on the other, clinical haematology, departments should establish preventive and therapeutic policies for thromboembolic complications relating to haematological malignancies since their evolution is not a sporadic threat in emergency departments.

ln this paper, we present the case of a 64 year old patient suffering from multimorbidity with a recent diagnosis of chronic myeloproliferative disorder (MPD) (i.e. Primary Myelofibrosis – PM), that left untreated evolved in a diffuse intravascular coagulation (DlC).

The patient arrived at our emergency department (ED) for an acute abdominal pain with caudal extension reaching both lower limbs, associated with dysentery occurred during the two previous days with a progressive worsening trend.
He was hospitalized in the cardiac rehabilitation centre where he was admitted two weeks before to recover from heart failure exacerbation. During hospitalization, he was treated with high doses of diuretics and water restriction to reduce preload and improve heart performance.
The patient had a history of diabetes mellitus not requiring insulin, chronic obstructive pulmonary disease on long-term low flow oxygen, and a recent laboratory diagnosis of active PM (reported leukocytosis > 30,000 / uL with a gene activating mutation of the thrombopoietin receptor MPL gene) yet untreated (no palliation or cytoreduction).
He had first of all gone to his local rural ED where he underwent an abdominal computerized tomography (CT) scan with contrast enhancement, which revealed extensive thrombosis spreading to the superior mesenteric artery, and to both renal and common iliac arteries. Owing to the severe extensive state of the thrombosis, he was transferred to our central ED with a request for a vascular surgical and haematological consultation.
At first glance, his clinical appearance was poor. The patient arrived in a diaphoretic, hypotensive, and oliguric (e.g. diuresis of less than 20ml/hour) state. Limbs were cold, hypotrophic, and pale with a long nail bed capillary refill time and weak peripheral pulses.
Despite marked abdominal pain, his abdomen was tractable with valid peristalsis. Thoracic evaluation revealed predominant respiratory crackles accompanied by dyspnoea and a mild decrease in SpO2 (93% SpO2 when breathing air). Blood gas analysis showed mild hypoxaemia (58 mmHg pO2; 0.21 FiO2) with a severe, mixed pCO2 (48 mmHg; pH 7.28; HCO3- 12 mEq/L).
Laboratory tests revealed leukocytosis (73,780 cells/uL), volume depletion with haemoconcentration (59.2% haematocrit, 6,860,000 erythrocyte cells/uL, Hb 18.4 g/dL), a tendency towards thrombocytosis (platelet count = 464,000 cells/uL), acute renal damage (2.48 mg creatinine/dl), no significant biliary or hepatocellular alteration (normal transaminases, alkaline phosphatase and gamma-glutamyl transferase values), and high serum osmolality (313mOsm/kg). (Table 1)
The ultrasound scan showed complete collapse of the inferior vena cava. He was admitted with a diagnosis of acute abdominal pain, severe dehydration, and acute kidney injury.
Strict clinical monitoring (vital signs and urine output) was implemented with telemetry equipment, along with the best possible supportive therapy while awaiting general stabilization. Pain was relieved using opiates (i.e. intravenous morphine). The marked hypotensive state, favoured by the ongoing dysentery, contributory cause towards the relapse in the haematological disorder, was countered by increasing fluids. Suitable hydration was implemented with saline infusion with the aim not only of ensuring adequate blood circulation (together with bicarbonate infusion and oxygen supplementation) but also of decreasing blood viscosity. The patient’s general thrombotic state prevented any surgical approach. Unfractionated heparin (UFH) was therefore administered to maintain haemodynamic stability and delay, without halting, the unrelenting threatening advancement of DlC triggered by aggressive MPD. Despite prompt therapeutic support, the overt establishment of DlC, secondary to the Hyperviscosity Syndrome (HVS) caused by MPD and dehydration, went beyond clinical reversibility and led to a multiple organ dysfunction syndrome (MODS), with secondary death from septic shock the next morning. 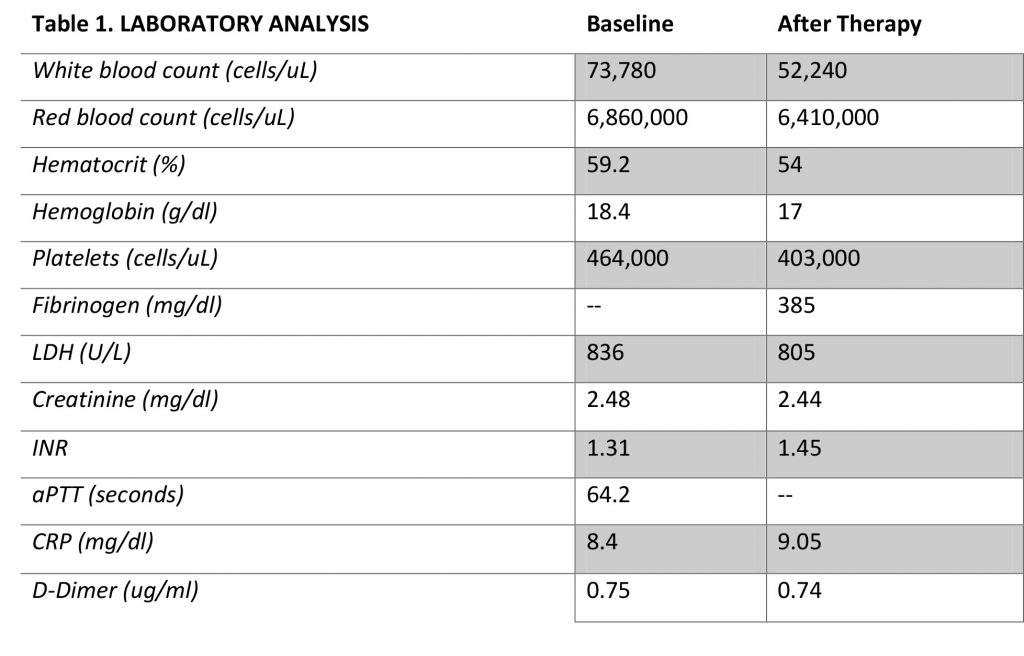 As far as blood tumours are concerned, the chronic MPD our subject had poses a true threat since their prevalence is underestimated. Acute leukaemic transformation occurs in 20% of patients with MPD within the first ten years, and may lead to HVS. (1) Diagnosis of MPD is often hard especially for ED physicians when attempting to differentiate between benign reactive thrombocytosis and essential thrombocytosis related to MPD. When assessing thrombocytosis in emergency, it is not critical to distinguish the specific myeloproliferative condition (whether it is PM, chronic myelogenous leukaemia [CML], polycythemia vera [PV], or essential thrombosis [ET]) since they all arise from overlapping genetic and clonal abnormalities that bring about persistent cytokine activation with increased cytokine production and myeloid cell responsiveness.(2) All emergency physicians should be aware of these situations considering the prognostic value of immediate therapeutic action on the underlying haematological condition. (3) Treatment decisions are based on the severity of signs, rather than on measurements of the degree of hyperviscosity (e.g. haematocrit or complete blood cell count), and consider two stages: suitable volume repletion and cytoreduction. Clearly, the more the treatments target the primary DlC cause, the more beneficial the results achieved will be, with a decrease in mortality.
Despite the relevance up to now of suitable identification (and treatment) of the causal aetiology associated with the onset of DlC, our attention should also focus on fluid and electrolyte equilibrium. Regardless of the timing, hydration is the first aim to achieve and is the most accessible and beneficial tool any physician has. Fluid misdistribution is undeniably the most frequently seen culprit among the several DlC triggering factors that occur in EDs and lntensive Care Units. More specifically, dehydration, which primarily entails loss of plasma rather than loss of whole blood, is a frequent cause of reversible hypovolaemia. lf hypovolaemia persists, it evolves into DlC.(4) lt must therefore be identified and treated appropriately, since water loss leads to haemoconcentration and consequent vasoconstriction. This causes the release of humoral and cellular inflammatory mediators, which activate coagulation with damaging effects on splanchnic organs.
ln our patient, the triggering factor that led to the development of HVS, secondary to MPD, was probably volume depletion. Together with the MPD relapse, this aggravated the natural course of the disease. Suitable fluid management, based on a correct understanding of the underlying pathophysiology of the fluid imbalance, should therefore be implemented to ensure adequate oxygen delivery, consumption, and circulating cellular and plasma volume. When promptly recognized, this prevents or delays the development of MODS secondary to DlC.

The case we have presented shows how chronic MPD, albeit rare, requires prompt diagnosis since the limited therapeutic options. This also calls for future Randomized controlled trials in order to identify new-targeted drugs. Undoubtedly, knowledge of our patient’s medical history of chronic MPD and identification of the poor prognostic factors present (e.g. leukocytosis) could have delayed the fatal outcome. However, the lack of decisive curative strategies to choose from both in PM and in DlC is an unavoidable issue. Once DlC sets in, therapeutic decisions are still challenging: the derangement of the fibrinolytic system contributes towards intravascular clot formation and causes severe bleeding. This leads to the co-occurrence of a thrombotic and haemorrhagic situation regardless of the underlying pathology. lt is therefore clear that an emergency physician’s first strategy should be primum non nocere by ensuring adequate tissue perfusion with fluid, electrolyte equilibrium, and correcting any concurrent harmful conditions (such as persistent diarrhoea in our patient), which trigger haematological relapse if untreated. On the one hand, it is true that there are limited therapeutic options in PM and DlC, but on the other, the best possible supportive care (including fluid and electrolyte balance) must be assured first, given the potential fatal consequences when not implemented. ln any case, comprehensive medical history analysis, complete clinical examination (including echoscopy), and personal continuous scientific development (relying on the best clinical evidence) remain the mainstay for proper diagnosis by any physician in order to ensure the best possible patient care.