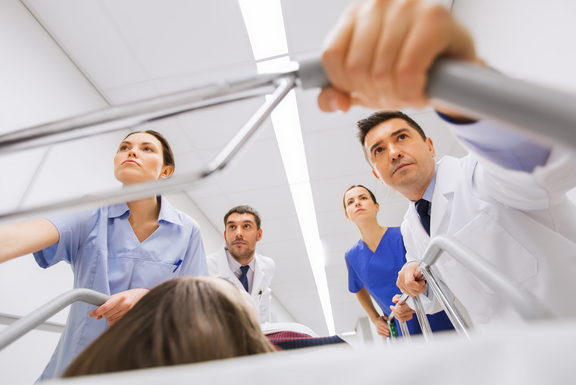 Stroke is a syndrome characterized by a sudden and quick development of neurological deficits due to vascular cause. The loss of function could be global, with permanent symptoms, until death, or transient (TIA) if blood supply is rapidly restore.
International Task Force defined this acute pathology “a preventable and treatable catastrophe”: it is the third cause of death in developing countries, accounting for 2-4% of the public health budget.
Management strategies include:
The starting point of this study is the concept that “time is brain”, enhancing the role of the interval between the onset of symptoms and the final treatment (the “door to needle time”, DNT).
This led us to carry a retrospective critical analysis, evaluate the DNT before and after the introduction of an internal protocol, aiming at the standards suggested in literature.

The stroke management pathway is mostly affected by time-wasting factors.
First, general population must be well educated in prompt recognizing of the key symptoms in order to early activate the emergency response.
Then, the patient must be adequately assessed, even on the territory (where the 118 must address the patient to the nearest hub hospital) and in the emergency room, where specialist physicians play a key role.
Tele-medicine communication would allow to support spoke hospitals (where a vascular neurologist is not available), and address patient’s transfer to the Hub hospital if needed.
Among all causes of thrombolysis delay, 80% correlate with extra-hospital dynamics. This means that our goal is the reduction of the entire “time-to-treat” time, which includes the above mentioned “door the needle” time, to which must be added the “onset to door” time, the interval between the onset of symptoms and the arrival at the ER of the hub hospital.
ODT depends on population’s sensibilization upon the matter, territory features, performance of the emergency services. DNT mostly reflects the quality of the intra-hospital stroke pathway.
Along this pathway, many strategies can immediately improve its efficacy:
As mentioned above, about 20% of thrombolysis delays are caused by intra-hospital factors, which can be divided into two main groups:
Table 1
In our stroke unit (Baggiovara Hospital, MO, Italy) Alteplase (rt-PA) was approved in 2005 for the treatment of acute ischemic stroke; from 2009 the window was extended from 3 to 4.5 hours (on-label treatment).
In 2011 a protocol was adopted to extend treatment to subgroups of patients with relative contrindications (off-label treatment):
The protocol starts with the activation of a “stroke code” from the 118 or the ER triage. This is immediately followed by the neurologist alerting; a brain TC is performed, eventually followed by advanced neuroimaging (Angio-TC, perfusion TC, brain RM).
This “stroke pathway” has been furtherly improved in 2015 with the introduction of the following:
Obtaining a DNT < 60 minutes is not only recommended in literature, but it must be our primary goal to grant the patient the best clinical benefit.
We extracted data from 2015 among all patients with acute ischemic stroke, candidates for thrombolysis, evaluating the DNT before and after the introduction of the new “stroke pathway” protocol. We also estimated the impact of the new protocol on the Modified Rankin Score (mRS) after 3 months from the acute episode.
183 patients were included, 84 females (45.9%) and 99 males (54.1%), average age: 72.8 ys. Average NIHSS at the time of presentation: 9.8.
The majority (84.1%) were directly evaluated by our Hub hospital; the remaining part were centralized after being first assessed in a spoke ER.
Each patient was interviewed for stroke risk factors (see Graph 1 below). 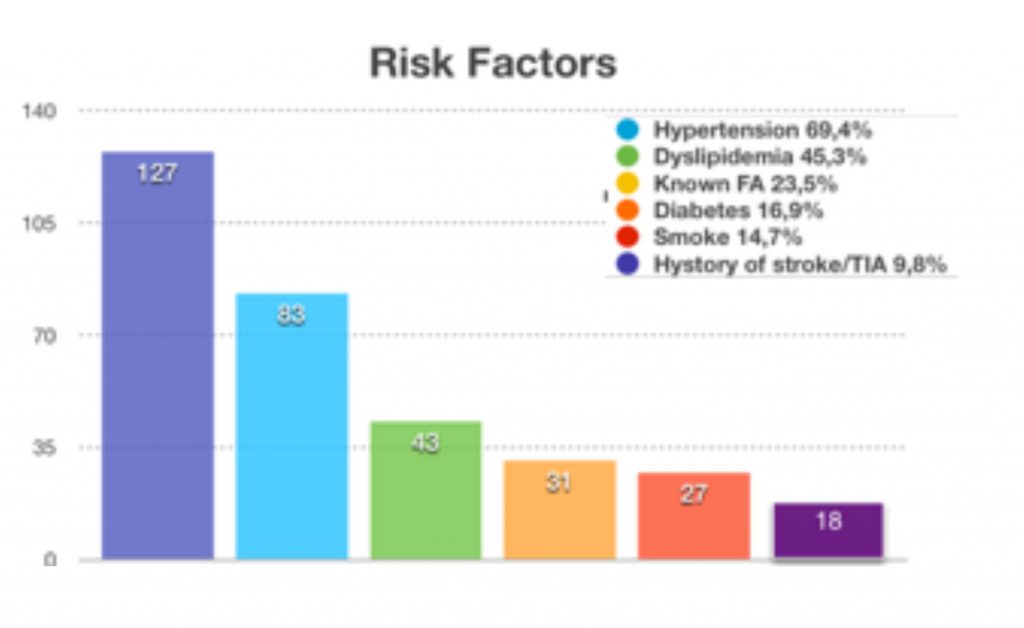 Door-to-needle time was widely variable (Graph 2); the lowest value (5 mins) is from a patient who had already completed the entire diagnostic path in the spoke hospital, and took benefit from a quicker treatment in the Hub center.
The longest time (1070 mins) regards a patient with unclear clinical features and negative basal brain TC.

Graph 2
The median DNT is 61 minutes, showing a further reduction of 5 minutes from the 2014 value (66 mins), not far from the recommended target. The new modified protocol increased the number of patients treated before 60 mins (from 48,6% to 56,7%), reaching the > 50% recommended by guidelines . [Graph 3] 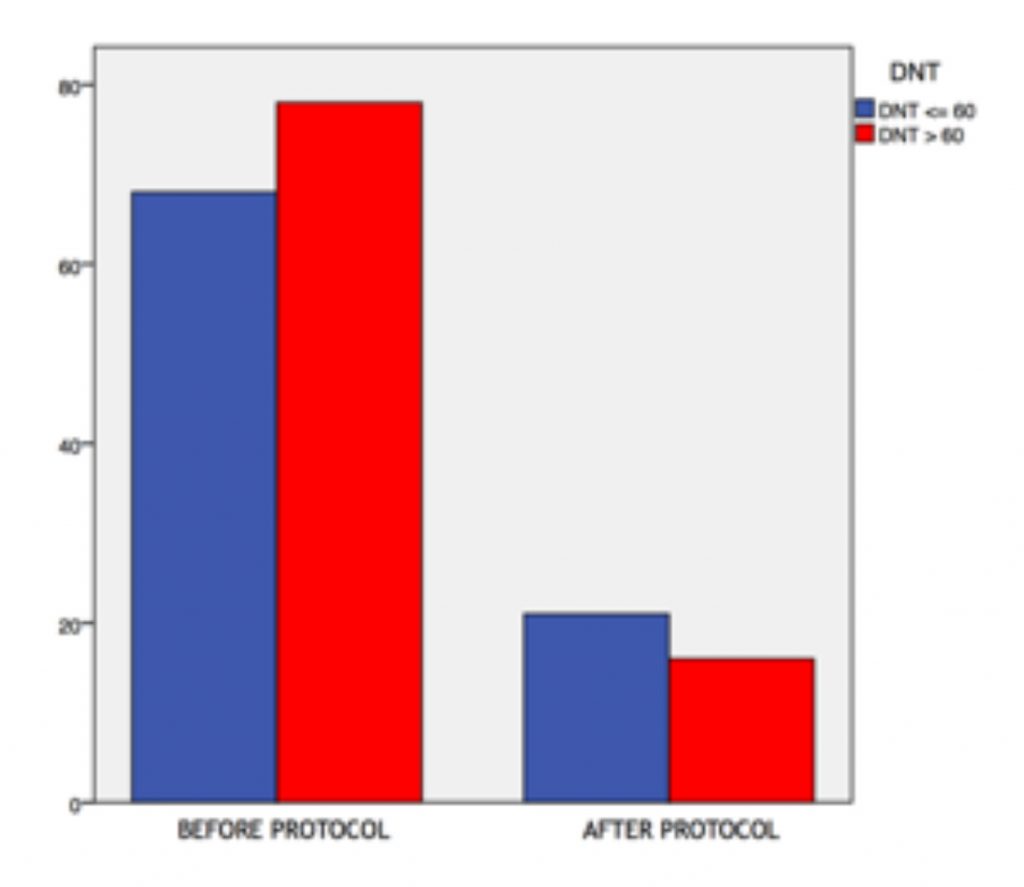 Examining DNT and medium-term outcome, we noted that patients treated before 60 mins showed better modified Rankin Scales, in terms of autonomy and minimal residual disability. This correlation resulted as statistically significant, suggesting the DNT as an independent outcome predictor. 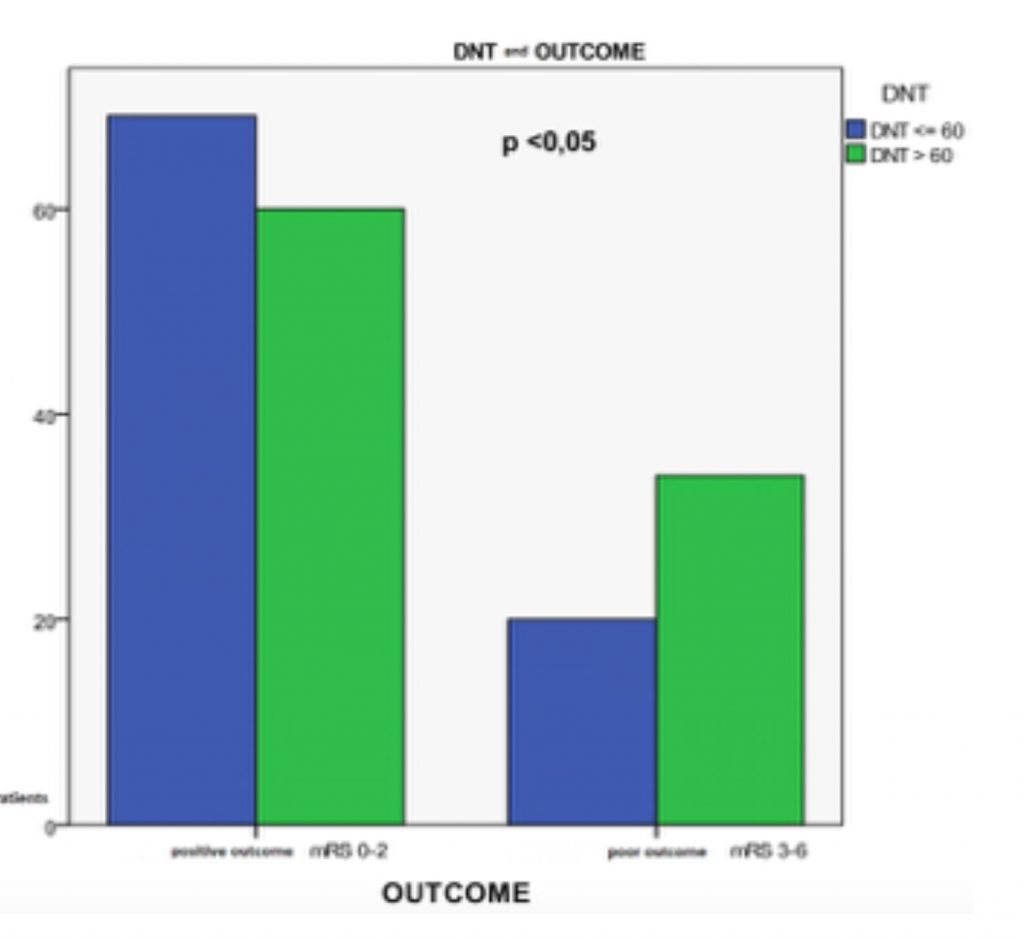 Moreover, the ODT influences the DNT with an inverse correlation; early recognizing of the symptoms, with quick transfer to the hospital, brings the physicians to a less aggressive approach, thus increasing intra-hospital procedure time. This happens for “early” (ODT <3 hours) and “late” (ODT >4.5 hours) patients, while for patients between 3 and 4.5 hours of ODT a quicker behaviour is observed (see Graph 5). 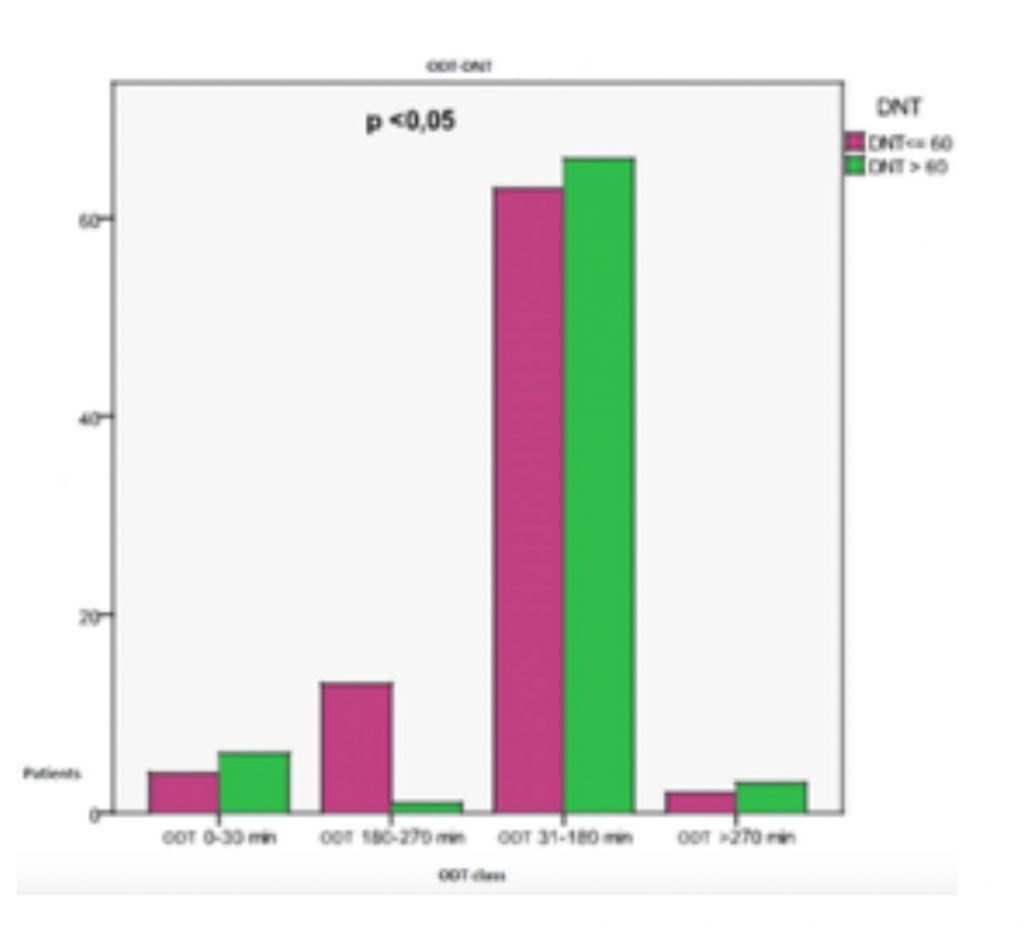 We observed no correlation with the outcome (mRS after 3 months) when comparing ON-label and OFF-label treatments.
On the contrary, mRS was affected by other variables such as: NIHSS at the time of presentation, site of stroke, presence/absence of early signs in the brain TC, hemorrhagic complications. All of these can be considered independent outcome predictors. 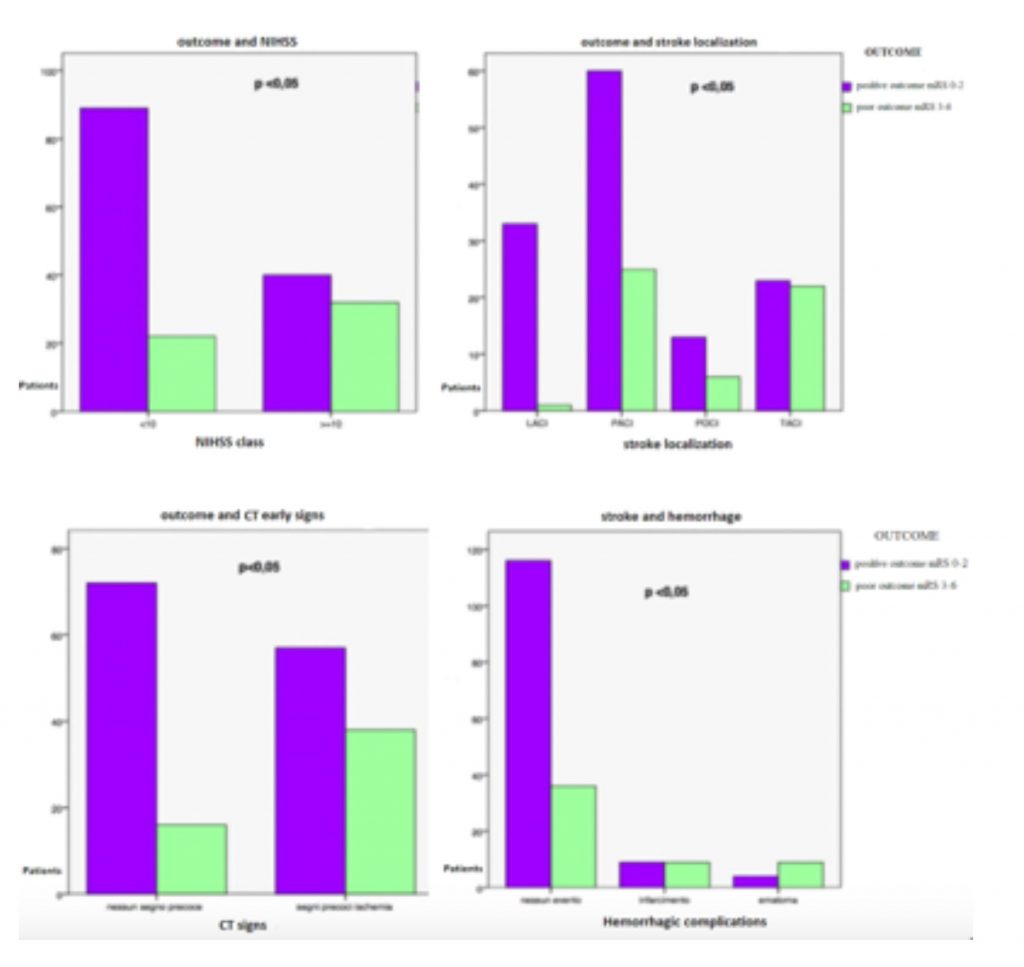 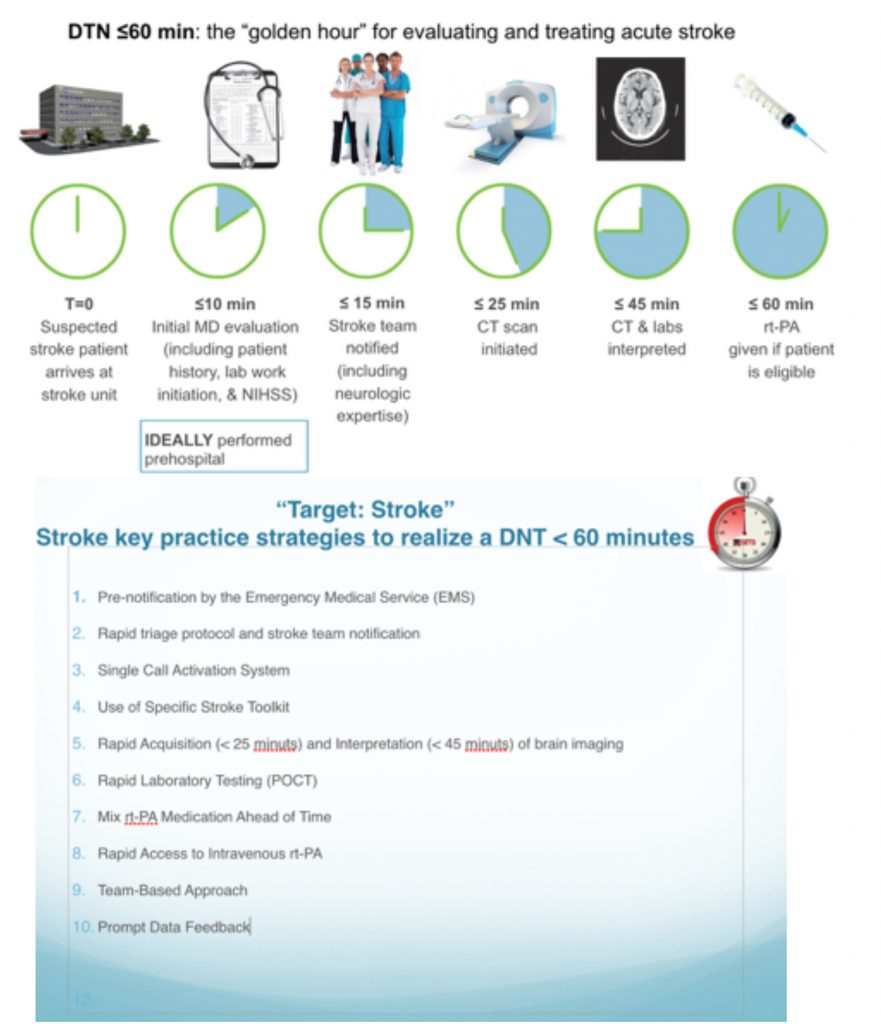 A considerably large amount of key tasks, which have to be performed in the quickest way, among all difficulties of an ordinary ER. 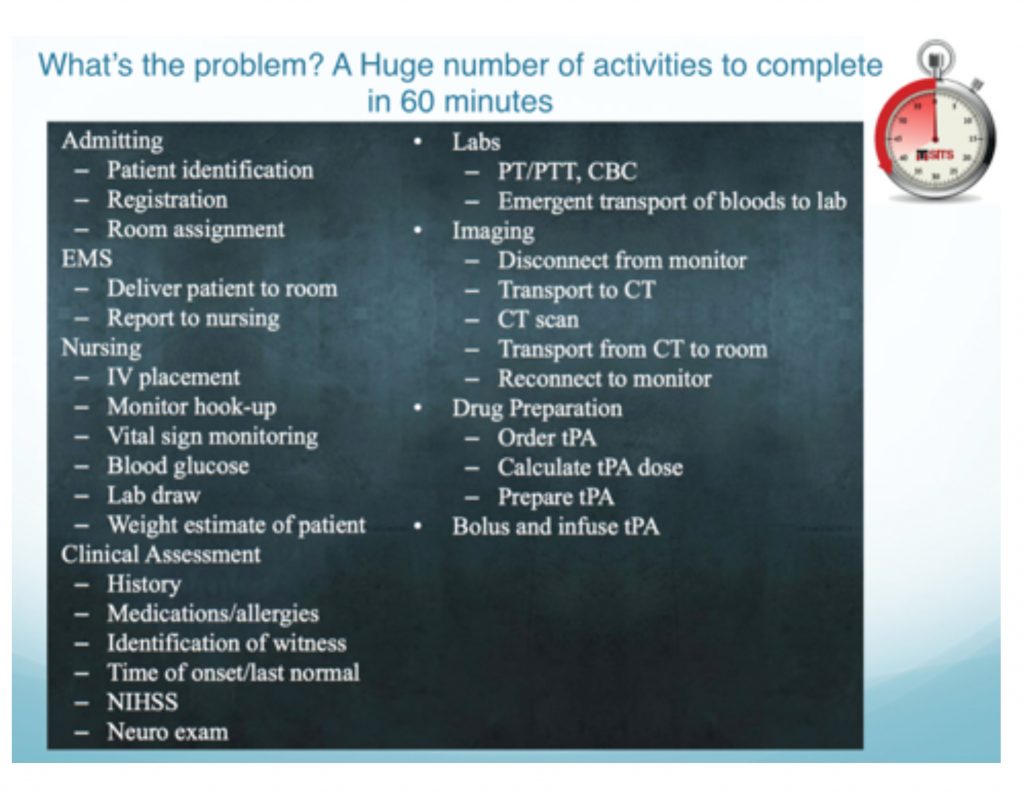 In a well-organized environment, tasks are divided and assigned in order to enable parallel working and reduce the total amount of time needed.

Our data shows that well-designed protocols are effective in improving outcomes for patients with time-dependent pathologies, among which stroke brings a considerable amount of costs in terms of budgets and long-term disability. Teamwork is essential, as well as the constant presence of the right specialist; in our experience, non-vascular neurologists showed to be less incisive in the thrombolytic decision leading to treatment delays.
Further improvements are needed in the recognition and management of posterior circulation strokes (which are not included in the Cincinnati score), even in the pre-hospital setting and during the triage at the ER.
Finally, it is worth noting how the “impression” the physician has from the patient, leads to different degrees of arousal and aggressiveness during the diagnostic-therapeutic path.