Acquired hemophilia A: a case report 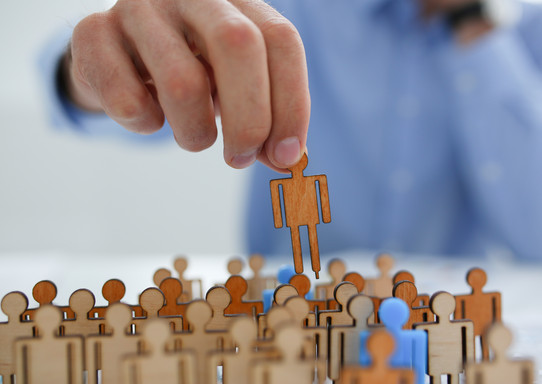 Acquired hemophilia A (AHA) is a rare bleeding disorder with an incidence of approximately 1.5 cases/million/year1 and is characterized by autoantibodies directed against circulating coagulation FVIII. These autoantibodies constitute the most common spontaneous inhibitor to any coagulation factor and may induce spontaneous bleeding in patients with no previous history of a bleeding disorder. An underlying medical condition can be identified in up to 50% of patients, including autoimmune diseases, solid tumors, lymphoproliferative malignancies and pregnancy.

A man arrived in the A&E for the appearance of an extensive and painful hematoma of the left leg. The hematoma stretched from the foot up to the thigh. The patient reported having had an accidental fall about a week before, but had hit the right leg. He denied trauma to the left leg. The vital signs were normal; blood tests showed reduced hemoglobin (8,9 g/dl), normal platelets, activated partial thromboplastin time (aPTT) was high/undetectable (when measured the following day, it was initially 56 sec), an elevated C-reactive Protein (PCR) equal to 15,30 mg/dl, increased fibrinogen level and neutrophil leukocytosis.
Ultrasound of the left leg had reveal a calf muscle lesion and a collection of fluid; an ultrasound Doppler study was also performed at the same time and it revealed superficial thrombosis of the left small saphenous vein. Therapy was initiated with enoxaparin 4000 UI s.c. q.d. as coagulation studies upon admition were normal and became abnormal only the following day as previously stated. The following day aPTT became undectable and notwithstanding the thrombosis, low molecular weight heparin theatment was suspended in lieu of the presence of hematomas and prolonged coagulation times.
His past medical history was significant for high blood pressure, rheumatoid arthritis and a history of tongue cancer. His tongue had previously been partially resected and communication was thus often impaired. He stated that he had never suffered spontaneous bleeding and was not aware of cases in his extended family. He did however report gingival bleeding during the previous weeks. He was not on anticoagulant nor antiplatelet therapy.
Notably, he brought test results performed about three months before, with completely normal values, including the PTT.
Considering the history of malignant disease, cancer markers were measured and were negative. An abdominal ultrasound showed no pathologic findings.
Initial hemoglobin was 8,1 g/dl, subsequently it declined and he received transfusions with packed red blood cells in order to maintain levels around 8 g/dl. A total of 8 units were given during his stay.
Preliminary investigations were carried out for coagulation inhibitors such as anti-cardiolipin antibodies, LAC and the dosage of coagulation factors:
Anti-cardiolipin antiboidies = 2 U/ml (0 – 10)
VIII factor value = 1,0 % ( 60 – 150);
Von Willebrand = 233 (66 – 176);
IX factor value = 126 % (60 – 135);
X factor value = 115 % ( 70 – 150);
XI factor value = 102 % (60 – 150).
On the seventh day of admission something unexpected happened: after transport on a stretcher to perform a radiological exam he developed extensive and massive bruising to the lower right abdominal wall and ipsilateral inguinal region, in absence of pain. (fig 1)
Urgent CT abdominal study was performed and it revealed a retroperitoneal hematoma. (fig 2) 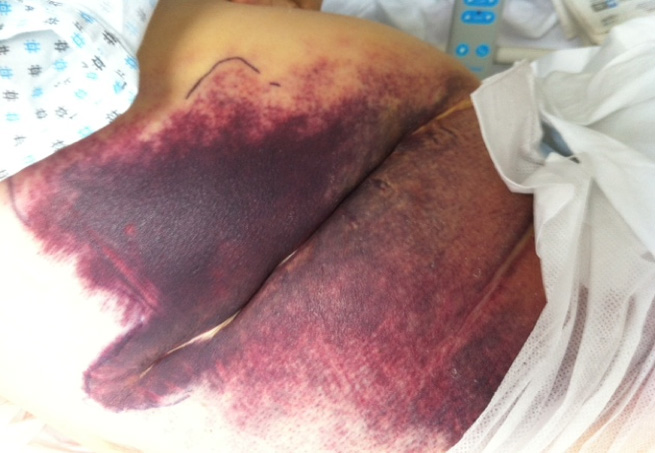 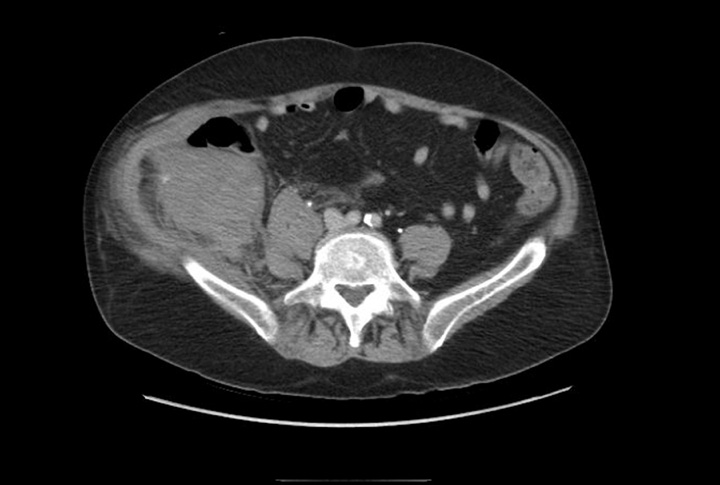 Angiography was immediately preformed with the intent of treating the bleeding vessels with therapeutic thrombosis, but the bleeding was not sustained by large vessels and thus treatment was not preformed.
The suspicion of a coagulation abnormality was confirmed on Mixing test. Mixing studies are performed on blood plasma in order to distinguish factor deficiencies from factor inhibitors, such as lupus anticoagulant (LAC) or specific factor inhibitors (e.g. antibodies directed against factor VIII). Mixing studies take advantage of the fact that factor levels that are 50 percent of normal should give a normal Prothrombin time (PT) or Partial thromboplastin time (PTT) result. In this case the test suggested the presence of autoantibodies.
In his case the value of mixing test was 30 sec, which was suggestive of a factor inhibitor. We hypostasized that they were most probably against factor VIII.
An assay for said auto antibodies was positive. Full dose steroid therapy was thus initiated and coagulation was corrected with activated factor VII (Novoseven), initially 7 mg every 3 hours and then 3 mg tid.
These are the aPTT values ​​after treatment with NovoSeven:
With this therapy and transfusions, the man showed normal values of hemoglobin and control of bleeding.
Later, the man was transferred to the hematology department where he continued full dose steroid treatment in association Factor VIII 500 (Emoclot) every 12-24 hours for 3 days. Hospital stay lasted ten days, the last aPTT was 42 sec; at discharge from Hematology was instructed to perform periodic monitoring of coagulation markers. No new neoplastic disorders have been detected.
Currently the patient is well and has not had new hemorrhagic episodes.

In conclusion, why did he suddenly developed bleeding?

Acquired hemophilia A (AHA), is a rare autoimmune disorder involving antibody-mediated depletion of coagulation FVIII. The condition is often associated with other autoimmune disorders, and the treatment involves replacement of FVIII and various modes of immunosuppression.
Although uncommon AHA are associated with a high rate of morbidity and mortality as severe bleeds occur in up to 90% of affected patients and the mortality rate is high, ranging from 8% to 22%.
Due to the variable bleeding phenotype of this disorder, the clinical picture ranges from life-threatening and traumatic bleeds to mild or no bleeding tendency. Patients with AHA are often elderly; co-morbidities and medications such as anti-platelet agents may aggravate AHA. Patient management is tricky because the bleeding rarely correlates with laboratory assessments. In contrast to congenital hemophilia, no high-level evidence exists to support treatment recommendations for AHA.
A prolonged aPTT may be attributable to coagulation factor deficiencies, lupus anticoagulant or heparin therapy. So-called mixing tests are customarily performed to distinguish between factor deficiency and the presence of an inhibitory substance. FVIII inhibitors are time and temperature- dependent, therefore mixing studies performed immediately and after 2 h of incubation should be compared. Prolongation of the aPTT in a mixture of patient and normal plasma after a 1-2 h incubation compared to an immediate mix is typical of FVIII autoantibodies. Immediate correction of the aPTT with normal plasma does not exclude AHA, these patients should be investigated for an FVIII inhibitor as well as for other potential causes of hemorrhagic symptoms. Irrespective of the result of mixing tests, specific factor assays should be performed in parallel to facilitate an early diagnosis.
Although not all patients with acquired hemophilia bleed, but in those that do, control of acute major or life threating bleeding is the immediate priority. In view of the potential side effects of hemostatic agents, particularly in elderly patients with comorbidities, the risks, benefits and costs of treatment must be weighed carefully and on an individual basis. Subcutaneous hematomas, even if extensive, may require only close observation but no specific treatment. In addition to clinical assessment, frequent monitoring of the hemoglobin (Hb) or hematocrit (Hct) is often a more reliable indicator of significant bleeding than radiological imaging.
It is recommended that anti-hemorrhagic treatment be initiated in patients with AHA and active severe bleeding symptoms irrespective of inhibitor titer and residual FVIII activity.
The lack of correlation between inhibitor titer and bleeding phenotype in AHA has recently been recognized, but remains poorly understood. The inhibitor titer should therefore not influence the decision to initiate treatment for significant bleeding or guide the choice of therapy.
Raccomandation :

The optimal therapeutic strategy for AHA inhibitor eradication has not yet been defined, but for the last two decades, immunosuppressive regimens applied most successfully to suppress autoantibody production have included corticosteroid therapy alone or in combination with cyclophosphamide. Recently, rituximab has emerged as a promising new agent for the eradication of inhibitors in patients with acquired hemophilia. Initial treatment should therefore usually consist of corticosteroids, either alone or in combination with cyclophosphamide, especially if the patient has already been treated with corticosteroids for other medical conditions. If no response is observed after 4-6 weeks, treatment with rituximab alone or in combination with corticosteroids is an alternative. It recommended that all AHA patients be treated initially with corticosteroids alone or in combination with cyclophosphamide to eradicate autoantibodies. Suggested steroid therapy for inhibitor eradication is 1 mg/kg/day PO for 4-6 weeks, either alone, or in combination with cyclophosphamide at a dose of 1.5-2 mg/kg/day for up to six weeks. In essence the goal is to control bleeding during the time that it takes for the immunosuppressive therapy to reduce production of anti FVIII auto antibodies. If this is not done prognosis will be poor. The bleeding captures our attention but it is the immunosuppression that will save the patient. The time needed to attain this is measured more often in weeks rather than days. The use of aFVII is based on its use in hemophiliacs that have developed allo antibodies to FVIII. The rational is that a huge amount of aFVII will simply by-pass the deficient FVIII. The problem with aFVII is the doses recommended are in fact huge and difficult to procure in the amounts needed. It may be necessary to use other more easily available products after the hyper acute phase is over.

In our case, the cause that triggered this bleeding remains unknown, although a possible explanation could be a reactivation of chronic autoimmune inflammatory disease (rheumatoid arthritis).
The most important factor, however, was finding the right path and the right therapy (also thanks to the literature) to a not so frequent disease in a DEA Department.