A case of cardiac perforation

Cardiac perforation by permanent pacemaker lead is a rare but possible event. Usually it occurs early, but less frequently it is a late onset complication. We report a case of delayed perforation by passive fixation lead, two weeks after the implantation, in a patient with no comorbidities. The strumental and clinical integrated approach allows rapid framing even complex clinical cases.

Cardiac perforation by permanent pacemaker lead is a rare but possible event. Usually it occurs early, but less frequently it is a late onset complication. We report a case of delayed perforation. The diagnosis was quickly with the integrated approach. Point of care ultrasound is fundamental in the setting of emergency medicine.

A 58 years old man with chest pain and dyspnea was admitted to Emergency department. His medical history was characterized just by an implantation of cardiac pacemaker (PMK) 15 days before the admission to treat a bradyarhythmia. Patient was diaphoretic, tachypnoic, mental status was preserved. Physical examination revealed tachycardia, soft heart sounds, murmure abolition in the left hemithorax. Blood pressure was 130/80 mmHg, oxymetry was 95% in o2 4l/min, heart rate was 140 bpm. EKG showed sinus tachycardia. Point of care ultrasound identified a massive left pleural effusion, a normal A profile at right lung, a normal inferior vena cava diameter in expiration with a collapsibility index of 50% and a pericardial effusion with a floating echogenic image, without cardiac tamponade (Fig 1). We administer metoprolol 5 mg i.v. to reduce heart rate, morphine 2 mg i.v., oxygen by venture mask 60%. We performed a thorax angio-CT scan that confirmed migration of PMK lead tip in the pericardium sac through the right ventricular wall, conditioning emopericardium and emothorax. Patient was admitted to cardiothoracic surgery (Fig 2). A two-step surgical strategy was chosen. In a first step, by an open surgery approach, the migrant ventricular lead tip was cut while the rest of the lead was left in intracardiac position, the perforation of RV wall was repaired and the hemopericardium and hemothorax were evacuated, with an improvement of the hemodynamic state of the patient. In a second step, two days later, the remaining portion of the PMK ventricular lead was removed transvenously and a new PMK was implanted. The patients was discharged five days later. 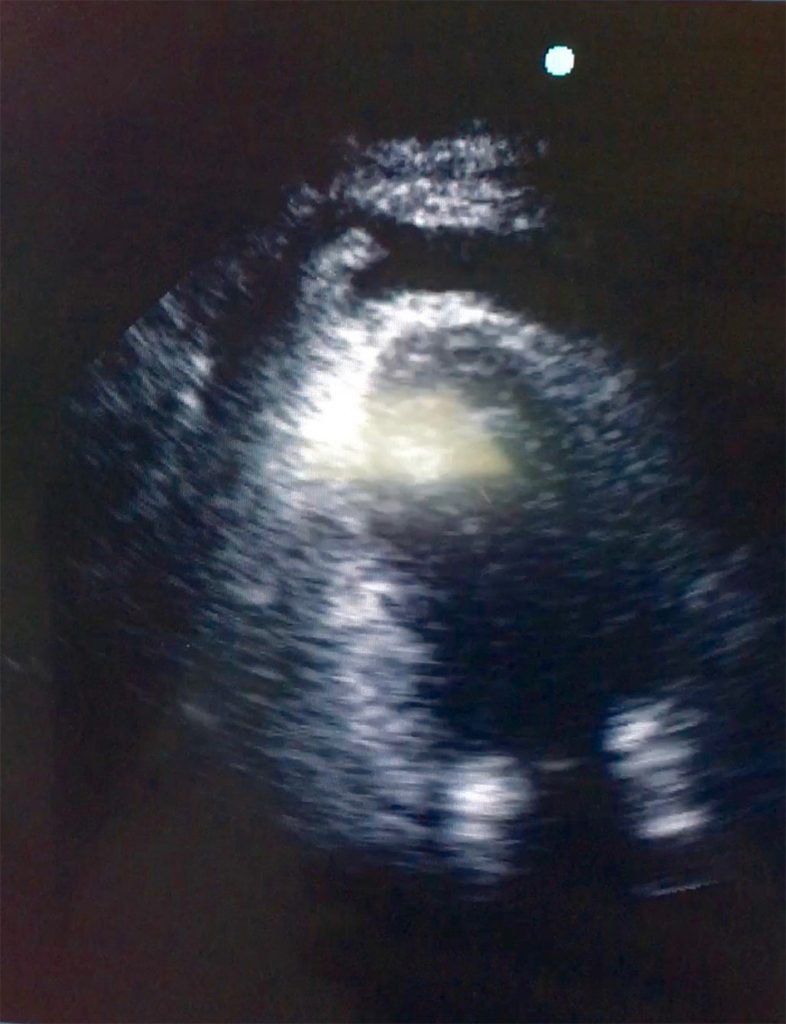 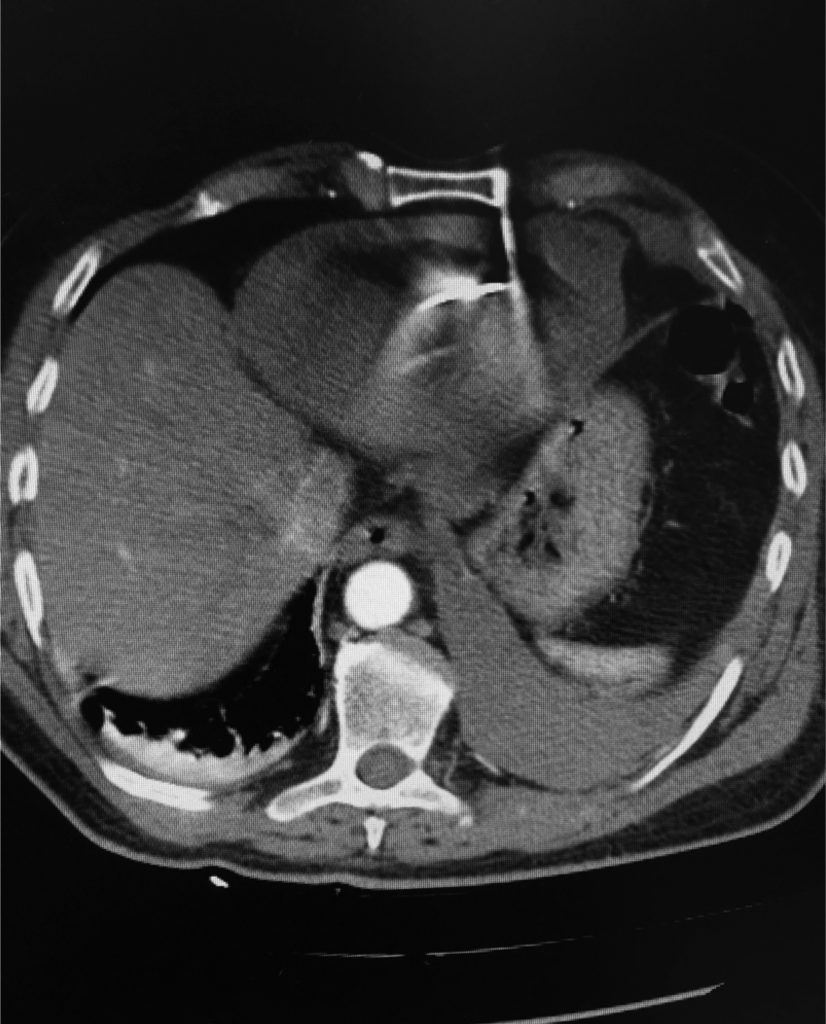 Cardiac perforation after pacemaker implantation is rare complications (0,1-0,8%) (1). Perforations occurring within 24 h after implantation are labeled as acute; those occurring within one month after implantation are subacute while perforations which occur after one month are labeled as chronic. Risk factors for lead perforation include patient characteristics such as female sex, age, small body habitus, thin heart walls; concomitant therapies such as steroids or anticoagulants; implant techniques; and the design characteristics of the lead (2). The symptoms depend by location of pacemaker lead: dyspnea, chest pain, emodinamyc instability if developed a cardiac
tamponade.
Management depends on patients’ hemodynamic status. In most patients, percutaneous lead extraction is a safe and effective management approach (3). Emergent surgical management is required if the patient is hemodynamically unstable or if the patient has a large pericardial effusion where tamponade may be imminent or a large pleural effusion with respiratory impairment is present or imminent. No consensus exists regarding the appropriate management of lead perforation in stable patients without symptoms or the management of chronic lead perforation without pacemaker malfunction.