An Attempted Suicide with Copper Sulphate Injected Intravenously: Pathophysiology and Therapy about a Case Report 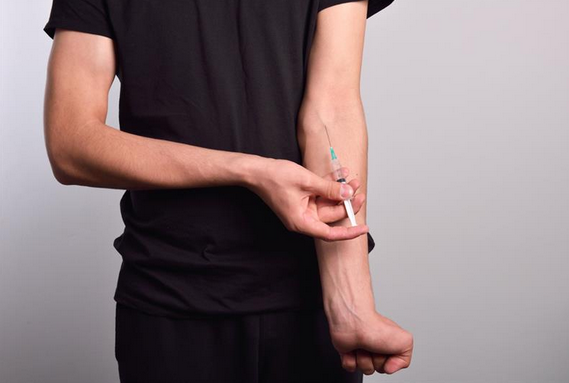 Acute copper sulphate poisoning is an unusual event, rarely following parenteral exposure, complicated by toxicological effects as haemolytic anaemia, methaemoglobinaemia , hepato-renal damage and acute rhabdomyolysis. Currently, the therapeutic management ignores unique classes of evidence and is mainly based on supportive and chelation therapies. Case details. This case report describes acute copper sulphate poisoning in a 37-year-old man who attempted suicide by self-injecting an unknown amount of copper sulphate. Within three days the patient developed severe intravascular haemolysis and rhabdomyolysis. Initial therapy relied on intensive supportive care with fluids administration, electrolyte correction and packed red blood cells transfusion. The D-penicillamine (30 mg/Kg/day per os) was prescribed as chelation therapy by the poison control centre. The N-acetilcysteine and ascorbic acid were administered to prevent further oxidative stress. Later on, two sessions of therapeutic plasma exchange were performed in order to support the drug therapy. Haemolysis and rhabdomyolysis reversed throughout the hospital stay. Discussion. In this case the antidotic and antioxidant therapy resulted effective to reverse haemolysis and rhabdomyolysis and to prevent hepatic and renal damage. Moreover, this case underlies that therapeutic plasma exchange should be considered as an additive measure to undertake since the earlier stages of the emergency intervention.

Acute copper sulphate poisoning is an event complicated by toxicological effects: haemolytic anaemia, methaemoglobinaemia, hepato-renal damage, acute rhabdomyolysis. The therapeutic management ignores unique classes of evidence and is based on supportive and chelation therapies. In this case: i) the antidotic and antioxidant therapy resulted effective to reverse haemolysis and rhabdomyolysis and to prevent hepatic and renal damage, ii) therapeutic plasma exchange should be considered as an additive measure to undertake.

Copper Sulphate (CuS) is a salt formed by treating cupric oxide with sulphuric acid and it is mainly used in metal industry and agriculture, particularly in compounds such as fertilizers, insecticides and fungicides. Chronic intoxication is often occupational related. Acute Copper Sulphate Poisoning (ACuSP), instead, usually results from oral ingestion with suicidal purpose, and rarely from parenteral exposure: only four cases of parenteral ACuSP have been reported in literature to date. 1,2,3,4 Therefore, consensus regarding the therapeutic management is still missing.1 This report presents a case of intravenous ACSP as suicide attempt.

A 37-year-old man was admitted at his local Emergency Department (ED). Three hours previously, he self-injected intravenously an unknown amount of a solution of CuS as suicidal attempt. The patient had a history of heroin and cocaine use disorders (DSM-5). At the admission, he was fully conscious, Glasgow Coma Scale (GCS) 15, T 36.5°C, Respiratory Rates (RR) 18 breaths/min, SpO2 96% on room air, Blood Pressure (BP) 105/75 mmHg and Heart Rate (HR) 120 beats/min. Physical examination was normal. He presented tremors and diffuse myalgia. Laboratory results were within the range of normality (Table 1). Serum Copper (Cu) levels were 263 μ/dL (normal range 70-140 μ/dL) 24 hours after admission. On day 3, the patient was moved to the ED of Umberto I, Policlinico of Rome. At ED admission, the patient was alert and oriented, GCS 15, T 38°C, RR 18 breaths/min, SpO2 96%, BP 130/70 mmHg, HR 72 beats/min. Physical examination revealed pallor, jaundice, brown to red urines and signs of extravasation by the antecubital area of both arms (Figure 1). He was complaining epigastric pain. Laboratory findings showed: normochromic normocytic anaemia with signs of intravascular haemolysis, rhabdomyolysis and rising levels of methaemoglobin (Table 1). The patient received fluids therapy (0.9% NaCl), electrolyte correction (KCl, MgSO4 and CaCl2) and was transfused with 4 Units of Packed Red Blood Cells. Moreover, piperacillin/tazobactam and clindamycin were administered for peri-injection cellulitis, salicylic acid as antipyretic and omeprazole for gastric protection. The poison control centre proposed to administer N-acetilcysteine at the loading dose of 150 mg/Kg in 500 ml of Dextrose-Water 5% (D5W) i.v. over 120 minutes, then 300 mg/Kg/day in 500 ml of D5W i.v.; D-penicillamine (30 mg/Kg/day per os); ascorbic acid 8 g/500 ml of 0.9% NaCl at the rate of 21 ml/h. As critical condition was persisting, Therapeutic Plasma Exchange (TPE) was performed on day 5 and on day 6 in order to support the drug therapy, and serum Cu levels were assessed immediately prior and after each session (Figure 2). TPE was carried out using the continuous flow separator, exchanging 1000 ml of plasma with 5% human albumin solution, halting both the procedure at the onset of fever and hypotension. On day 7 the patient was transferred to the intensive care unit and then to the surgery unit for wounds toilet. On day 12 the patient was moved to the psychiatric unit and on day 13 D-penicillamine was discontinued due to increasing liver function tests. On day 22 he was admitted to the medical department to continue the diagnostic and therapeutic iter. On day 32 he was finally discharged asymptomatic and with normal laboratory values (Table 1). 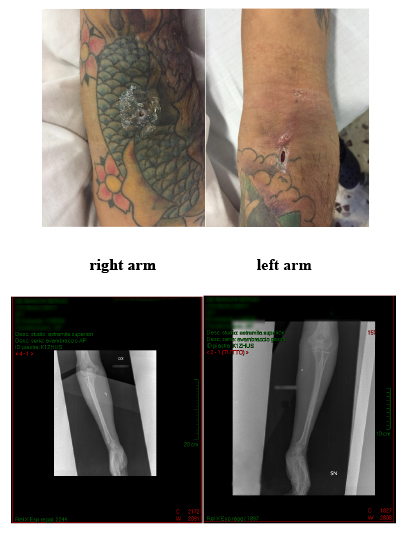 Figure shows a CuS extravasation by the antecubital area of both arms. 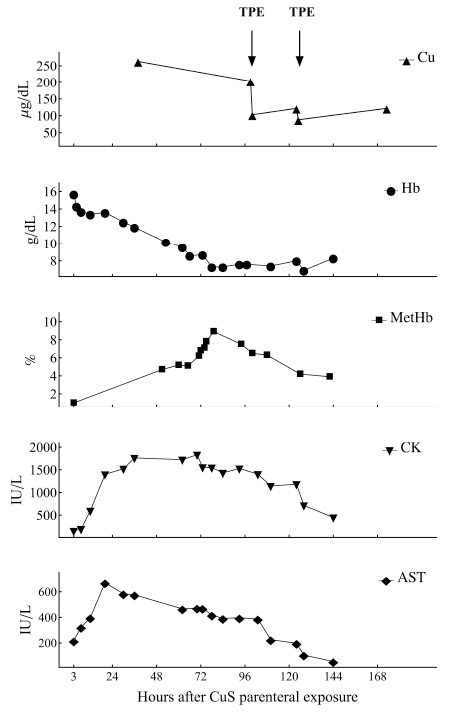 Figure shows how Cu levels rapidly falls after each session of TPE and simultaneously there is an improvement of muscle damage index and a transient decreasing of Hb level.

Table 1. Laboratory features in relation to time after Copper Sulphate (CuS) intravenous self injection

As an essential trace element involved in many enzymatic reaction, the human body contains from 50 to 120 mg of Cu. The latter is mainly absorbed through stomach and duodenum and it is characterized by a rapid serum peak reached after 1-3 hours from oral intake. Alfa-2-globulin-ceruloplasmin transport up to 80% of Cu, while the remaining part is loosely bound to amino acids, vitamins and albumin. Cu is stored in the liver by metallothionein and has an enterohepatic cycle, being excreted mainly through the bile. Only a minor amount of Cu is eliminated by renal excretion. In acute poisoning, transport mechanisms are reversed and Cu is mostly carried by albumin, making a toxic metal-protein complex. CuS toxicity mainly affects red blood cells, hepatocytes and myocytes and it is proportional to the CuS’s intracellular concentration. Cu inhibits both glucose-6-phosphate dehydrogenase and glutathione reducing the free radicals scavenging activities. Moreover, Cu increases cell membrane permeability through the inhibition of the NA+/K+ATPase pump. This process eventually leads to intravascular haemolysis, rhabdomyolysis and centrolobular necrosis with hepatitis. Furthermore, ACuSP causes acute tubular necrosis in the 20-40% of cases, mainly through a direct and an indirect toxic effect which follows hemoglobinuria, myoglobinuria and hypovolemia.5 When ACuSP follows CuS ingestion well known gastrointestinal manifestations occur probably linked to the direct contact of the metal with the gastrointestinal mucosa. Moreover these signs are also documented after voluntary parenteral ACuSP.3 The management of ACuSP is mainly symptomatic and supportive including fluids administration, electrolyte correction and packed red blood cells transfusion. Due to the CuS caustic effect, endoscopy rather than gastric lavage and activated charcoal should be performed within the first 24 hours post­ingestion. As long as methemoglobin concentrations are greater than 20% to 30% (or at lower levels in patients with anemia, underlying pulmonary or cardiovascular disease) methylene blue is recommended in addition to oxygen therapy at an initial dose of 1 mg/kg IV over 5 to 30 minutes, which may be repeated one hour later. To the best of our knowledge, there are limited data regarding the use of the chelation therapy in the setting of ACuSP. The management of patients with Wilson disease provides most of the data concerning its dosing and efficacy. Cu intoxication suggests that chelation therapy should be initiated when hematologic or hepatic complications as well as other manifestations of severe poisoning are present, and should be continued as long as blood Cu remains above normal values or as long as symptomatology persists.6 The D-penicillamine, British Anti-Lewisite (BAL) and Ethylene Diamine Tetra Acetate (EDTA) have been used as antidotes.6 The D-penicillamine is an orally bioavailable monothiol chelator currently used in the treatment of lead, mercury and copper toxicity. Through chelation of unbound Cu ions, it prevents them to participate in redox reactions and it increases their urinary excretion in patients with normal renal function. The recommended dose is 20–30 mg/kg/day by 3-4 administrations.7 Hepatic recovery and survival rates are strongly enhanced by both early intake and exposure interruption. Nevertheless, D-penicillamine may cause aplastic anemia, agranulocytosis, and renal and pulmonary disease.6 When oral intake of D-penicillamine is contraindicated, intramuscular administration of BAL is recommended. The latter promotes copper excretion though biliary elimination and therefore it should be preferred in patients with renal failure. The recommended dose is 3.0 to 5.0 mg/kg/4-6 hours in first two days and tailed off over a total of 7-11 days. Main adverse reactions include urticaria and persistent hyperpyrexia. Another parenteral option is represented by EDTA, which should be carefully administrated in presence nephropathy, as it carries the risk of acute tubular necrosis. The dose of this agent is 75 mg/Kg/day IM or slow IV infusion given by 3-6 administrations. Haemodialysis is indicated only in case of persistent renal failure.8 TPE removes large molecular weight substances, expecially those which are highly bounded to plasma proteins. The procedure is carried out in urgency using the continuous-flow separator, exchanging plasma with physiologic fluids such as 5% human albumin solution or fresh frozen plasma, closely assessing serum and apheresis plasma Cu levels. TPE may causes a transient fall in blood-clotting factors, nevertheless clinically significant bleeding is rare reported. Other adverse effects include vasovagal episodes, fluid overload or under-replacement, and allergic or anaphylactic reactions. Few cases of using of TPE in the setting of ACuSP are available so far.9 Rapid Cu removal may avert or bridge to liver transplantation in patients with Wilson disease.10 In ACuSP, like in Wilsonian crisis, TPE may remove free and bound plasmatic Cu.9 Early reduction of CuS plasma levels might prevent the further toxic deposition, moreover it may provide a plasmatic redistribution of tissue Cu not definitively settled. In this case, after each TPE sessions there was a “rebound effect” consisting in a rising trend of plasmatic Cu level. Simultaneously there was an improvement of muscle damage index and a transient decreasing of haemoglobin levels, probably due to the Cu fraction that flows back to the blood compartment, causing haemolysis (Figure 2).

ACuSP is a rare event, which usually follow extra-parenteral exposure. However, given the high mortality due to its related multi systemic damage, physicians should be familiar with the management of such cases. Treatment of ACuSP is mainly symptomatic and supportive, including fluids administration, electrolyte correction and packed red blood cells transfusion. Despite the little clinical experience in the setting of ACuSP, D-penicillamine, BAL and EDTA are commonly used as chelating agents. Furthermore, N-acetylcysteine and ascorbic acid can be administered to prevent further oxidative stress. Even if TPE is not recommended by the American Society for Apheresis (ASFA) guidelines in the management of ACuSP,11 this case enlightens that it might be useful in combination with antidotic and antioxidant therapy, to reverse haemolysis and rhabdomyolysis and to prevent hepatic and renal damage. In conclusion TPE should be considered as an additive measure to undertake since the earlier stages of the emergency intervention.

The authors report no declarations of interest.

We acknowledge the assistance and contributions of all the employees of the ED of Policlinico Umberto I of Rome; Shafii Bafti Mahaz MD and Maria Gozzert MD who performed the plasma exchanges. Moreover, we thank Andrea Maselli (Theoretical Physicist) and Antonio Lardo MD for their technical supports.