A case of heat stroke in abuse of energy drinks 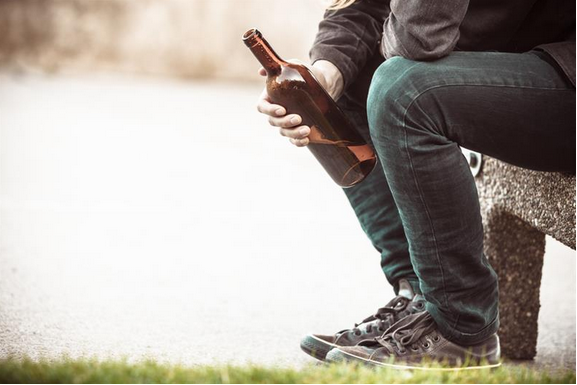 To describe the case of a young man affected by a caffeine intoxication and heat stroke in abuse of energy drinks.

Single case. A 20 year-old man was brought to the emergency room because found at home unconscious, with high fever and tonic seizure. His friends reported an history of sleep-deficiency, abuse of caffeinated energy drinks and hot environment exposure. The laboratory exams revealed leukocytosis with neutrophils 80%, normoglicaemia, normal electrolytes.  Drug tests were negative. The head CT and lumbar puncture were normal.  The diagnosis of admission in intensive care unit was “heat stroke in abuse of energy drinks” and the therapy was set for support and cooling in a progressive and spontaneous resolution. Conclusions: we postulate a caffeine intoxication and heat stroke in abuse of energy drinks in triggering the life-threatening events described in this case. The adverse effects of energy drinks can be related to either the toxicity of ingredients together to specific situations (like hot environment exposure and sleep deprivation). There are many reports of epileptogenic process triggered by caffeinated energy drinks but in this case we hypothesize that energy drink linked diuresis, along with prolonged hot environment exposure, predisposed to dehydration and heat stroke with a worsening of the neurologic adverse effects of caffeine intoxication alone.

A 20 year-old man was brought to the emergency room of our hospital because he was found at home unconscious, high fever (body temperature 40°C) and tonic seizure. The patient had no history of head trauma, fever or infection disease, nevertheless illicit drugs and or alcohol abuse. His friends reported: sleep-deficiency in the last day, and abuse of caffeinated energy drinks (about 8 cans= 2 liters). The patient spent the day in the pool, in a very hot summer day.
At admission, the patient was in a coma state, GCS 6 (E1, V1, M4). Pupils were wide, symmetric, with good reaction to light. No meningeal signs were found. Blood pressure was 140/80 mmHg, heart rate 110 bpm in sinus rhythm, respiratory rate 20 pm and tympanic temperature 40.3°C. Oxygen saturation was 98%, chest examination was clear. ECG showed sinus tachycardia. About 10 minutes after admission, the patient convulsed in a tonic-clonic manner with hyperextension of the right arm and leg. This condition was resolved by the administration of midazolam 5 mg iv.

In a persistent state of coma, the patient was transferred in the Intensive Care Unit (ICU). At admission in ICU the GCS rised to 9: the patient opened his eyes at noxious stimulus, retracted the legs to pain, no verbal response. The spontaneous respiratory activity was valid with no signs of obstruction of the upper airways. Arterial blood gas analysis revealed no pathological signs in patient with persistent hyperpyrexia.
The diagnosis of admission was “heat stroke in abuse of energy drinks” and the therapy was set for support and cooling in a progressive and spontaneous resolution. The blood tests showed slight reduction of leukocytosis. EEG revealed background activity diffusely slow, devoid of elements specifically pathological.
Within hours the patient was awakened to the verbal stimulus but uncooperative and the body temperature was reduced. In the night the patient was alert, performed spontaneous movements, but without contact with the environment. A second EEG revealed marked brain suffering, prevalent in frontal leads. A magnetic resonance showed no pathological signs.  A toxicological exam for caffeine to 48 hours was negative. Cultural blood and urine exams were negative.
The next few days there has been a further improvement in leukocytosis and procalcitonin up to normalization. The patient was alert, cooperative and he was transferred to Medicine Department. A last EEG was normal and at day 6 he was discharged home.

We postulate a heat stroke and abuse of energy drinks in triggering the life-threatening events described in this case.
There are many energy drink brands on worldwide market. These beverages often contains caffeine, taurine, B vitamins and carbohydrates, and vary widely in caffeine concentration. The adverse effects of energy drinks can be related to either the toxicity of ingredients together to specific situations (like hot environment exposure and sleep deprivation). Moreover, these energy drinks are often assumed in combination with alcohol or illicit substances.
Toxicity of energy drinks depends primary on caffeine, its plasma concentration and time of consumption. For most adults, consumption of up to 400 mg of caffeine per day appears to be safe. It can be assumed that the patient has hired 640 mg of caffeine in a day during a prolonged hot environment exposure. Unfortunately we could not record caffeine plasma concentration during the first hours and the toxicological exam executed 48 hours later was negative.
Caffeine is a methylxanthine associated with cardiac and central nervous system stimulation. In large doses it can be strongly toxic, resulting in arrhythmia, tachycardia, myocardial ischemia, vomiting, seizures, coma and death (1), increase platelet activity and decrease endothelial function (2), increase diuresis (3).
There are many reports of epileptogenic process triggered by caffeinated energy drinks. The proconvulsivant effect of caffeine seems to be dose dependent (3). Chung SS et al hypothesize that energy drinks may induce seizures in genetically susceptible persons, especially if taken on an empty stomach (4). In an observational study of 217 patients who used caffeinated energy drinks, 87 percent reported adverse effects (palpitations, tremors, agitation, and gastrointestinal upset), 21 of them demonstrated serious neurologic or cardiac signs (arrhythmias, myocardial ischemia, seizures, hallucinations), and more than 125 were hospitalized for adverse effects (5). Increasingly being sold as a dietary supplement, caffeine anhydrous is being consumed on a daily basis by many people. Jabbar SB et al reported a case of fatal caffeine overdose resulting from the self-administered ingestion of approximately 12 g of pure caffeine anhydrous (6).
The effects of energy drink ingredients other than caffeine remain controversial. It is likely that the risk of taurine toxicity after energy drink consumption remains low. Studies have shown that taurine has an inotropic effect on cardiac muscle and potentiate caffeine induced muscle contracture (7). However, few studies regarding taurine toxicity have been performed and there are not sufficient data to suggest what level of taurine consumption might be unsafe.
Along with caffeine intoxication, the role of heat stroke was significant in this case. Heat stroke is a syndrome of acute thermoregulatory failure in warm environments characterized by central nervous system depression and core temperature usually above 40°C. Dehydration predispose to heat stroke because it may decrease skin and muscle blood flow and jeopardize any movement of heat from the core to the environment. Adequate fluid intake and maintenance of a normal vascular volume help prevent heat stroke.  Classic heat stroke occurs more frequently when  environmental peak temperatures exceed 32°C and minimum temperatures do not fall below 27°C. Acclimatization is a fundamental physiological process during which human body adapts to prolonged exposure to high temperatures and humidity (8). In this case, the absence of acclimatization was a factor which predisposed the patient to heat stroke (the patient came in Italy from Northern Europe for holidays). The primary injury in heat stroke is owing to the direct cellular toxicity of temperature above 42°C. Above this temperature, referred as the critical thermal maximum, cell function deteriorates owing to cessation of mitochondrial activity, alteration in chemical bonds involved in enzymatic reactions and cell instability. Heat stress activates numerous cytokines that modulate body’s response to increased temperature (TNFα, IL1β, IL2,  IL6, IL8, IL10 and IL12). This condition may explain the rapid rise of procalcitonin in our patient, without any sign of infection at cultural exams, such as its rapid reduction with the resolution of the heat stress. Patients with heat stroke may present profound stupor or coma, seizures, cerebral edema and local hemorrhage (9).
There is no specific treatments for caffeine intoxication and heat stroke. In these conditions the treatment is only supportive including close observation, airway control, fluid resuscitation, anticonvulsant drugs and cooling by evaporative or direct external methods.

Toxicity of energy drinks depends primary on caffeine concentration and time of assumption but adverse effects can be related also to environment exposure, assumption in association with alcohol or illicit substances, dehydration and sleep deprivation.
In this case we hypothesize that caffeinated energy drink linked diuresis, along with prolonged hot environment exposure, predisposed to dehydration and heat stroke with a worsening of the neurologic adverse effects of caffeine intoxication alone.