Patients with acute coronary syndrome without ST elevation (NSTEMI) should begin a double antiplatelet therapy (DAPT) immediately after the diagnosis. In order to evaluate if during Emergency Room (ER) permanence NSTEMI patients were adequately treated, we analyzed data from the survey on NSTEMI management set up by the Lazio section of the Italian Emergency Society (SIMEU): the “NSTEMI-SIMEU Lazio 2014” project.

We collected data on therapy administration and PCI timing in all consecutive patients with NSTEMI who visited Lazio’s ER from May 2014 to July 2014.

There was an inverse relationship between PCI timing and treatment administrated during ER permanence: the longer PCI is waited the less care was given.

Patient with a diagnosis of unstable angina or NSTEMI account for a large number of large number of ER visits each year [1-3]. Although patient affected by NSTEMI are typically admitted promptly after diagnosis, under condition of hospital crowding, these patients may have prolonged ER stays as they await transfer to an inpatient unit or to the catheterization laboratory. For this reason, between May and July 2014, the section of Lazio of the Italian Society of Emergency Medicine (SIMEU) set up the “NSTEMI-SIMEU Lazio 2014” project and collected data related to the management of Non ST Elevation Myocardial Infarction (NSTEMI) and unstable angina (UA) patients in the emergency room (ER) of the region [4].

In NSTEMI the decision on timing of PCI depends on careful evaluation of the balance between risks and benefits of an immediate invasive strategy [5]. Whereas PCI could be delayed beyond 72hr, the antithrombotic therapy should be begun as soon as possible, immediately after the diagnosis. The “NSTEMI-SIMEU Lazio 2014” project revealed significant differences in the management of these patients among the various hospitals involved in the study. It has been observed that patients referred to hospitals without a hemodynamic laboratory active 24hr/24hr (SPOKE) underwent PCI later than those who were treated in hospitals with hemodynamic laboratory available 24hr/24hr (HUB) [4]. Data analysis highlight that the delay in PCI treatment observed in SPOKE compare to HUB was independent from patient risk assessment [4] and it depended at least in part to inefficient protocols for transferring patients to higher level health centers. Therefore, it became critical to know if patients who wait longer PCI are adequately treated while they are still waiting the procedure. In order to highlight possible reasons for less than optimal management of these patients and, with the final purpose to improve patient care in the region, we analyzed again the data focusing on the therapy administrated and the timing of PCI.

Materials and Methods of “NSTEMI-SIMEU Lazio 2014” project were extensively described previously [4]. Data was collected from the seven hospitals that participated to the project. All consecutive patients with NSTEMI, who visited the emergency departments from May 2014 to July 2014 were included. Inclusion criteria were: 1. Patients with chest pain and / or symptoms of acute heart failure with at least a determination of troponin positive and who are subsequently transferred or admitted; 2. Age greater than 18 years old; 3. Patients with acute coronary syndrome: NSTEMI and UA candidates for urgent invasive strategy (cardiac catheterization followed by revascularization within 120 minutes of arrival in the ER). Exclusion criteria were age <18 years, diagnosis of STEMI and all other causes of chest pain rather than NSTEMI. All patients provided written informed consent, and the study was approved by the ethics committee at each center (protocol number: CE/77926).

In addiction to baseline characteristics, risk factors, medical history, symptoms, vital signs and main scores (CPS, TIMI, GRACE, CRUSADE), we collected data related to medical therapy administered, if it has been any invasive procedure and when PCI was performed.

Data were presented as percentage of total number of patients. Looking for possible difference in treatment strategy, we grouped data in three different classes depending on when actually PCI was performed: before 24 hours (<24hr), between 24 and 72 hours (24-72) and later than 72 hours (>72hrs) and data within the groups were compared. Variables were test for independency and homogeneity in the distribution of the different groups by Chi-square (c2). A value of p<0.05 was considered statistically significant. All analyses were performed with SPSS system software (IBM SPSS statistics, Version 20.0, SPSS Inc., Chicago).

Results. Data regarding timing of PCI and therapy administrated during ER permanence were available for 95 patients of the 139 enrolled in the original project (79% of the sample); 60% of the patients selected were treated in a hospital with and hemodynamic laboratory active 24hr/24hr.

Demographic characteristics, risk factors, co-morbidities and risk score evaluation of the patients were summarized in Table 1. 82 patients underwent PCI: 16 patients underwent the procedure within 120 min from the hospital admission, 33 were still treated within 24hrs, 26 in the period between 24 and 72hrs and 7 patients beyond 72hr. 52% of the patients were treated within 24hr. Patients male, with a known familiarity for cardiovascular diseases, smokers and affected by hypertension are more likely to undergo PCI early within 24hr. Surprisingly, the anamnestic evidence of diabetes, renal failure and cardiovascular diseases did not change significantly PCI timing, as well as TIMI score or GRACE score. A high-risk evaluation, according to ESC guidelines, did not increase the probability to undergo PCI early.

Only 35% of the patients received the recommended triple therapy with double antiplatelet treatment and anticoagulation, 41% patients received an incomplete antithrombotic therapy and 24% of the patients (29 patients) did not receive any therapy during the transition in emergency room. In this last group of untreated patients, 52% was already in a chronic antiplatelet therapy, 52% had an increased hemorrhagic risk and in only 4 cases the PCI was performed in less than 120 min, in which the urgent transfer to the hemodynamic laboratory could justify the absence of recorded treatment at ER.

Data analysis suggests that there is an inverse relationship between PCI timing and adherence to guidelines recommendations for therapy [5]: the longer PCI is delayed the less therapy was given. Diercks and coworkers obtained similar results in 2007 [6]. Using a secondary analysis from CRUSADE observational registry, Dickers and colleagues were able to demonstrate that, for patients with NSTEMI, ER stays were associated with decreased used of guideline-recommended therapies and a higher risk of recurrent myocardial infraction. Causes of this inverse correlation between the ER time permanence and guidelines adherence were not investigated by Dickers, they generically shift the blame to overcrowding and actually emergency department crowding delays administration of life threatening therapy as antiplatelet therapy [7]. Although we are not able to determine a root cause for the association trough ER crowding, prolonged ER stay and lower likelihood of receiving guideline-appropriate care, anyone who has spent time in the ER knows that emergency care is focused on the first few minutes of treatment. After that, the emergency care team is obliged to shift his attention to other patients with other emergency. Patients who undergo to PCI after 72hr are probably patients whose diagnosis was not obvious and who required hours to be assessed properly. As a result, patients were not perceived “urgent” or “at risk” but rather “already stabilized”, independently to the real risk, and the emergency care team prioritizes the next “unstable” patient knocking to ER door. We were not able to highlight any correlation trough high risk factors (as diabetes or a cardiovascular disease already settled), severity scores (GRACE or TIMI) and the PCI timing, confirming that both PCI timing and administrated therapy are not related only to patient’s conditions but are driven by some other independent factor. It should also consider that the great majority of patients whom underwent PCI within the first 24hrs were treated in the HUB hospital. It was observed that hospitals with higher revascularization capability provide higher quality of care for patients with acute coronary syndromes [6]. We already discussed the differences between HUB and SPOKE adherence to guidelines [4], and we cannot exclude that different skills between HUB and SPOKE staff could have been influenced the analysis. This could be related the earlier involvement of the specialist in the hospitals with the hemodynamic laboratory available 24hr/24hr; it has been shown that patients with acute myocardial infarction had a reduced mortality when they are treated by a specialist [9].

Even if it is difficult to evaluate, this differences in skills could be reduced by a training program for the staff of the ER [10].

Regardless to reasons why patient’s standard of care is reduced prolonging permanence in ER, an early transfer to a more appropriate impatient service, that is not so influenced by overcrowding, would be desirable as soon as the diagnosis of NSTEMI is suspected (i.e. the ward of emergency medicine or cardiology, cardiological intensive care unit, etc.). On the other hand, the emergency staff should undergo to systematical training program in order to improve the adherence to the guidelines treatment recommendations. According with these observations, SIMEU Lazio in 2015 promoted a new prospective study in which it has been evaluated the impact on guidelines adherence of a training program.

Table 1. Percent of patients resulted positive to one of the main risk factors and co-morbidity. Data are shown both as total (TOT) and as grouped according to time windows in which PCI was performed. The risk stratification (High, Intermediate and Low) is in accordance with what proposed by ESC guidelines 2011. c2 tests the null hypothesis that there are no differences within groups. * p<0.05. 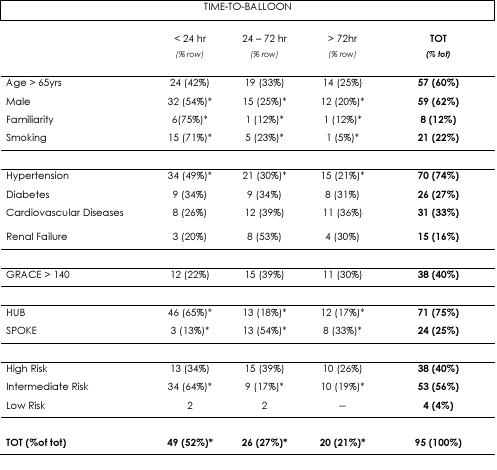 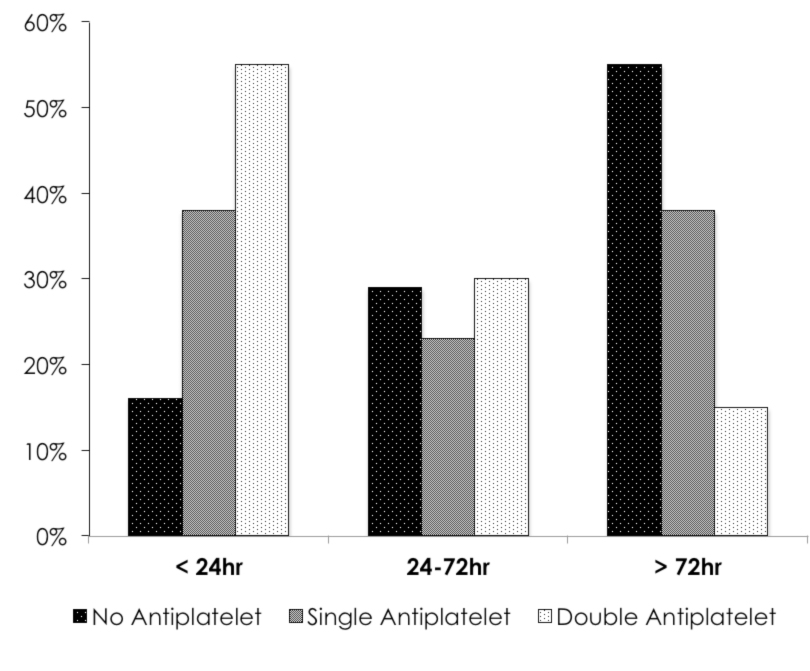